By Mary Anne Potts
Roughly a thousand miles southwest of San Francisco, Ben Lecomte, a 52-year-old French long-distance swimmer, is exploring one of the ocean’s most polluted places. It’s day 71 of his 80-day swim across the Great Pacific Garbage Patch, a swirling repository for some 1.8 trillion pieces of plastic weighing nearly 90,000 tons. He’s dubbed the project the Vortex Swim and his route is determined by University of Hawaii scientists using satellite imagery and ocean modeling to locate the highest concentrations of debris. When they locate a particularly trashy spot, Lecomte jumps in from his 67-foot sailboat. 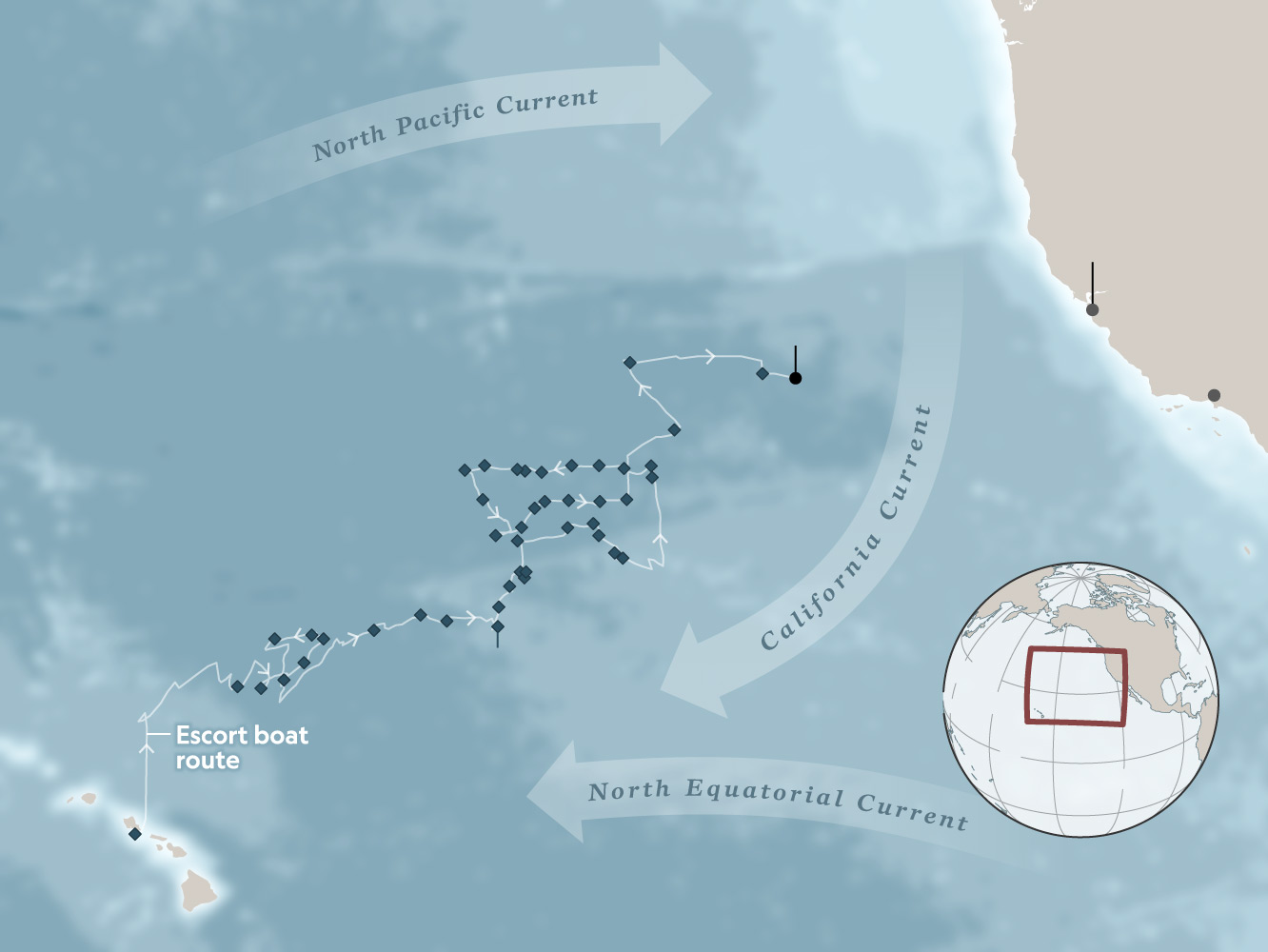 In 1998, Lecomte completed what he claimed was the first swim across the Atlantic Ocean, supported by a boat, but without using a kick board. In 2018, he attempted to swim from Japan to California to complete the world’s longest swim, but after traveling 1,500 nautical miles in 165 days, he had to cancel the last leg due to damage to his support boat. He encountered so much plastic during that attempt that he was inspired to plan a swim through the epicenter of marine plastic waste.

Get more of the inspiring photos and stories we’re known for, plus special offers.

By signing up for this email, you are agreeing to receive news, offers, and information from National Geographic Partners, LLC and our partners. Click here to visit our Privacy Policy. Easy unsubscribe links are provided in every email.

The Great Pacific Garbage Patch is one of five gyres, or vortexes, where currents have concentrated debris that has ended up in the ocean. It is estimated to cover a surface area twice the size of Texas and contains layers of discarded plastics, from large fishing equipment to detergent bottles to tiny degraded beads. During his swim, Lecomte’s 10-person team is collecting data and water samples to study the proliferation of microplastics and, even more insidious, microfibers.

We spoke with Lecomte via Skype to hear what he’s finding.

The Great Pacific Garbage Patch covers more than a thousand miles. As someone who’s interested in record-setting distance swims, why are you only swimming 300 nautical miles?

The 300 nautical miles are kind of a representation—one nautical mile for every million tons of plastic being produced globally each year. This swim is more about the data and samples we collect. Our scientific team is determining where we go and where I swim, depending on the different eddies within the Great Pacific Garbage Patch.

What kinds of debris have you been encountering so far?

A lot of it is fishing gear and fishing-related gear, like ghost nets or crates. You also have plastic debris that comes directly from human activity on land: household products, like little barrels of detergent, soy sauce, bottles of water, caps. I see them and think, oh, I’ve seen that on the shelf. I’ve seen that at home.

Beneath the surface, those pieces have been broken down into microplastics. It’s very hard to see them. Just because you can’t see it from the surface, doesn’t mean that it’s not there. When I swim, I can see that there are a lot of microplastics within the water column.

After that, you have another level, something we don’t see but we still collect data on—microfibers. We filter water to be analyzed, because we don’t have the equipment on board, to see how much microfiber there is.

Can you describe what it is like to swim through the microplastics?

It’s like a fog or a soup or a smog. That’s what we see with the naked eye. At first, I thought I was seeing plankton in the water, the reflection of the sun bouncing off the plankton. Then one day I had a little net in my hand to catch what I thought was plankton. I found out it was microplastics.

If I am confused by them, I understand easily that sea life is confused, too. We have found plastic in the stomachs of dead fish. We have seen an albatross picking up microplastics on the surface of the water. And we see microplastics embedded in small sea life, like jellyfish or plankton.

Have you seen whales in the Garbage Patch?

We have seen whales more than once. The most recent time, I was in the water. We heard the sounds of the whales right in the midst of a place that had one of our highest counts of microplastics. We towed a net for 30 minutes, and only a very small volume of water went through it. We counted over 3,000 pieces of microplastic in that sample.

On your Instagram feed, there’s a photo of a plastic toothbrush you found. What else have you found?

Left: A member of Lecomte’s team swims beneath a “ghost net,” a fishing net either lost or tossed over by a fishing crew. The nets entangle sea life and sometimes move creatures from coastal ecosystems out farther into the open ocean.

You also posted about finding a large number of “ghost nets.” What are those?

We like to think they are nets that broke off the boat and the fishermen don’t realize it. But when you look at the way they are tied together, I tend to think it is done intentionally. When the fishermen don’t want a wornout net anymore, it’s easier to just drop it overboard with other gear they are not going to use.

It creates a problem since sea life can get tangled in them. Two days ago, we saw three or four sperm whales with ghost nets around them.

I’ve seen a few nets with dead fish and a whole ecosystem is created around it. Coastal fish get caught in the those nets and find themselves in the middle of the ocean because those nets just drift with the currents. One time, I was trying to help a fish get out and a couple others in there were dead. When I tried to shake the net, one of the dead fish sank to the bottom. A shark came right underneath and ate that fish.

Left: The team collects samples from the fish they catch and from the nets they sweep through the water. The plastic next to this Mahi-Mahi was found inside its stomach.
Right: A team member holds a jar of 2,409 pieces of plastic collected from the water in

Are there any other people out there?

We have had the great opportunity to have two rendezvous. One was Charles Moore, who discovered the Great Pacific Garbage Patch in 1997. I had met him before on land, but it was amazing to see him on his boat in the Garbage Patch. He returns throughout the year to see how it progresses. We spent a day with him.

We also spent a day with the Ocean Cleanup team, who created a system to collect some of the plastic in the Great Pacific Garbage Patch. The project was founded by Boyan Slat in 2013 when he was 16. It was first designed and deployed from San Francisco a few months ago, but that system broke because of fatigue. They went back to the drawing board to create a new design that is much smaller. I was able to swim outside the device, inside the device. That’s something they themselves are not allowed to do, because of liability, so we have a very unique perspective on that.

Do you need to wear a special wetsuit to swim in the Garbage Patch?

I just use a regular wetsuit because of the water temperature and jellyfish. And because if you stay a few hours at the surface of the water, you are going to get sunburn on your back and shoulders.

After this expedition is done, what are you going to do with the data you’ve collected?

The expedition is going to finish on August 31, 2019. I will arrive after the last leg of the swim—around the Golden Gate Bridge to Crissy Field East Beach—at about 11:00 a.m. Anybody is invited to come to the celebration. Then our work on land is going to start. All the data and samples we have collected will be sent to university scientists working with us.

Are there items people should consider not using if they don’t want to add to the Garbage Patch?

I don’t think plastic is wrong. I think what is wrong is the way we use plastic. We look at it as something very convenient. We don’t care what happens to it once we use it, but plastic carries a lot of chemicals. Fish are going to eat that, it’s going to be concentrated as it moves up the food chain, and at the end of the food chain, well, usually it’s humans.

Personally, I try to stay away from single-use plastic. I also try to move to natural clothing fibers, like cotton or wool, and find something that is not made of synthetic fiber. It’s a hard process, because we have habits that are very ingrained in our daily lives. We rely on plastic and go with the easy choice, so it takes some thinking and habit changing in order to have an impact. We don’t have to do that perfectly, but we all have to do something.