The amount of greenhouse gases is increasing at an accelerating rate. As my friend Eric Holthaus (quoted in the article) says, this is not a time to simply figure we’re all dead and give up. What it IS is time to immediately stop the use of all fossil fuels NOW.

The past five years have been the warmest years since records began in the late 1800s, according to NASA and NOAA. USA TODAY

Carbon dioxide levels in Earth’s atmosphere hit a stunning milestone over the weekend.

“We don’t know a planet like this,” Eric Holthaus, a meteorologist and writer at Grist, an online environmental magazine, posted on Twitter.

Carbon dioxide (CO2) concentrations have skyrocketed far higher than any levels in more than 800,000 years, according to data from the Scripps Institution of Oceanography at the University of California-San Diego, and levels have not been this high for millions of years, Holthaus said.

“This is the first time in human history our planet’s atmosphere has had more than 415 ppm CO2,” Holthaus tweeted. “Not just in recorded history, not just since the invention of agriculture 10,000 years ago. Since before modern humans existed millions of years ago.”

This is the first time in human history our planet’s atmosphere has had more than 415ppm CO2.

Not just in recorded history, not just since the invention of agriculture 10,000 years ago. Since before modern humans existed millions of years ago.

6,759 people are talking about this 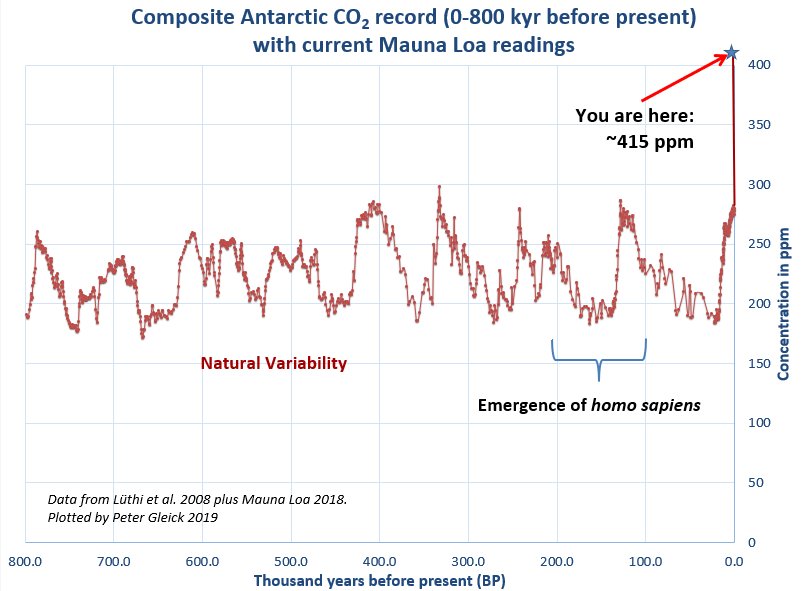 Carbon dioxide levels millions of years ago were higher than 2019 levels, but Earth’s temperatures were also far higher. In the 800,000 years before the Industrial Revolution, CO2 levels didn’t surpass 300 parts per million.

Homo sapiens didn’t emerge until about 300,000 years ago, and some of their predecessors were around about 2 million years ago.

CO2 is the greenhouse gas scientists say is most responsible for global warming. When fossil fuels such as coal, oil and gas are burned to power our world, they release CO2 and other greenhouse gases such as methane. These gases trap solar radiation in the atmosphere.

There is widespread scientific consensus that humans caused the recent warming in Earth’s atmosphere.

The temperature rise cannot be explained by natural factors, scientists said. In the past 20 years, the world’s temperature has risen about two-thirds of a degree Fahrenheit, the National Oceanic and Atmospheric Administration said.

Using computer simulations along with paleoclimatic data, a study this year from the Potsdam Institute for Climate Impact Research reported that carbon dioxide has reached levels in our atmosphere not seen in 3 million years.

Ralph Keeling, the director of the Scripps program that tracks CO2 concentrations, said in a statement, “The average growth rate is remaining on the high end. The increase from last year will probably be around three parts per million whereas the recent average has been 2.5 ppm.”

Since 1958, Keeling and his father, Charles David Keeling, have measured carbon dioxide levels at the Mauna Loa Observatory, and their work is responsible for creating the Keeling Curve, a graph that shows CO2 accumulations.

Looking ahead, a study from the University of Michigan found that CO2 emissions could soar to levels not seen in 56 million years by the middle of next century.