Yesterday, I posted a broader list. These two are just plain scary.

THE UNINHABITABLE EARTH
Life After Warming
By David Wallace-Wells

Climate change is the greatest challenge humanity has collectively faced. That challenge is, to put it mildly, practical; but it also poses a problem to the imagination. Our politics, our societies, are arranged around individual and group interests. These interests have to do with class, or ethnicity, or gender, or economics — make your own list. By asserting these interests, we call out to each other so that as a collective we see and hear one another. From that beginning, we construct the three overlapping, interacting R’s of recognition, representation and rights.

The problem with climate change, as an existential challenge to humanity, is that the interest-based model of society and politics doesn’t work. Most of the people in whose interest we are demanding action aren’t here. They haven’t been born yet. And because the areas first and most affected by climate change are the poorest regions of earth, we are talking about the least seen, least represented group on our planet. We have to imagine these people into being, and then grant them rights, and then take unprecedented, society-wide action on that basis.

The demand climate change makes on us is to feel empathy for the unborn poor of the global south, and change our economies to act on the basis of their needs. That’s something humanity has never done before.

Pessimism would be an ethical catastrophe. It leads only to despair, despair to inaction, and inaction to a future world David Attenborough has described as “the collapse of our civilizations and the extinction of much of the natural world.” To avoid the most terrible possible versions of our future, we have to stay positive; it’s the only moral response to this crisis. And there are grounds to do so, as David Wallace-Wells argues in his brilliant new book, “The Uninhabitable Earth: Life After Warming”: “We have all the tools we need, today, to stop it all: a carbon tax and the political apparatus to aggressively phase out dirty energy, a new approach to agricultural practices and a shift away from beef and dairy in the global diet; and public investment in green energy and carbon capture.

Global emissions could be cut by a third if the richest 10 percent of humanity cut their use of energy to the same level as affluent, comfortable Europe. One prospective technique to scrub carbon from the atmosphere would cost $3 trillion a year, a colossal amount — but significantly less than the current level of subsidies paid out globally for fossil fuel, estimated at $5 trillion. Taken all in all, solutions are “obvious” and “available.” The only obstacle to implementing them is political will.

This litany of ideas might make “The Uninhabitable Earth” sound upbeat. That would be misleading. At the heart of Wallace-Wells’s book is a remorseless, near-unbearable account of what we are doing to our planet. Climate change is “not just the biggest threat human life on the planet has ever faced but a threat of an entirely different category and scale,” he writes. Even if collective action manages to keep us to 2 degrees Celsius of warming — a target it looks like we are currently on course to miss — we would be facing a world in which “the ice sheets will begin their collapse, global G.D.P. per capita will be cut by 13 percent, 400 million more people will suffer from water scarcity, major cities in the equatorial band of the planet will become unlivable, and even in the northern latitudes heat waves will kill thousands each summer.”

But remember, he writes, “this is our best case scenario.” Wallace-Wells takes us through a compendium of the ways in which things could get so much worse, from simple “heat death” through catastrophic storms, droughts, flooding, wildfires, pollution, plague, economic collapse and war. We will see migration on a scale the world has never experienced: United Nations and World Bank estimates of how many people will be forcibly displaced by the middle of this century range from the tens to the hundreds of millions. All of this will affect the world’s poor far more than the world’s rich. The innocent, who have done the least to damage the environment through the consumption of fossil fuels, will suffer more than the guilty.

“The Uninhabitable Earth” gives readers’ emotions a thorough workout along that pessimism-to-despair spectrum, before we are brought round to the writer’s “acceptance of responsibility.” I stress the emotional aspect because it is crucial: We are facing a call to action that we are, on the evidence of our behavior so far, likely to ignore, unless we directly feel its urgency. We know this, because that’s what we have been doing. The science of global warming has been settled for 40 years, but we have not just continued to pollute, we have accelerated the rate at which we’ve been doing so. Most of the carbon humans have put into the atmosphere has been emitted in the last three decades. As Wallace-Wells tartly puts it, “We have done as much damage to the fate of the planet and its ability to sustain human life and civilization since Al Gore published his first book on the climate than in all the centuries — all the millenniums — that came before.”

This is part of the tragedy. It’s not just that we know what’s happening, it’s that we’ve known for years and done nothing. Nathaniel Rich observes in “Losing Earth: A Recent History” that “nearly every conversation we have in 2019 about climate change was being held in 1979.” His gripping, depressing, revelatory book is an expanded version of a whole-issue article that appeared in The New York Times Magazine last year. It is an account of what went wrong — of how it was that a moment of growing awareness of climate change, and an apparent willingness to act on the knowledge, was allowed to dissipate into stasis and inaction. 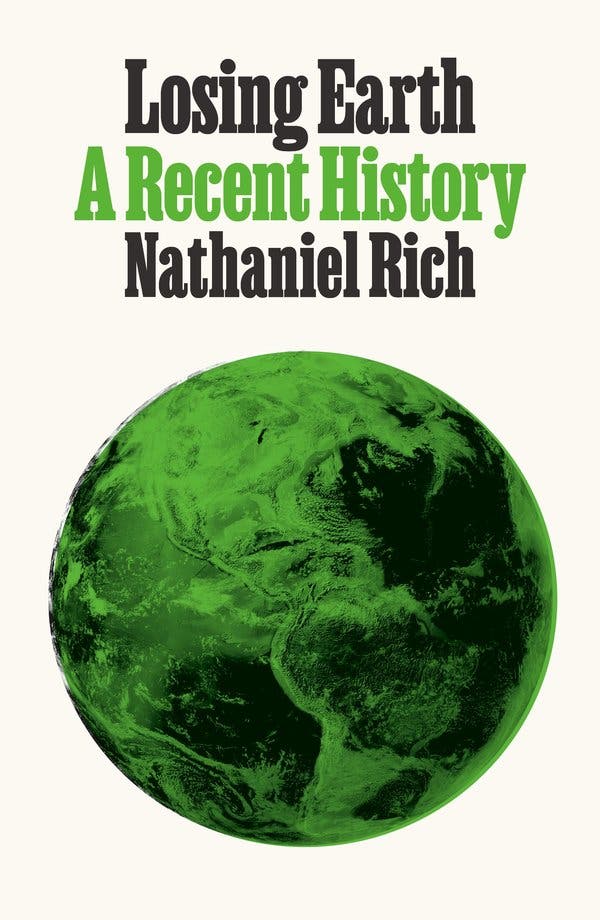 The story runs from 1979 to 1989. Rich frames his narrative through a central character, Rafe Pomerance, a Friends of the Earth lobbyist who first came across the issue of global warming in a 1979 E.P.A. report. In the ’80s, Congress had several hearings into climate change, which was accepted as an urgent priority even by a figure as conservative and anti-intellectual as Dan Quayle: “The greenhouse effect is an important environmental issue. We need to get on with it.”

So why didn’t they?

Rich offers a number of reasons. Scientists struggled to put across a clear message with sufficient force, for one. Pomerance looked with envy at the clarity with which the “hole in the ozone layer” was targeted for action by concerned scientists, notwithstanding the fact that, as Rich writes, “there was no hole, and there was no layer.” The climate scientists’ honorable struggles with complexity, probability models and time-lags between cause and effect helped dilute the impact of their message. A 1983 report by the Academy of Sciences, “Changing Climate,” was interpreted as calling for “caution not panic.” Roger Revelle, one of America’s leading scientists and author of a 1957 paper that was one of the first to describe the greenhouse effect, said that “we’re flashing a yellow light but not a red light. It’s not an unmitigated disaster by any means. It’s just a change.” The effect of all this was that the fight against climate change lost momentum at a critical point.

The greater part of responsibility for the failure, however, lies with politicians and energy companies. The big fossil fuel firms knew the realities of human-caused climate change but chose to ignore them and to lobby for the right to damage the environment; the Republican Party had factions that were in league with Big Energy, overlapping with other factions in denial about the scientific realities. The Reagan administration fought hard against environmental protections of any kind; the Bush administration made rhetorical gestures but John Sununu, George H.W. Bush’s chief of staff, did not believe in anthropogenic climate change and fought the scientists hard, and ultimately successfully.

The first meeting of the Intergovernmental Panel on Climate Change in 1989 ended without the thing it was convened to achieve, binding targets on global emissions. With American leadership, Rich writes, “warming could have been held to less than 1.5 degrees.” The United States chose to shoot down the agreement. “And with that a decade of excruciating, painful, exhilarating progress turned to air.” More carbon has been emitted into the atmosphere since that 1989 conference than in the preceding history of civilization.

Climate change is a tragedy, but Rich makes clear that it is also a crime — a thing that bad people knowingly made worse, for their personal gain. That, I suspect, is one of the many aspects to the climate change battle that posterity will find it hard to believe, and impossible to forgive.

John Lanchester is the author, most recently, of “The Wall.”