The voices of school children and environmentalists calling for immediate cessation of the production and use of fossil fuels are not radical or extreme. They’re trying to prevent disaster within our own lifetimes.

Global warming could temporarily hit 1.5C above pre-industrial levels for the first time between now and 2023, according to a long-term forecast by the Met Office.

Meteorologists said there was a 10% chance of a year in which the average temperature rise exceeds 1.5C, which is the lowest of the two Paris agreement targets set for the end of the century. 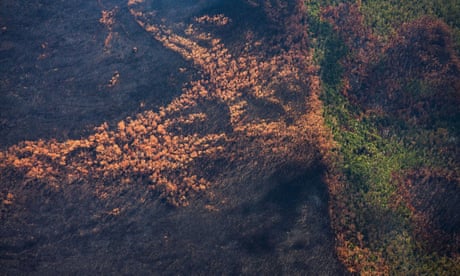 Until now, the hottest year on record was 2016, when the planet warmed 1.11C above pre-industrial levels, but the long-term trend is upward.

Man-made greenhouse gases in the atmosphere are adding 0.2C of warming each decade but the incline of temperature charts is jagged due to natural variation: hotter El Niño years zig above the average, while cooler La Ninã years zag below.

In the five-year forecast released on Wednesday, the Met Office highlights the first possibility of a natural El Niño combining with global warming to exceed the 1.5C mark.

Dr Doug Smith, Met Office research fellow, said: “A run of temperatures of 1C or above would increase the risk of a temporary excursion above the threshold of 1.5C above pre-industrial levels. Predictions now suggest around a 10% chance of at least one year between 2019 and 2023 temporarily exceeding 1.5C.”

Climatologists stressed this did not mean the world had broken the Paris agreement 80 years ahead of schedule because international temperature targets are based on 30-year averages.

“Exceeding 1.5C in one given year does not mean that the 1.5C goal has been breached and can be redirected towards the bin,” said Joeri Rogelj, a lecturer at the Grantham Institute. “The noise in the annual temperatures should not distract from the long-term trend.”

Although it would be an outlier, scientists said the first appearance in their long-term forecasts of such a “temporary excursion” was worrying, particularly for regions that are usually hard hit by extreme weather related to El Niño. This includes western Australia, South America, south and west Africa, and the Indian monsoon belt.

They also noted that the probability of 1.5C years would steadily increase unless emissions were rapidly scaled back.

“It’s a warning that we’re getting close to that level,” Prof Adam Scaife, the head of long-range prediction at the Met Office, told the Guardian. “We’re not saying there is a current risk of breaching the Paris agreement. What we are saying is that for the first time, we are seeing a chance of a temporary rise of 1.5C due to a combination of global warming and natural climate variation.”

The Met Office said previous results had demonstrated the accuracy of such “decadal reports”, which cover the ground between short-term weather forecasts and long-range climate models.

Since 2014, the world has experienced the four hottest years since records began in 1850, but these highs are likely to be exceeded soon. From now until 2023, the Met has 90% confidence that mean annual temperatures will range between 1.03C and 1.57C above pre-industrial levels.

The recent United Nations Intergovernmental Panel on Climate Change report on warming of 1.5C, highlighted the calamitous difference even a fraction of a degree above could make to coral reefs, Arctic ecosystems and hundreds of millions of lives. Starting now, the report said emissions would have to be cut by 45% by 2030 to have any chance of holding to that level.

“Breaching 1.5C of global warming does indeed mean that we failed to limit warming to that ‘safe’ level, but not that our understanding of a safe level of climate change has suddenly changed and climate change should go unchecked,” said Rogelj, who was was a coordinating lead author on the UN report. “Every tenth of a degree matters. So if 1.5C of global warming would be exceeded for whatever reason, this would be a call for steeper emissions reductions.”