This leaves out a video at the top of the article. Go to the link to see it:

If you already have the Series 3, you should also look at this for a comparison:

Apple Watch Series 4: Six reasons to upgrade (and one big reason not to)

The screen is awesome but the price isn’t

For the first time since its introduction four years ago, the Apple Watch has a new design—and we don’t just mean the addition of a red dot on the Digital Crown. The new fourth-generation watch includes a larger screen and a slightly bigger case, but still retains the classic styling that has made the Apple Watch a worldwide hit.

But the beauty of the new Apple Watch isn’t skin deep. We can’t wait to get our fingers on that new display, but there’s way more to it than a few extra pixels. Here are six more reasons you’ll want to upgrade to a new Apple Watch and one reason why you might want to wait:

The design is better than ever

If you look at Apple Watch, you probably won’t notice any major changes to the case: It’s still square, it still has a Digital Crown, it still has a single button on the side. But if you look closer, you’ll see subtle changes that improve the look and feel of the Apple Watch. For one, the screen is way bigger, with more than 30 percent more pixels. It’s also thinner, so even though the cases are two millimeters bigger than the previous generation at 40mm and 44mm, respectively, the entire package should feel less substantial.

[ Further reading: How to calibrate your TV ] 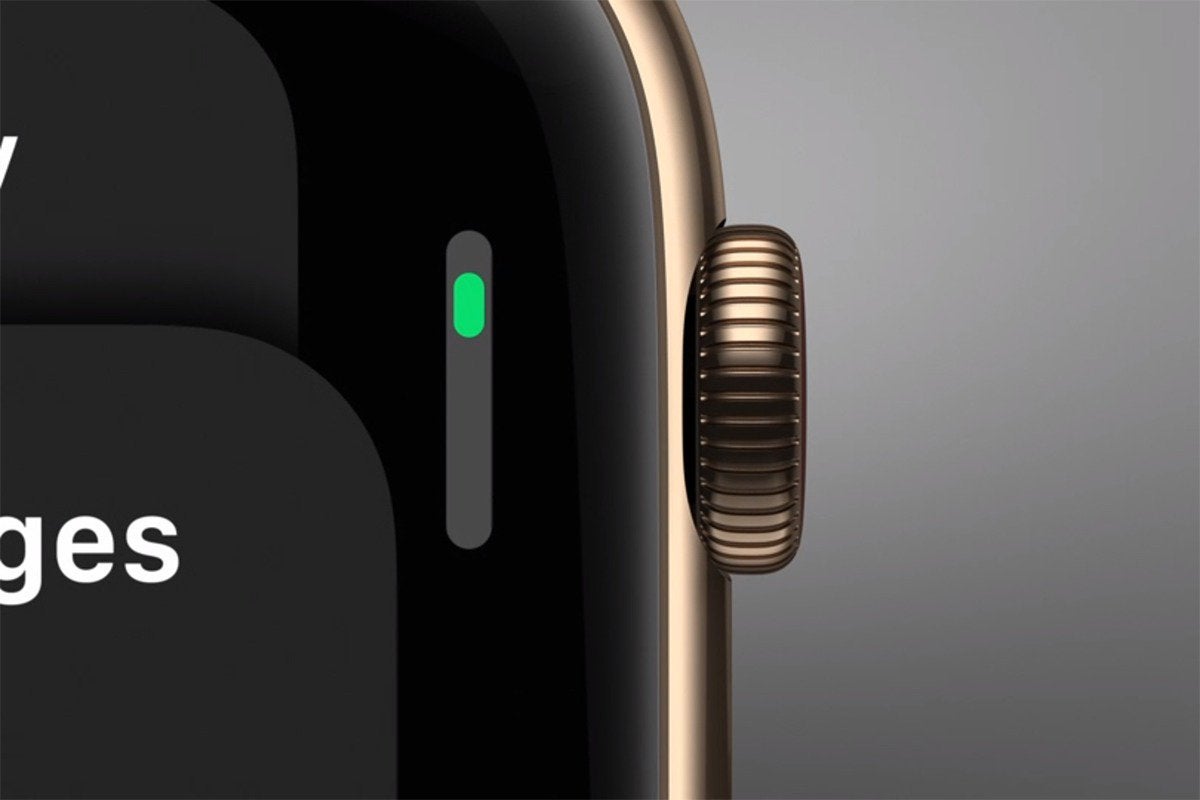 Apple
The Digital Crown on the Apple Watch Series 4 does a whole lot more.

Additionally, the corners have deeper curves, so it’ll look even better on you wrist. The microphone placement has been moved to make phone calls clearer, the back is made of black ceramic and sapphire to improve connectivity, and the speaker is 50 percent louder so all those Siri requests will sound even better.

There are way more faces

To accompany the 30-percent larger screen, Apple designed several new faces to take advantage of the extra real estate, starting with an update to its classic Utility face with space for up to eight complications now. Apple showed off a face with either three international clocks or three contact circles, so the possibilities are kind of endless.

If you don’t want to fill up your screen with complications, there are also all-new designer faces for the Apple Watch Series 4. There’s a new Breathe face that gives you animated guides when you need to take a stress break, as well as Fire, Water, and Vapor faces that fill your screen with lush, fluid animations whenever you raise your wrist. And finally, if you want a Nike Series 4 Apple Watch, those faces have been reimagined as well.

The Digital Crown is super-charged

On previous Apple Watches, the Digital Crown pretty much served two functions: going home and scrolling. It still does those things on Apple Watch Series 4, but you’ll now receive haptic feedback as you navigate your watch so you won’t scroll too fast. That’s nice and all, but the biggest enhancement to the Digital Crown is one you won’t see: an electrical heart sensor.

That’s right, you can now take an electrocardiogram (ECG) right on your wrist. Just press your finger against the side of the crown and your watch will start measuring your heart rhythm, recording the data in the Apple Health app and alerting you to irregular patterns. Not only has it already received FDA approval, but Apple says it is the first ECG sensor offered over the counter directly to consumers.

It’ll know when you fall

In addition to a new S4 chip, which is up to two times faster than the previous generation, Apple has also added a next-generation accelerometer and gyroscope to the new Apple Watch, which will make measuring movements up to eight times faster. That’s great for exercising, but there’s a cool new trick the new watch can do too: detect falls.

We’ve all seen the commercial where the elderly woman falls and screams, “I’ve fallen and I can’t get up!” Now, your Apple Watch can detect when you’ve fallen and instantly send you an alert with an SOS button that will call 911 when pressed. And what’s more, if your watch detects that you haven’t moved for a minute following a fall, it will alert the authorities and provide your location.

It could save your life in a whole new way

We’ve all heard stories about how the Apple Watch has saved people’s lives by alerting them to a high resting heart beat, but now Apple has added two new heart rate detection features to the new watch. Firstly, it’ll notify you if your heart rate is too low. And it’ll also monitor your heart rhythm and alert you if it detects an irregular rhythm, which could be a warning sign of atrial fibrillation, which could lead to blood clots, strokes, and heart failure.

Your old bands will still work

Despite being slightly larger than the previous generations of watches, all of the old bands you’ve collected will still work, as well as any third-party ones. And there’s a cool new one: Nike has added reflective yarn to its Loop band so runners and bicyclists will be even more visible at night.

The kicker to the new Apple Watch Series 4 is that it’s a lot more expensive than the Series 3 watch. Apple Watch Series 4 with GPS starts at $399 now, rather than $299 before. And if you want one of the cellular models, it’ll cost you an additional $100, starting at $499. So you won’t be able to buy as many watch bands to go with it.

Michael Simon covers all things mobile for PCWorld and Macworld. You can usually find him with his nose buried in a screen. The best way to yell at him is on Twitter.