Meet the California farmers awash in Colorado River water, even in a drought

Sprinklers deliver vital Colorado River water to a field of celery in California’s Imperial Valley. The Imperial Irrigation District draws enough water from the river each year to cover 470,000 acres with 5 feet of water.

EL CENTRO, Calif. — A few hundred farms in the southern tip of California, along the Mexican border, may hold the key to saving the drought-plagued Colorado River from collapse.

These farmers, in Imperial County, currently draw more water from the Colorado River than all of Arizona and Nevada combined. They inherited the legal right to use that water, but they’re now under pressure to give up some of it.

The Imperial Valley is a place of jarring contrasts. Half is in its natural state, a bone-dry desert. The other half is mile after mile of green fields lined by irrigation canals. A few of the fields are shrouded by showers of water delivered from long lines of sprinklers.

Steve Benson, managing partner of Benson Farms, points out a neighbor’s field where a crew is planting lettuce.

“It’s very early planting,” he says. “There’s been a bad crop in northern California. So it’s been a high market. They’re trying to jump on the market early and have the first lettuce to be harvested.”

That lettuce will be in grocery stores by mid-November. Other fields are covered with alfalfa or grass that will become feed for cattle. 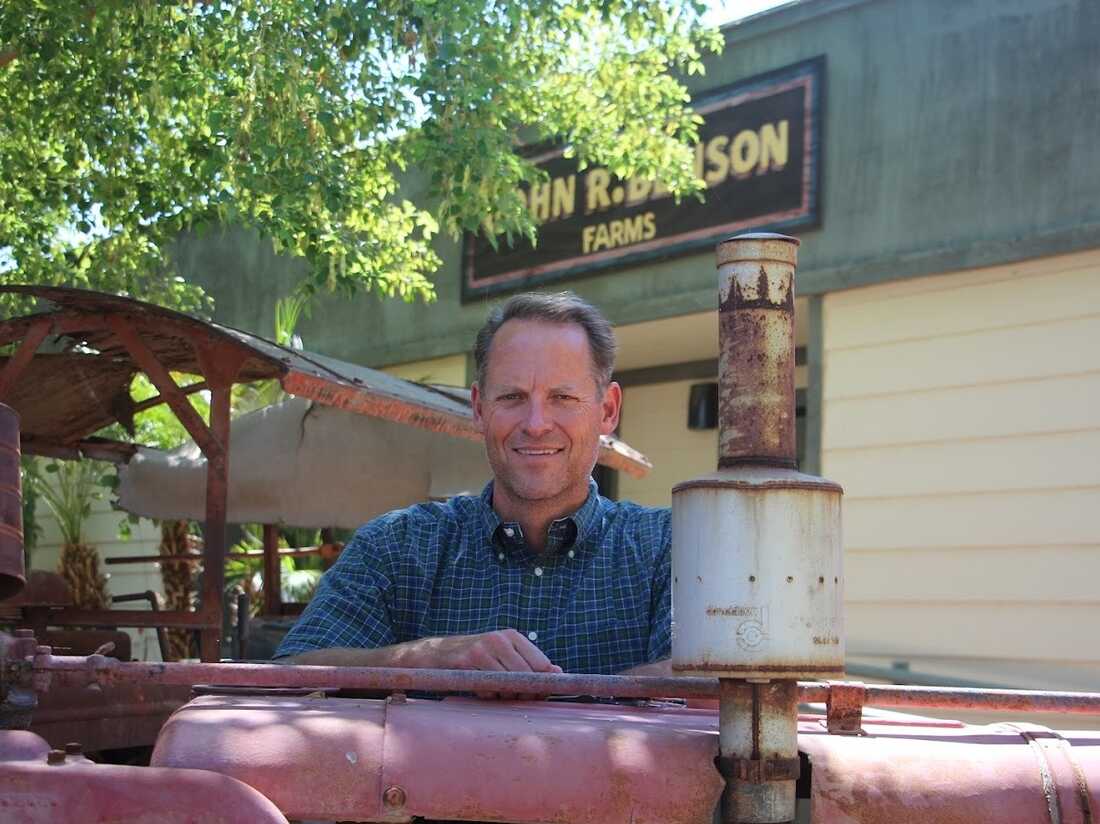 Steve Benson returned to the family business, Benson Farms in Brawley, Calif., after a career in engineering and real estate.

This area gets less attention than California’s Central Valley, the nation’s leading producer of produce and nuts, which draws its water from rain and snow in the Sierra Mountains, or pumps it from shrinking underground aquifers. The Imperial Valley, by contrast, has only one source of water: the Colorado River, 80 miles to the east.

The New Deal brings Colorado River water to a desert

These fields owe their existence to fortune-seeking land speculators and engineers who, starting in 1901, dug a canal to bring water to this valley from the Colorado River. Geography was the key. Most of the Imperial Valley actually lies below sea level, and well below the canal’s starting point on the Colorado River near Yuma, Ariz. This allowed water to flow through the canal powered solely by gravity. 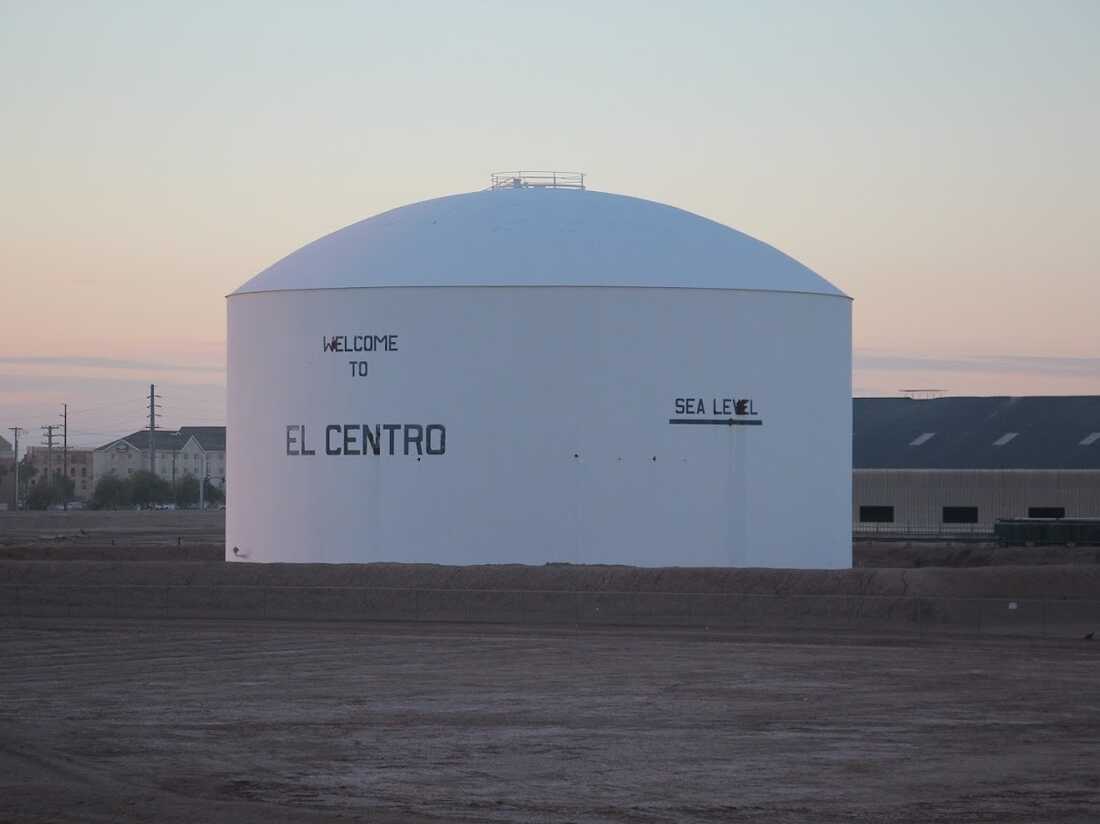 The water tower in El Centro, the county seat of Imperial County, notes a geographic fact that shapes this area’s destiny. It lies below sea level, allowing water from the Colorado River to flow there by gravity alone.

Construction of the original canal was marked by epic engineering failure. After heavy rains in 1905, the raging Colorado burst out of its normal channel, into the unfinished construction project, and carved a new, uncontrolled path into the Imperial Valley, creating an enormous lake called the Salton Sea. It took two years to redirect the river back into its original channel. The Salton Sea still exists, although it’s in deep trouble. It’s now more salty than the ocean, heavily contaminated with agricultural runoff, and shrinking.

The current canal, built during the New Deal and called the All-American Canal, delivers enough water to the Imperial Irrigation District (IID) each year to cover all of its irrigated land – almost 800 square miles – with 5 feet of water.

But that flow of water is now in question, because the Colorado River doesn’t have enough water for everyone. The giant reservoirs of Lake Mead and Lake Powell are shrinking fast, and the federal government is calling on all users of the river’s water, which include farmers and cities such as Phoenix and Las Vegas, to come up with a plan to cut their water use.

Sarah Porter, who’s director of the Kyl Center for Water Policy at Arizona State University, says the Imperial Irrigation District is now at the center of these negotiations.

Water as property, backed-up by law

Imperial Valley farmers like Andrew Leimgruber, for their part, argue that they have a legal right to all of this water.

“We have the laws in place, you know, when water comes anywhere west of the Mississippi, it’s first-come, first-served, and that’s how it’s always been,” he says.

IID laid claim to water from the Colorado River before cities like Phoenix and Tucson showed up.

Going by established law, Leimgruber says, those latecomers would be cut off from Colorado River water completely before the Imperial Irrigation District gives up any of the water to which it’s entitled.

Andrew Leimgruber grows alfalfa and vegetables on his family’s farm in the Imperial Valley. His great-grandfather came to the valley from Sweden in the 1920s.

In reality, nobody really expects cities to get cut off completely. The farmers say they understand that people need water for health and safety – although maybe not for swimming pools and lawns.

They also know that this crisis is so severe that famers in the Imperial Valley will have to cut back, too. Their legal rights won’t do much good if there’s no more water arriving from Lake Mead.

A water conservation deal is in the works

“The river has a gun to everybody’s heads, and it’s in everybody’s interest to try to work out this thing,” says JB Hamby, a member of the irrigation district’s board of directors.

If nothing changes, within a few years, Lake Mead would drop to a level called “dead pool” and water would stop flowing through Hoover Dam. It would never reach the canal that supplies Imperial Valley.

Hamby says the district is looking to make a deal.

“I think we would rather come up with voluntary agreements to live with a little bit less, to ensure that we have water,” he says. “If you get to a point where you’re at dead pool, you have nothing at all.”

The All-American Canal carries water from the Imperial Dam, on the Colorado River near Yuma, Ariz., to a series of smaller distribution canals in the Imperial Valley.

According to Porter, some legal experts believe that the federal Bureau of Reclamation has the authority simply to order a reduction in water deliveries from reservoirs like Lake Mead to agricultural irrigation districts. Farmers, however, would almost certainly challenge such an order in court.

Instead, farmers are hoping for a deal in which the government will pay them to use less water. One draft plan that’s circulating among irrigation districts proposes annual payments of $1,500 per acre – almost $1.4 billion in total – in exchange for cutting water use by roughly 20 percent on almost a million acres of farmland. Half of those acres lie within the Imperial Irrigation District.

Similar deals have been struck in the past, although none involved so much money. In 2003, under pressure from the federal government, IID agreed to transfer about 10 percent of its total allotment of water each year to San Diego and another neighboring water district. In exchange, San Diego pays the irrigation district more than $100 million each year. Much of the money goes to pay for projects that conserve water.

Steve Benson says a further cut of 20 percent is feasible, but it does involve costs. Farmers could buy new, more water-efficient irrigation equipment. Irrigation canals that are currently simple ditches in the dirt could be lined with concrete, to prevent water from seeping into the ground. Farmers also could reduce the amount of land planted in crops, especially alfalfa and grasses, which get baled into hay to feed cattle or horses. Those forage crops, which cover the majority of the land, aren’t usually as valuable as vegetables.

A field of alfalfa, freshly cut, dries in the sun. It will be baled into hay and fed to cattle such as those in the feedlot at the far end of the field. Beef cattle are the top agricultural product of Imperial County.

“Instead of eight cuttings of alfalfa, we might turn off the water in the summer and dry up the field, and let it come back in the fall,” Benson says. “The reality is, we’ll probably be taking more of our summers off. My kids’ll be happy.”

Lurking in those details, though, is a bigger and more worrisome question. It’s about the future of the whole valley.

A deal affects more than farmers

Roughly 180,000 people, most of them Mexican-American, live here in towns that include El Centro, Calexico, and Brawley. Imperial County is already one of the poorest in California. Some fear that less water, and less farming, means fewer jobs and economic decline.

John Hernandez, a Mexican-American activist, says that there’s also a question of fairness if most of the money that the irrigation district gets for using less water – potentially hundreds of millions of dollars each year – gets passed out to just a few hundred farms.

“On the one hand, you have the most disadvantaged community, but in the same community you have some of the richest farmers!” he says. “Something is not right when that’s going on in the neighborhood.”

Hernandez says that the crisis on the Colorado River provides a time for the predominantly white people who’ve claimed that water — and the wealth and power that came with it – to share more of it.