For what it’s worth, I changed it back immediately because I didn’t want to give up any space currently dedicated to email.

Google changed Gmail’s design and some people are furious. Here’s how to change it back.

Everything else is changing around us, Google. There’s no need to alter our inboxes, too. 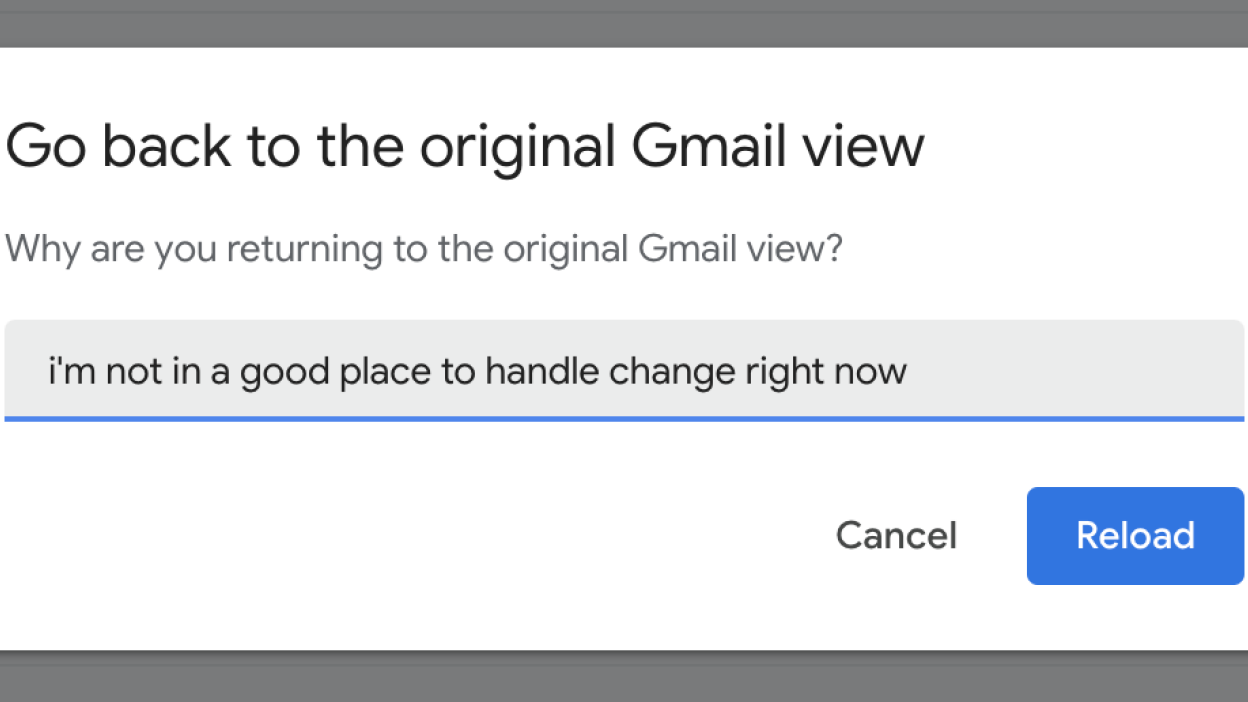 Google recently did the unthinkable: It changed the way Gmail looks…again.

It’s one of the great cardinal sins of the tech world — to make unexpected, unsolicited, and potentially unwanted changes to something so familiar, and indeed so essential to our daily existence. What is life if not an endless stream of unwanted emails, gradually making your unread inbox number tick up for eternity?

Naturally, this Gmail design update has some users up in arms. But also others are fine with it. So let’s go over what’s changed, what people are saying about it, and how you can revert your Gmail inbox back to the way it used to be in an instant.

How is Gmail different now?

If you’ve opened your inbox in the last 24 hours or so, you’ve possibly already seen the changes. Google automatically enabled them for anyone who has Chat turned on within Gmail. If that’s not the case, however, the best summary I can give is that Google redesigned the left sidebar and changed the font. I didn’t really notice the latter part because my eyes are bad with fonts. (I worry that makes me a bad journalist sometimes.) Anyway, back to the matter at hand.

Don’t worry about how many unreads are in my inbox. It’s none of your business. Credit: Google

The zones for Chat, Meet, and Spaces that used to live underneath all of the inboxes now live to their left, represented by icons. You can turn these icons on or off using the Quick Settings menu.

The actual inbox portion of Gmail, however, is largely the same, though it takes up less of the screen now that those icons are in place. No, I won’t include a screenshot of my way-too-crowded inbox for your perusal.

There’s also a small (but nice) functional change in the form of “search chips.” In other words, when you search your inbox, you can apply filters before searching for things like “Has attachment” and “From me” to get the exact result you’re looking for.

What the people are saying

Naturally, this earth-shattering Gmail redesign has some people excited and some people filled with incandescent rage…or at least a little peeved about the changes. I opened the modern day Athenian forum known as Mashable’s Slack channel this morning and found a range of opinions as wide as the Grand Canyon, starting with deputy entertainment editor Kristy Puchko’s righteous-fury-filled take on the matter:

“Instantly, I cringed, because this feels like a change without reason or warning. It’s harder to read, and immediately made me feel old. Hard pass. I immediately switched back to the old style, and Gmail demanded to know why. So I told them. Now, if you’ll excuse me, I have some youths to chase off my lawn.”

Mashable UK editor Shannon Connellan, on the other hand, very much vibes with what Google is doing:

“New Gmail? I weirdly don’t hate it. People do, but that periwinkle Compose pillow can happily support these Century Gothic dreams the new format has cast me into. So what my inbox is now a lot of icons, ready for use by an icon. I said what I said.”

As for Mashable’s executive editor Annie Colbert, she dislikes the change but acknowledged that it’s only a matter of time before it becomes second nature:

“The new Gmail feels like the Pinterest board of someone who owns a white sofa and rounded lucite coffee table. Is it my style? No, but like all design changes, I immediately cringe (why is it so hard to scan?!), and will give myself a week to get used to it.”

And finally, culture editor (and self-proclaimed stan of all things glitter) Crystal Bell found a way to change the theme color to pink and found herself right at home in the new, softer Gmail:

“As someone who uses her Gmail solely for email and Docs, the UI change really doesn’t faze me. I actually like the rounded corners on the Compose button. It’s aesthetically pleasing to me. And the new sans serif font?! It’s clean and minimalist. A perfect contrast to my new Barbie pink background. Embrace modernity, baby.”

How can I change the Gmail layout back?

No matter which side you’re on, it’s important to know that you can go back to the old Gmail with the press of a somewhat hidden button. Simply click the gear icon on the upper right corner of the Gmail screen to open the Quick Settings menu, where you can also change the theme and mess with other aspects of the page.

It’s right near the top, so you can’t miss it. Credit: Google

If the new Gmail absolutely sickens you to the core, click that “Go back to the original view” button. You’ll be prompted to explain why you don’t like the new version. But if you don’t think Google is worthy of your eloquently worded dissent, you can just click the revert button without entering anything into the text prompt. However, if filling it out with a rage-fueled screed makes your day better, go for it. Just remember a real person might have to read it at some point.

And thus, one of the great issues of our time has been thoroughly debated and solved. Great work today, everyone.