Cats know the names of other cats that are their friends, study says

Researchers believe that cats learn the names of their close contacts, whether human or feline 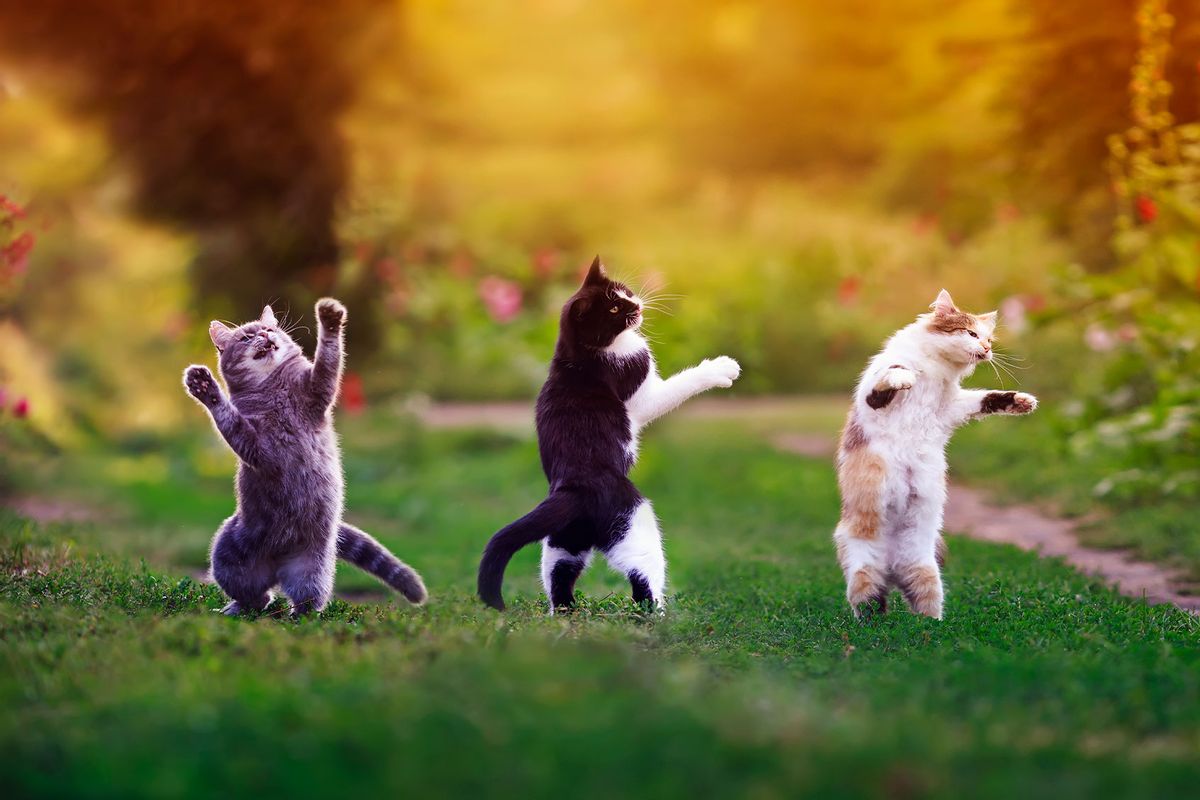 Three cats in a sunny meadow playing on the grass, standing/dancing on their hind legs (Getty Images/Nataba)

Humans are social creatures, and our individuality is so important to us that it is considered insulting to forget someone’s name. Yet one might think that cats, freed of human social customs, wouldn’t feel the pressure to remember each other’s names in the same way.

According to a new study, that assumption would be wrong. Researchers believe that cats recall both other cats and humans based on their specific names and specific faces.

RELATED: Human breeding of cats has made them look like they are always in pain

“We examined whether cats matched familiar cats’ names and faces… and human family members’ names and faces…” the authors explained in a study published by the journal Scientific Reports. For example, “Cats were presented with a photo of the familiar cat’s face on a laptop monitor after hearing the same cat’s name or another cat’s name called by the subject cat’s owner… or an experimenter.”

“It is still an open question how cats learn the other cats’ names and faces,” researchers note.

The studies found that household cats would pay attention to a given monitor for a longer period of time if the name that they heard did not match the face on the screen. Researchers say this indicates that the cats were expecting the “correct” name to be uttered and were confused when that did not happen. In turn, this indicates that the cats identified the names with the faces.

“These results indicate that only household cats anticipated a specific cat face upon hearing the cat’s name, suggesting that they matched the stimulus cat’s name and the specific individual,” the authors explain, differentiating household cats from “café cats,” or cats that live in cafés where strange people can freely interact with them. “Cats probably learn such name-face relationships by observing third-party interactions; a role for direct receipt of rewards or punishments seems highly unlikely. The ability to learn others’ names would involve a form of social learning.”

The authors added that the cats may also learn names and faces by observing other cats and humans, but they “could not identify the mechanism of learning.”

Takagi wrote to Salon that “we have found that cats listen carefully to human speech. I think cats and humans can get along better by talking to each other a lot and communicating.”

“It is still an open question how cats learn the other cats’ names and faces,” researchers note.

“What we discovered is astonishing,” Saho Takagi, a research fellow specializing in animal science at Azabu University in Kanagawa Prefecture and the initiator of the study from her work at Kyoto University, told The Asahi Shimbun. “I want people to know the truth. Felines do not appear to listen to people’s conversations, but as a matter of fact, they do.”

Takagi wrote to Salon that “we have found that cats listen carefully to human speech. I think cats and humans can get along better by talking to each other a lot and communicating.”

“Cats basically do not engage in referential vocal communication within the same species, so this may be an ability seen in the evolutionary process from wildcats to cats,” Takagi explained. “It may be the result of selection pressure to coexist with humans.”

Scientists also know that cats can feel emotional attachments to their human owners and cat friends, which provide them with a motivation to learn their names. It is rooted in evolution.

“Cats basically do not engage in referential vocal communication within the same species, so this may be an ability seen in the evolutionary process from wildcats to cats,” Takagi explained. “It may be the result of selection pressure to coexist with humans.”

“Cats certainly feel attachment to their owners which could be considered a form of affection or love,” Dr. Stacy Choczynski Johnson, a veterinarian, told Salon by email last year. “Even outdoor feral cats form an attachment bond because we provide food and shelter. We also bond with our cats through play and entertainment.”

There has been a flurry of research into cat cognition in the past few years. Recently, a large study of animals involved teaching them to use a button-word system to communicate their needs. At least one cat, a 13-year-old domestic cat named Billi, was able to use the system to appear to communicate with her owner, asking questions about the other pets in the house and seemingly communicating her hunger.

We also know that cats can struggle with communication due to human breeding. Certain facial deformities bred into cats by humans can make it more difficult for them to communicate with both us and each other, according to one study.

“Cats are basically being bred only for their external beauty, so the effect on cognitive abilities is not yet known,” Takagi told Salon.