The flexible, thin-film device has the potential to make any surface into a low-power, high-quality audio source.

MIT researchers have developed an ultrathin loudspeaker that can turn any rigid surface into a high-quality, active audio source. The straightforward fabrication process they introduced can enable the thin-film devices to be produced at scale.

MIT engineers have developed a paper-thin loudspeaker that can turn any surface into an active audio source.

This thin-film loudspeaker produces sound with minimal distortion while using a fraction of the energy required by a traditional loudspeaker. The hand-sized loudspeaker the team demonstrated, which weighs about as much as a dime, can generate high-quality sound no matter what surface the film is bonded to.

To achieve these properties, the researchers pioneered a deceptively simple fabrication technique, which requires only three basic steps and can be scaled up to produce ultrathin loudspeakers large enough to cover the inside of an automobile or to wallpaper a room.

Used this way, the thin-film loudspeaker could provide active noise cancellation in clamorous environments, such as an airplane cockpit, by generating sound of the same amplitude but opposite phase; the two sounds cancel each other out. The flexible device could also be used for immersive entertainment, perhaps by providing three-dimensional audio in a theater or theme park ride. And because it is lightweight and requires such a small amount of power to operate, the device is well-suited for applications on smart devices where battery life is limited.

“It feels remarkable to take what looks like a slender sheet of paper, attach two clips to it, plug it into the headphone port of your computer, and start hearing sounds emanating from it. It can be used anywhere. One just needs a smidgeon of electrical power to run it,” says Vladimir Bulović, the Fariborz Maseeh Chair in Emerging Technology, leader of the Organic and Nanostructured Electronics Laboratory (ONE Lab), director of MIT.nano, and senior author of the paper.

Bulović wrote the paper with lead author Jinchi Han, a ONE Lab postdoc, and co-senior author Jeffrey Lang, the Vitesse Professor of Electrical Engineering. The research is published today in IEEE Transactions of Industrial Electronics.

A typical loudspeaker found in headphones or an audio system uses electric current inputs that pass through a coil of wire that generates a magnetic field, which moves a speaker membrane, that moves the air above it, that makes the sound we hear. By contrast, the new loudspeaker simplifies the speaker design by using a thin film of a shaped piezoelectric material that moves when voltage is applied over it, which moves the air above it and generates sound.

Most thin-film loudspeakers are designed to be freestanding because the film must bend freely to produce sound. Mounting these loudspeakers onto a surface would impede the vibration and hamper their ability to generate sound.

To overcome this problem, the MIT team rethought the design of a thin-film loudspeaker. Rather than having the entire material vibrate, their design relies on tiny domes on a thin layer of piezoelectric material which each vibrate individually. These domes, each only a few hair-widths across, are surrounded by spacer layers on the top and bottom of the film that protect them from the mounting surface while still enabling them to vibrate freely. The same spacer layers protect the domes from abrasion and impact during day-to-day handling, enhancing the loudspeaker’s durability.

To build the loudspeaker, the researchers used a laser to cut tiny holes into a thin sheet of PET, which is a type of lightweight plastic. They laminated the underside of that perforated PET layer with a very thin film (as thin as 8 microns) of piezoelectric material, called PVDF. Then they applied vacuum above the bonded sheets and a heat source, at 80 degrees Celsius, underneath them.

Because the PVDF layer is so thin, the pressure difference created by the vacuum and heat source caused it to bulge. The PVDF can’t force its way through the PET layer, so tiny domes protrude in areas where they aren’t blocked by PET. These protrusions self-align with the holes in the PET layer. The researchers then laminate the other side of the PVDF with another PET layer to act as a spacer between the domes and the bonding surface.

“This is a very simple, straightforward process. It would allow us to produce these loudspeakers in a high-throughput fashion if we integrate it with a roll-to-roll process in the future. That means it could be fabricated in large amounts, like wallpaper to cover walls, cars, or aircraft interiors,” Han says. 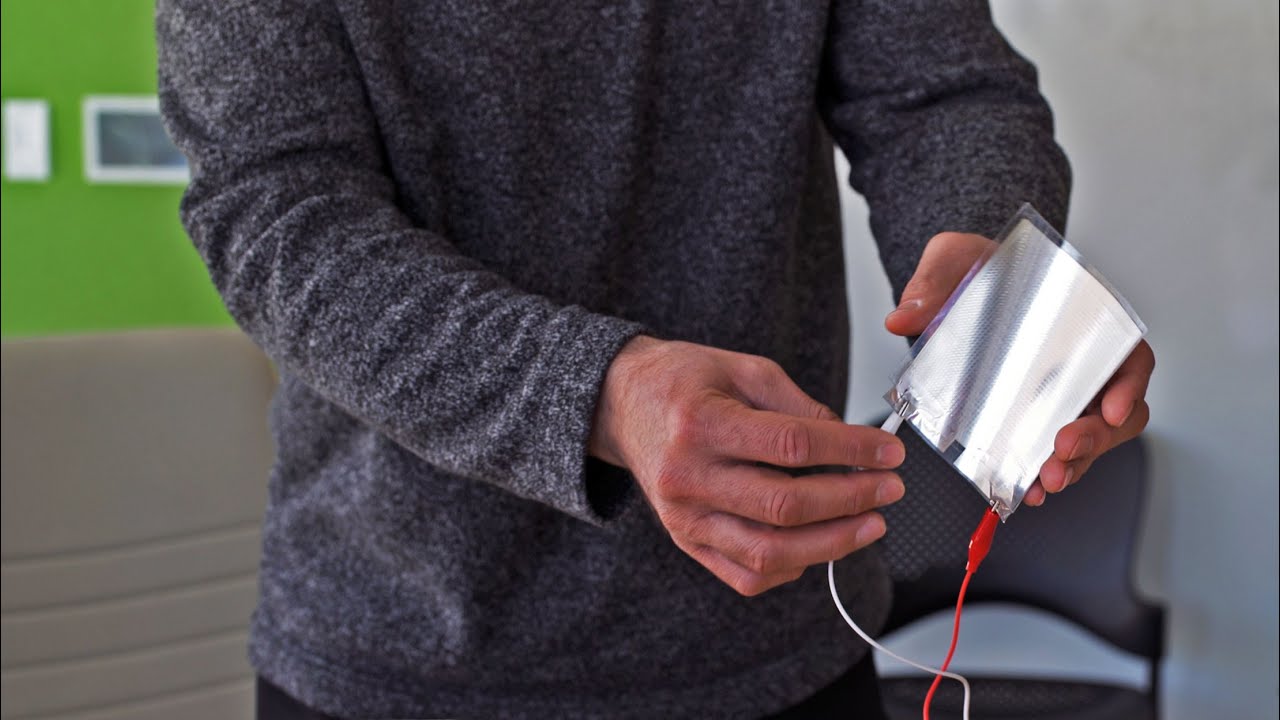 The domes are 15 microns in height, about one-sixth the thickness of a human hair, and they only move up and down about half a micron when they vibrate. Each dome is a single sound-generation unit, so it takes thousands of these tiny domes vibrating together to produce audible sound.

Once the researchers perfected the fabrication technique, they tested several different dome sizes and piezoelectric layer thicknesses to arrive at an optimal combination.

They tested their thin-film loudspeaker by mounting it to a wall 30 centimeters from a microphone to measure the sound pressure level, recorded in decibels. When 25 volts of electricity were passed through the device at 1 kilohertz (a rate of 1,000 cycles per second), the speaker produced high-quality sound at conversational levels of 66 decibels. At 10 kilohertz, the sound pressure level increased to 86 decibels, about the same volume level as city traffic.

The energy-efficient device only requires about 100 milliwatts of power per square meter of speaker area. By contrast, an average home speaker might consume more than 1 watt of power to generate similar sound pressure at a comparable distance.

Because the tiny domes are vibrating, rather than the entire film, the loudspeaker has a high enough resonance frequency that it can be used effectively for ultrasound applications, like imaging, Han explains. Ultrasound imaging uses very high frequency sound waves to produce images, and higher frequencies yield better image resolution.

The device could also use ultrasound to detect where a human is standing in a room, just like bats do using echolocation, and then shape the sound waves to follow the person as they move, Bulović says. If the vibrating domes of the thin film are covered with a reflective surface, they could be used to create patterns of light for future display technologies. If immersed in a liquid, the vibrating membranes could provide a novel method of stirring chemicals, enabling chemical processing techniques that could use less energy than large batch processing methods.

“We have the ability to precisely generate mechanical motion of air by activating a physical surface that is scalable. The options of how to use this technology are limitless,” Bulović says.

“I think this is a very creative approach to making this class of ultra-thin speakers,” says Ioannis (John) Kymissis, Kenneth Brayer Professor of Electrical Engineering and Chair of the Department of Electrical Engineering at Columbia University, who was not involved with this research. “The strategy of doming the film stack using photolithographically patterned templates is quite unique and likely to lead to a range of new applications in speakers and microphones.”

This work is funded, in part, by the research grant from the Ford Motor Company and a gift from Lendlease, Inc.