Towering figures made from miles of wire stretch along the Channel Gardens every year at Rockefeller Center. They are winged, robed, and haloed, each holding a 6-foot-long trumpet that heralds the holiday season. Much like the world-famous Rockefeller Center Christmas Tree, these 12 angels, created by the artist Valerie Clarebout in 1955, are an annual presence at Christmastime. 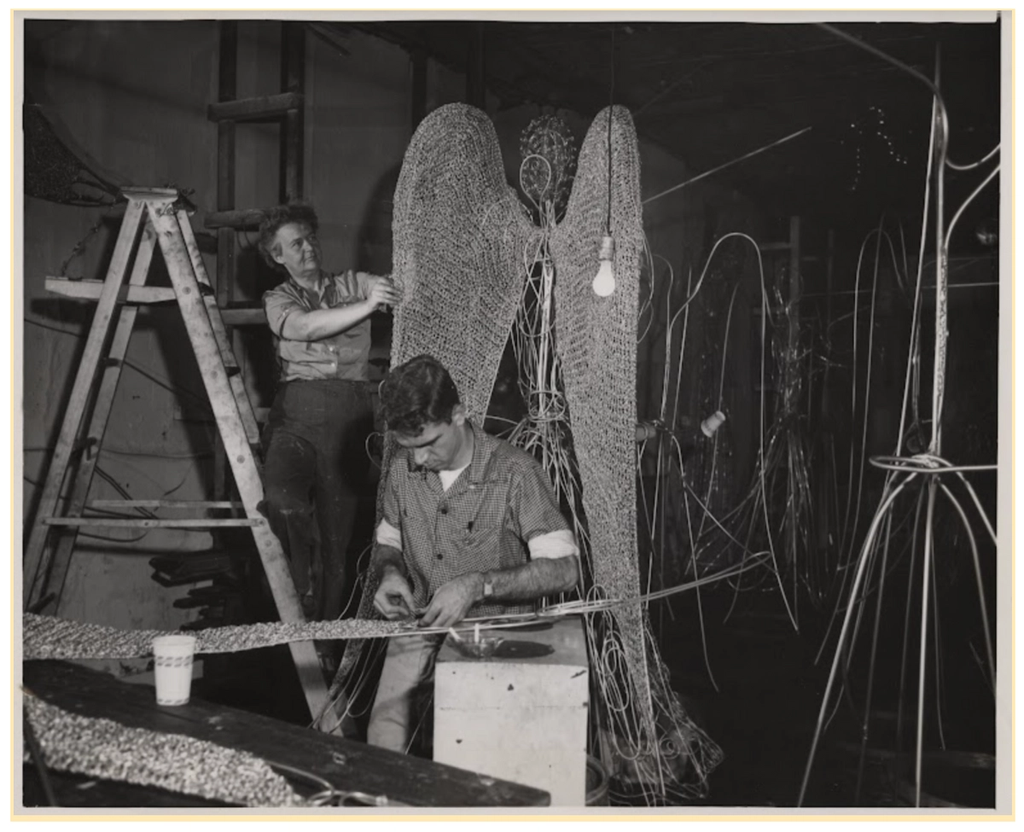 Circa 1954-56; from the Rockefeller Center Archives

It took 75 pounds of wire to build each 8-foot-tall winged figure. The angels are arranged to face one another along the Channel Gardens, the fountains turned off, serenading passersby on the way to Center Plaza. In total, Clarebout used 76 miles of material, including 18 miles of aluminum wire and brass, and thousands of miniature lights to complete the celestial display.

While there is plenty of world-class art to be seen in and around Rockefeller Center, Clarebout’s sculptures are unique in their semi-permanence. “She’s the only artist whose work is regularly installed and removed for a period of time,” explains Christine Roussel, archivist at the Rockefeller Center Archive — where she’s responsible for all the photographs and documents between 1930 and 1996, the year Tishman Speyer acquired Rockefeller Center. Even more unusual, says Roussel, is Clarebout’s continued involvement with the project over the years: “She came back year after year to work on them.”

Born in the early 1900s, Clarebout studied at the Royal Academy of Art in London and Julien Studio in Paris before moving to the U.S. in 1952. Robert Carson, Rockefeller Center’s architect, soon hired the inventive sculptor to design angels for the Plaza. She went on to produce other collections that included jacks-in-the-box, 9-foot-tall snowmen, 12 elegant reindeer, and even one project comprised of 72 animals and four 8-foot-tall trees. She eventually made the angels we see today, working out of her New Fairfield, Connecticut, studio.

A year before passing away in 1982, Clarebout spoke to the New York Times about the angels, saying: “I love them. I love this time of year. Since I was a child I had a tremendous feeling for Christmas quite apart from a religious holiday. I used to lie on the ground and I thought I could feel the earth being reborn. That’s how I always thought of Christmas—as the rebirth of the earth. And now, of course, every year I think of it as bringing the angels back to life.” 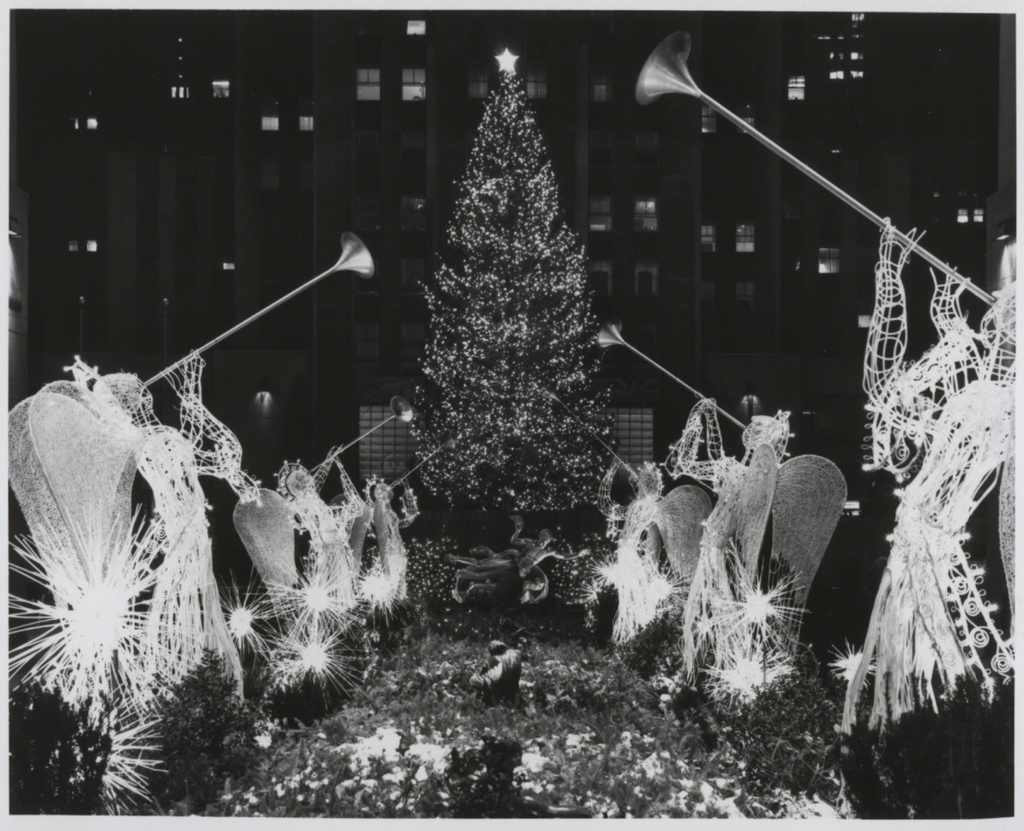 Circa 1954-56; from the Rockefeller Center Archives

In addition to her love of the Christmas season, Clarebout’s work and artistic style had a variety of other influences. She was an adventurer and traveled extensively to Mexico, South America, and Africa. Through her travels, she learned about practices in places around the globe and developed an interest in local crafts. Her mother was also a dressmaker, and can perhaps be credited with Clarebout’s fascination with embroidery. With the angels, in particular, she incorporated crafting techniques as a part of her process. “The angels’ wings, for instance, have this very thin wire mesh which she considered embroidery,” says Roussel.

Another source of inspiration, notes Roussel, was the song “All Things Bright and Beautiful” by Cecil Frances Alexander. The Anglican hymn, first published in Alexander’s 1848 book Hymns for Little Children, alludes to elements of the natural world. Clarebout’s interest in the natural world, which she also touches on in her comment to the New York Times, can be seen in her choice of material. While she used her signature wire to sculpt the angels and accompanying snowflakes, Clarebout chose, in this case, to paint the metal white, creating an illusion of birch or tree twigs that twist upward.

When the angels aren’t on display during the holiday season, they are stored in a climate-controlled warehouse. It takes the Rockefeller Center crew around 10 total hours to install and remove the angels and their bases each year, with each angel weighing 50 pounds. While Clarebout continued to care for them herself during her lifetime, they are now maintained and wrapped each year by decorators. 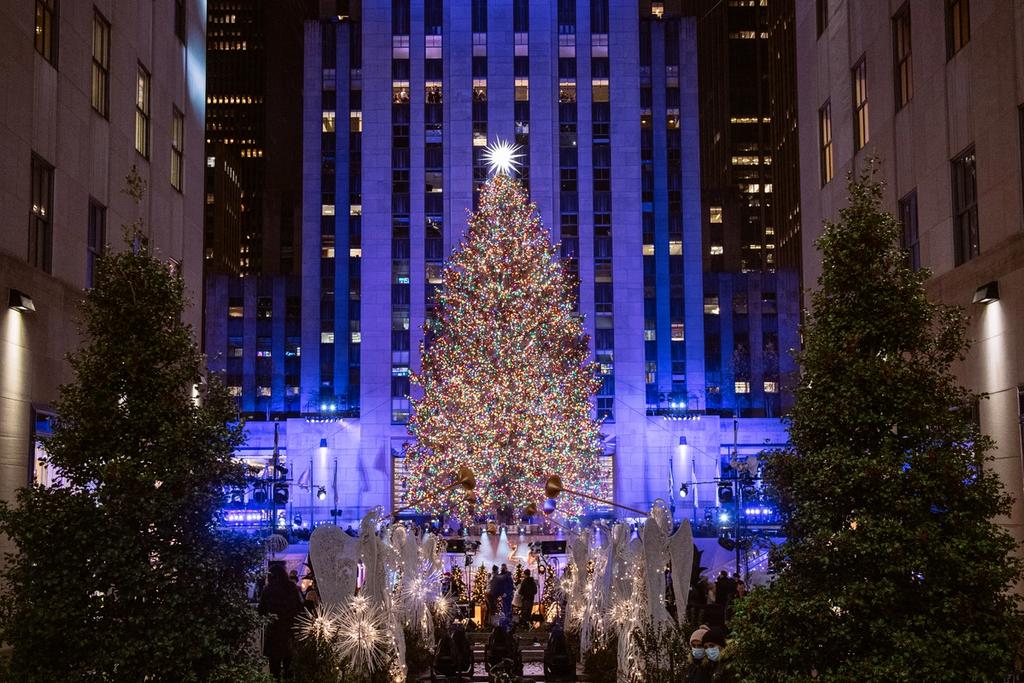