Older Americans Stockpiled a Record $35 Trillion. The Time Has Come to Give It Away.

Transfers to heirs and others are unleashing a torrent of economic activity, including buying homes, starting businesses and giving to charity

The greatest wealth transfer in modern history has begun.

Baby boomers and older Americans have spent decades accumulating an enormous stockpile of money. At the end of this year’s first quarter, Americans age 70 and above had a net worth of nearly $35 trillion, according to Federal Reserve data. That amounts to 27% of all U.S. wealth, up from 20% three decades ago. Their wealth is equal to 157% of U.S. gross domestic product, more than double the proportion 30 years ago, federal data show.

Now they have started parceling it out to their heirs and others, unleashing a torrent of economic activity including buying homes, starting businesses and giving to charity. And many recipients are guided by different priorities and politics than their givers.

Older generations will hand down some $70 trillion between 2018 and 2042, according to research and consulting firm Cerulli Associates. Roughly $61 trillion will go to heirs—increasingly millennials and Generation Xers—with the balance going to philanthropy. The transfer will provide another display of the outsize economic power of baby boomers, who came of age during a wave of post-World War II prosperity and drove the economy through many stages of their lives.

Older Americans have accumulated a record amount of wealth, and are projected to hand down some $70 trillion by 2042. 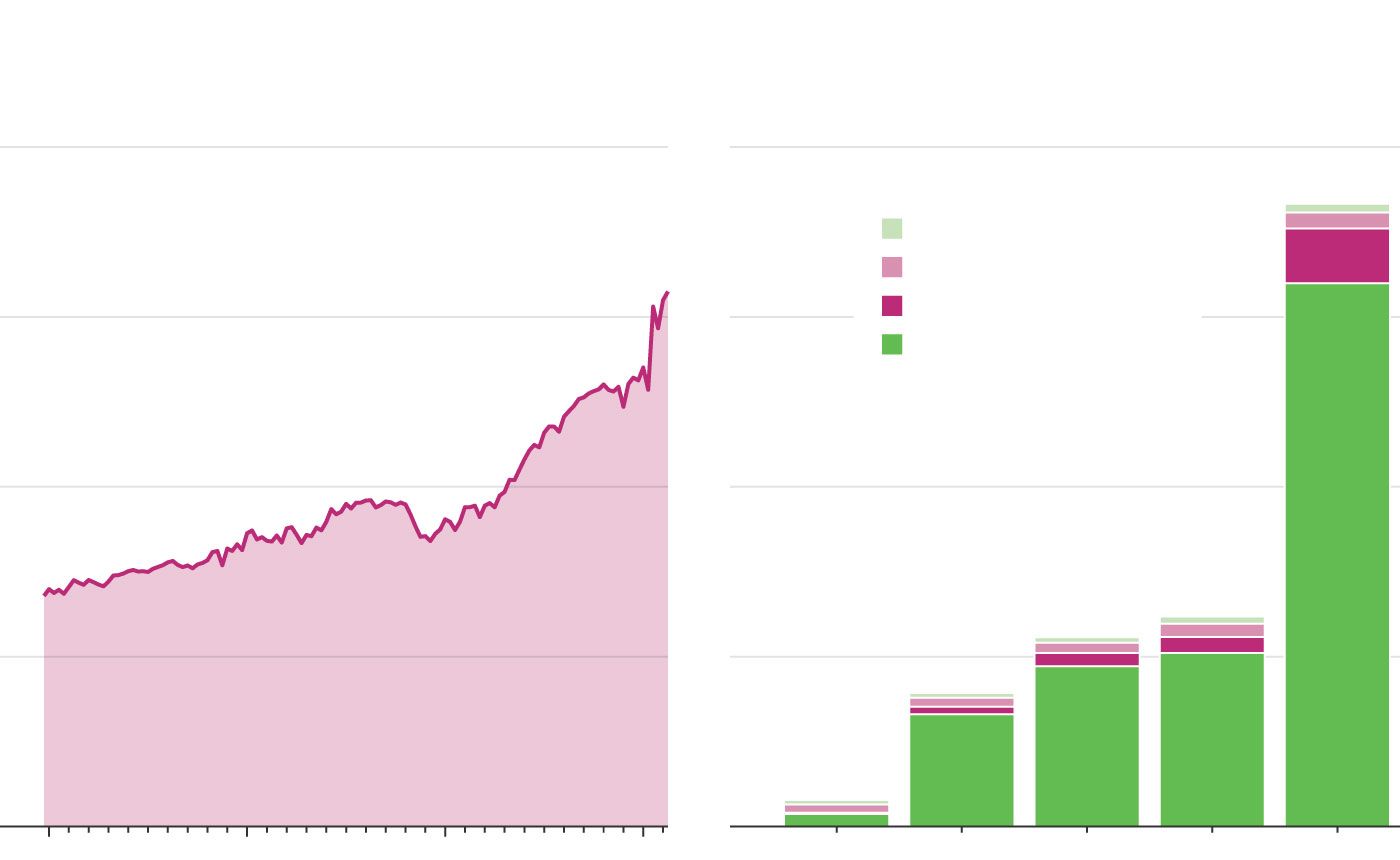 Net worth of people 70 and older as a share of U.S. gross domestic product

*Figures in 2018 dollars. Totals represent the transfer for the five-year increment indicated (not cumulative).

And people aren’t waiting until they die. Annual gifts taxpayers reported to the Internal Revenue Service—a fraction of the gifts that flow outside the tax system—rose to $75 billion in 2016, from an inflation-adjusted $45 billion in 2010. Over that period, the amount that people could give away without paying taxes on gifts rose from $1 million to more than $5 million for individuals, and from $2 million to more than $10 million for couples.

Kingston, N.Y., which sits along the Hudson River north of New York City, is seeing the effect of the approximately $9 trillion expected to flow into philanthropy. When Berkshire Hathaway Inc. Chief Executive Warren Buffett, who is 90, decided to give away nearly all his money, he directed big chunks of it to foundations run by his three children. Peter Buffett, his youngest son, is a musician who lives in the area.

Peter and his wife founded the NoVo Foundation. Through the foundation, they purchased $13 million worth of farmland and used it to create a local agricultural hub. They helped fund a festival in town where artists can exchange their work for free health care. They bought an old Honda dealership and are donating it as a home for the local food cooperative. They helped turn a local radio station, Radio Kingston, into a community-focused nonprofit that broadcasts ad free. https://tpc.googlesyndication.com/safeframe/1-0-38/html/container.html

Inheritances and gifts can bring financial stability to some recipients, and for others can provide the freedom to take more risk—something data have shown drives a greater willingness to invest in stocks, and an increase in riskier work ventures, such as starting a business, that have the potential for bigger payoffs.

Twenty years ago, Bart Boyer, 73, gave each of his four children stock in the financial advisory firm he founded in Asheville, N.C. Today, those shares in privately held Parsec Financial are worth 15 times as much. Each year, he gives them a bit more stock. “All that is outside my estate,” said Mr. Boyer.

Recently, Mr. Boyer and his wife Elaine set up trusts for their five grandchildren with gifts of $25,000 each, an amount they plan to give annually for at least a decade.

Travis Boyer, who was 16 when he first received shares from his father and now is a financial adviser at the firm, said he and his wife recently used income from his shares to qualify for a jumbo mortgage.

He and his twin sister, Tracy Clark, say they have been able to consistently maximize annual contributions to their retirement accounts, even when working in entry-level jobs after college. Ms. Clark, head of marketing at Parsec, received two master’s degrees debt free.

“We told our children that we are going to give them a head start in life, but if they are not productive they won’t be happy,” said Bart Boyer.

Gifts reported to the IRS are likely dwarfed by a growing pool of money that flows under the IRS’s radar, said John Sabelhaus, an economist at the Brookings Institution and former researcher at the Fed. That includes payments from parents and grandparents to help adult children with such things as tuition, car purchases, rent and down payments on homes.

Americans in their 20s are generally the biggest beneficiaries of such gifts, according to Mr. Sabelhaus.

Real-estate agents say more young home buyers in recent years have been getting help from their parents with down payments and other costs. The percentage of first-time buyers younger than 35 with a mortgage cosigner 55 or older rose to 3.2% in 2018, from 1.3% in 1994, according to mortgage-finance company Freddie Mac.

The pending wealth transfers have caught the attention of the Biden administration, which recently proposed reducing a $40 billion annual tax break that has been the cornerstone of estate planning for generations of Americans. Today, people who inherit assets that have risen in value, such as stock held outside retirement accounts, a family home or a three-generation manufacturing company, don’t pay capital-gains taxes unless they sell. If they sell, they can exclude gains that occurred during the prior owner’s lifetime.

Under the Biden proposal, the owner’s unrealized gains would become taxable in the year of his or her death, although each person would receive a $1 million exemption, plus $250,000 more for residences. The proposal would also raise the top long-term capital-gains tax rate from 23.8% to 43.4%.

The plan is likely to get scaled back as it moves through Congress, partly because of the potential impact on family-owned businesses. Some lawmakers say the changes could force families to sell farms and other businesses to pay the tax bill.

At no time in modern history has so much wealth been in the hands of older people. The fortunes of America’s older generations were enlarged by a booming post-World War II economy, declining tax rates on high-income households and rising real estate and stock markets. At the same time, the decline of the nation’s pension system and a decade of low interest rates left many people uncomfortable spending their savings, worried that their retirement nest egg could run out too early, said Matt Fellowes, head of Capital One Investing, an online advisory unit of Capital One.

Given the amount of money at stake for many families, it isn’t surprising that sticky situations abound involving the competing priorities of parents, children, grandchildren, former spouses and others. New York’s state court system reports that proceedings involving contested estates—a category that includes everything from objections to executor fees to litigation—rose to about 3,500 in 2019, from 1,005 in 2016. They declined in 2020 amid pandemic-related court closures.

“It’s important to me to keep everyone communicating well,” said Lee J. Brodsky, who runs a commercial real-estate firm that also manages his family’s wealth. “Part of my job, a lot of the reason I am on this Earth, is to be that person.”

Mr. Brodsky’s father, Bert, a 78-year-old healthcare and home-care entrepreneur, sold most of his businesses years ago, but he kept the real estate attached to them. Father and son decided to fold those assets into a venture called BEB Capital, which Lee Brodsky joined full time in 2017.

The younger Mr. Brodsky, who always saw himself as the mediator in the family, now has to manage the differing views of his parents, his three siblings and their families. This is especially difficult when it comes to risk tolerance for the real-estate investments that serve as their nest eggs.

In 2019, the firm decided to distribute some profits to each family member. That allowed each to make his or her own choices with the money. They invested it mostly through the firm by extending their own real-estate loans to other businesses, but some favored riskier loans than others, Lee Brodsky said.

It arrived at a fortuitous time, she said. She was finishing her bachelor’s degree and had about $32,000 of student debt, $15,000 of credit-card debt and an $8,000 car loan. Wiping that out gave her a fresh start and encouraged her to get a master’s degree in social work. At the time, she was entering a relationship with her now-husband, and she felt fortunate not to be bringing debt into it.

Although she didn’t grow up thinking much about personal finance, she now has an account with Wealthfront Corp., a Palo Alto, Calif., company that invests some of her paycheck into a portfolio of low-cost funds.

“My dad and I had a tumultuous relationship,” she said. “It meant a lot to me knowing this was him taking care of me.”

Warren Buffett’s son Peter said he directly inherited $10 million that his mother left each of her children when she died in 2004. His father, who is worth roughly $100 billion, according to Forbes, has said he would give nearly all his wealth to philanthropy before or at his death. Last week, Warren Buffett gave an additional $4.1 billion to five charities, including Peter’s NoVo Foundation, and resigned from the board of the Bill & Melinda Gates Foundation.

All told, Peter Buffett has received more than $1 billion of his father’s Berkshire Hathaway fortune to give away as he sees fit. Mr. Buffett’s other son, Howard, oversees a farm in Illinois and runs a foundation focused on food security, among other causes. His daughter, Susan, lives in Nebraska and runs a foundation that focuses on childhood education, particularly in the Omaha, Neb., area.

Peter Buffett talks openly about capitalism’s flaws and champions the rights of workers and small-town giving. He professes great respect for his father’s work and says that his life path has been modeled on his father’s success doing work that makes him happy. He said his childhood in Omaha had “a radical disposition around the edges.”

Peter Buffett said his father tells him he disagrees with some of his views about capitalism but respects his opinion. Warren Buffett said he isn’t in favor of “unrestrained capitalism,” and that “we’re on the same page on the important things.”

The NoVo foundation has worked on causes involving indigenous people and violence against women. Over the last few years, it increased its work in Kingston.

Recently, Peter Buffett’s focus has turned to affordability. Kingston has some of the fastest-rising home prices in the U.S., according to the National Association of Realtors. He has been working with the Kingston City Land Bank, a nonprofit that rehabs and sells distressed houses, to increase first-time homeownership.

Mr. Buffett said that as his work in town has deepened, some locals have expressed concerns about his intentions. So he has tried to be more open about what he is doing, and his view that a revived Kingston could be a model for a kinder version of capitalism.

“I saw a lot of Anytown U.S.A. here,” he said. “It was not some precious bedroom community of New York. Kingston, as I got to know it, I was like, ‘Oh my God, this is a little town in Ohio.’ ”

—Heather Gillers contributed to this article.