Altho this is not a new situation and I’m shocked the writer was shocked, the likelihood of Supreme Court review of these searches is new. 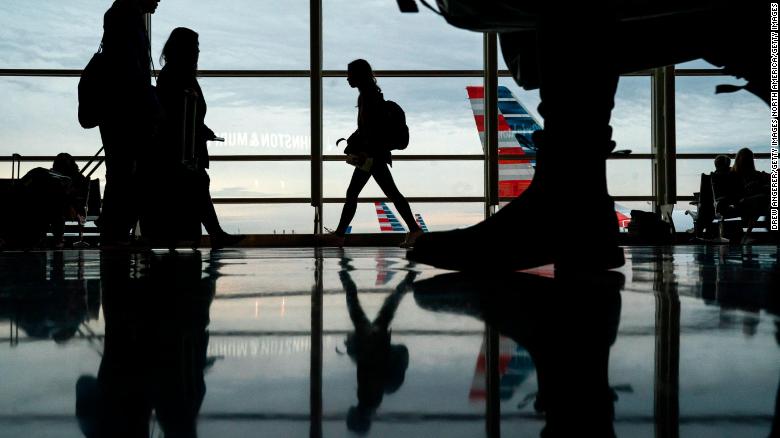 The ACLU and a non-profit dedicated to digital privacy, the Electronic Frontier Foundation, are asking the Supreme Court to hear their case about warrantless electronic device searches at the US border.

Diane Maye Zorri is an assistant professor of homeland security and global conflict studies and a former Air Force captain who spent a decade serving the US armed forces. The views expressed in this commentary are her own. View more opinion on CNN.

(CNN)When I arrived at Miami International Airport after a vacation in Europe in 2017, a Customs and Border Protection (CBP) officer approached me and said he had been waiting for me. I didn’t know what was going on, and neither did my husband, who was waiting for me and wondering why I wasn’t coming out with the other passengers on my flight. The officer escorted me to a private room that reminded me of a police station — small and bare, with no TV, nothing on the walls, empty but for a single officer sitting at a desk. Without explanation, the officers seized my phone and laptop and demanded I unlock them, then took the devices out of my sight for searching while I was interrogated in another room. They could have easily found the answers to their questions with a Google search. All I could do was wonder and worry. Was I in trouble? Did I have the same name as somebody else? It was terrifying. Two hours later, they returned my phone.

To this day, I still don’t know why border officers singled me out, or what they did with the information they obtained searching my phone and laptop. I am a university professor and a former Air Force captain who spent two years serving in Iraq. My devices contain multitudes of private information about my past and present work, as well as personal information about my family that does not belong in CBP’s hands. I was afraid the border officers would read my emails and texts, look at my photos, download my data and contact lists, and share everything with other government agencies. I felt humiliated and violated.

Later, I learned that my fears were not unfounded. Border officers, including agents of ICE and CBP, have the ability to record the contents of a traveler’s computer and laptop and forward it to other government agencies. They may see — and keep — everything they find. Officers subject tens of thousands of travelers to these searches every year, and the number of searches keeps increasing.

Then I learned I could fight back. I was connected with the American Civil Liberties Union (ACLU) and a non-profit dedicated to digital privacy, the Electronic Frontier Foundation. Together with a group of other travelers who’d had similar experiences at the border, we sued the Department of Homeland Security in September 2017. A federal district court ruled in our favor in 2019, holding that border agencies’ policies on electronic device searches violate the Fourth Amendment, and that border officers must have reasonable suspicion that a traveler’s device contains digital contraband before searching it. But this year, the First Circuit Court of Appeals reversed this decision, holding that the government’s policies permitting warrantless and suspicionless searches do not violate the Constitution. According to the court, “The policies each allow border agents to perform ‘basic’ searches of electronic devices without reasonable suspicion and ‘advanced’ searches only with reasonable suspicion … we conclude that the challenged border search policies … are within permissible constitutional grounds.”

Now we are asking the Supreme Court to review our case. The court has the opportunity to make sure what happened to me and other travelers doesn’t keep happening, and that border officers can’t rummage through travelers’ personal lives without a warrant or at least a good reason to believe their devices contain illegal content. According to a 2019 statement from the CBP, the agency asserts that the “ability to lawfully inspect electronic devices crossing the border is integral to keeping America safe in an increasingly digital world.” But throughout the months of discovery in my lawsuit, the government failed to provide any evidence that warrantless, suspicionless searches of people’s phones and laptops actually advance the goal of keeping the US safe. This is not surprising given that most digital information is transmitted into the US via the internet, not carried on people’s devices. Because the way that these searches are conducted violates travelers’ privacy without any evidence that they actually advance the government’s interests, they violate the Constitution.

I hope the case opens Americans’ eyes to what really goes on at our airports and other ports of entry at the border and sparks necessary discussion about privacy rights in the digital age. I will continue to relive my ordeal and debate these questions every day. As a professor of homeland security, I not only tell my students about what happened to me but incorporate it into our lesson plans. Most of my students are straight out of high school, so it’s interesting to see their faces when I ask them to think critically about whether such searches should be allowed. Some assume good intentions on the part of the government, while others don’t. But one thing I think we can all agree on is that our privacy is an important right that we should not lose simply because we travel abroad. I have come to realize how much I value privacy. I’m willing to fight for this constitutional right. Liberty and security are both intrinsic American values. We shouldn’t have to compromise one to achieve the other.