(CNN)The Atlantic hurricane season doesn’t officially begin for another 12 days, but the early signs are it may end up being yet another very busy one.The National Oceanic and Atmospheric Administration (NOAA) issued it’s seasonal Atlantic hurricane forecast Thursday afternoon.The forecast calls for 13-20 total named storms, 6-10 hurricanes, and 3-5 major hurricanes (Category 3 or higher). All of those categories are above the average of 14 total named storms, seven hurricanes, and three major hurricanes.

The Atlantic hurricane season runs from June 1 to November 30 and NOAA is just one of more than a dozen academic institutions, government agencies and private forecasting companies that put out seasonal projections.

“Seasonal forecasts from nearly all universities and private agencies are predicting that 2021 will be an above-average season once again,” CNN meteorologist Taylor Ward said.

Another highly respected forecaster is Colorado State University, which was the first entity to issue a seasonal tropical forecast. Experts there issued their forecast back on April 8 indicating 17 total named storms, eight of which are expected to be hurricanes.

“There aren’t any big outliers this year, while the (European model) was pretty low last year,” said Phil Klotzbach, a research scientist at CSU.

Klotzbach noted that the strong consensus between seasonal forecast groups is likely due to the shared observation of features that usually trigger a very active season.

Reasons behind the predictions

There is considerable warmth across much of the Atlantic, where the ocean’s surface temperature is 1 to 3 degrees Celsius (1.8 to 5.4 degrees Fahrenheit) above normal for May.That’s important because sea surface temperatures are one of the ingredients needed to fuel hurricanes — so it makes sense that there would be a correlation between those temperatures and an active season. 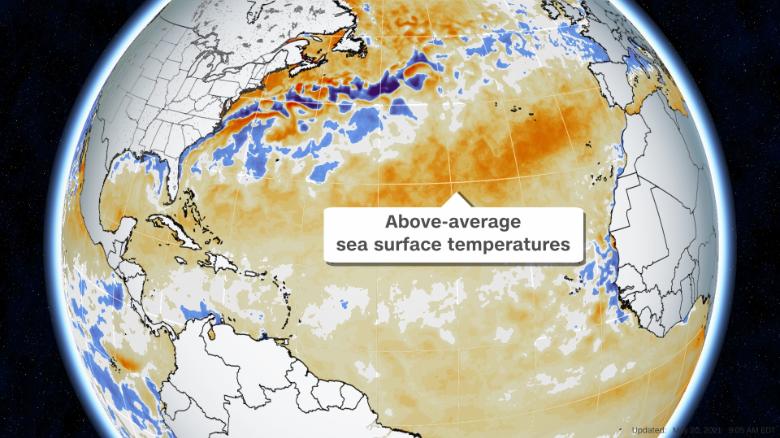 Sea surface temperatures: Blue areas indicate cooler than normal temperatures. Yellow-Orange areas indicates warmer than normal temperatures.Another big factor is El Niño, or a lack thereof. When El Niño is present, it reduces Atlantic hurricane activity due to increased vertical wind shear — changes in wind speed and direction that prevent hurricanes from forming.”The primary reasons why we’re going above average is the low likelihood of a significant El Niño event and the relative warmth in the tropical (Atlantic) but especially the subtropical eastern Atlantic,” said Klotzbach.The Climate Prediction Center has announced that La Niña has officially ended. This is important because La Niña and its counterpart El Niño have significant impacts on tropical seasons in both the Atlantic and Pacific basins.According to the CPC, there is a less than 10% chance of having El Niño conditions at any point for the remainder of this year. That’s not what you want to hear regarding the Atlantic basin.El Niño is typically preferred for the Atlantic basin, as it helps to inhibit tropical development and enhancement. Having neutral conditions, or La Niña conditions, means that there is no real widespread influence to help restrict tropical development.

Early start to the season

At least one named tropical system has formed in the Atlantic prior to June 1 — the official start of the season — every year for the past 6 years. This year could become the seventh year in a row.The National Hurricane Center is monitoring a developing weather system currently several hundred miles east of Bermuda. It’s expected to strengthen and become more organized in the coming days. If it does strengthen into a tropical storm, the first name on the list in the Atlantic basin is Ana.The eastern Pacific basin also got off to an early start. Nearly two weeks ago, Tropical Storm Andres was named after it formed over 600 miles south of Baja California.Andres became the record earliest tropical storm to ever form during the satellite era in the eastern Pacific, surpassing Adrian in 2017 which formed on May 10.As for the rest of the season, NOAA has also forecast for the eastern Pacific basin to be quite active with a forecast 12-18 total named storms, 5-10 hurricanes, and 2-5 major hurricanes.

If a storm forms early, it’s not necessarily cause for worry. A pre-season storm doesn’t always mean the season will be busy. In fact, in the Atlantic basin back in 2015, Ana became the first named storm of the season on May 7, but the whole season ended slightly below average with 11 total named storms. However, in 2020, the first storm, Arthur, was named on May 16, two weeks prior to the start of the season, which was relentless and went on to be the busiest hurricane season in modern history.Climatologically, about 30% of all Atlantic hurricanes make US landfall. However, you don’t need to have all of the forecast storms make landfall in the US for it to be an impactful season.”It doesn’t matter if there’s 30 storms or one … if it impacts you, it’s a busy season,” said Ken Graham, director of the National Hurricane Center.