These Are the Most Popular Thanksgiving Sides in Every State

Is your state more of a mashed potatoes or stuffing kind of place?

Thanksgiving is coming and, like most things this year, this holiday probably won’t look like it has in previous years. You may still gather to eat and argue about politics with your family, and we might even have election results by then, but the circle will probably be tighter. Sorry, weird aunts, uncles, and cousins everywhere. You’re on your own. One thing is for sure, though: foods like turkey, mashed potatoes, macaroni and cheese, and stuffing will be served.

There are some foods you can count on finding on the Thanksgiving table year after year. Turkey, for example, is always the star of the show, but some of us come exclusively for the sides. Stuffing, mashed potatoes, vegetables, and other dishes are typically served up somewhere between turkey and pie, but some sides are more popular in different places than others, according to a new report from careers site, Zippia, which reveals the most popular Thanksgiving side dishes in every state.

New Yorkers, per the study, look forward to stuffing at the Thanksgiving table. Meanwhile, over in California, mashed potatoes are the ruler of all sides. You would think most people are eating the same things at Thanksgiving, but it turns out our tables and the things we look forward to the most differ depending on the state we live or celebrate in.

Mashed potatoes are a favorite in 10 of 50 states across the country. Coming in at a close second is mac & cheese, topping the charts in seven different states. Most states favor carb-heavy sides, but in Maine, side salad reigns supreme. Choices, folks.

These are the most popular Thanksgiving sides by state plus the District of Columbia, according to Zippia:https://bfe9c7fc79ce4f94ebb09de1d08a1ae0.safeframe.googlesyndication.com/safeframe/1-0-37/html/container.html 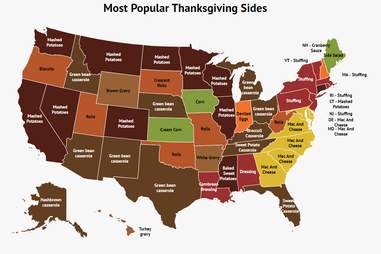 Zippia said these findings are the result of analyzing troves of Google Trends data to identify the “Thanksgiving side each state eats a disproportionate amount of.”

We realize this is going to be a point of contention among the states, and probably even folks who live in the same one. What better way to bring people together than bickering about the best Thanksgiving sides online?