This is a great choice for distracting yourself this weekend. Altho this absorbing import from BBC2 was added to Netflix in January, it’s just beginning to be noticed. I recommend this wholeheartedly for plot, acting, venue. Not arty but won’t let you go.

‘Giri/Haji’ Is Your Next Binge-Watching Obsession

This Netflix import about Japanese gangsters, British cops and two warring brothers slipped on to the streaming service months ago—and it’s the perfect time to catch up with it

Let’s say you are sitting down on your couch to watch TV — a common occurrence, now more than ever! — and are having trouble deciding what, exactly, you’re looking for in regards to an evening’s entertainment. You’re thinking you’d like something with action, maybe some tough-guy posturing and a bit of stoic bloodshedding. A pulpy crime flick. No, wait, maybe something a little meatier than just bang-bang-pow, possibly a family drama. Actually, scratch that, how about a Law and Order-type of thing? One with an English accent, preferably.

The good news: There is an option that can give you those shows. Not just one of them — all of them, in a single fell swoop. And it’s been sitting right there, under our noses, for months.

Airing in the U.K. in late 2019 and slinking on to Netflix at the end of this past January, Giri/Haji is, to put it mildly, a one-stop-shopping array of genres. It appears at a glance to be a modest little offering, one that fits nicely into both the foreign-language imports and the concise British cop serials that the streaming service slots in for folks needing something besides endless Friends and Office rewatches. (Befitting the narrative’s cross-cultural exchange, it’s a mix of roughly 65-percent subtitled Japanese and 35-percent English dialogue.) At its core, the show revolves around two brothers — Kenzo, (Takehiro Hira) a dedicated police detective, and Yuto (Yôsuke Kubozuka), an enforcer for a Tokyo yakuza family — and uses a standard Cain-and-Abel storyline as its starting point. Were it nothing more than that, you’d still be left with a familiar, deftly told drama that showcases two rich, highly nuanced performances. Imagine a flawlessly translated cover version of Bruce Springsteen’s “Highway Patrolman” spun into a serialized streaming saga.

But over the course of Giri/Haji‘s eight hour-long episodes, here’s a partial list of what else you get: a Japanese gangster flick, a London law-enforcement precinct procedural, a shomin-geki family melodrama, an all-female road-trip movie in miniature, a tale of a drug addict’s downward spiral, a gay teen’s coming-of-age/coming-out story, a ghost story and a love story. There are several romantic couplings, in fact. What about colorful, well-dressed cockney underworld kingpins? Of course. Sex? A little. Violence? Most definitely. Animation, modern dance and ex-Mac pitchman Justin Long? We’re not saying “no.”

What we’ve just described sounds like a number of great tastes that you wouldn’t necessarily think taste great together. (You’ve got your chocolate in my peanut butter…along with your corn flakes, tuna rolls, chicken pot pies and THC gummies!) The fact that writer/creator Joe Barton somehow melds all of it together in a manner that not only feels cohesive but close to completely natural feels miraculous. This is not an ADD-friendly attempt to stave off potential viewer boredom, or a pandering play to include something for everybody that ends up pleasing no one. This is what it looks like when you let various types of storytelling inform and converse with each other, and the sum of unique parts assembles Voltron-style into a satisfying whole. 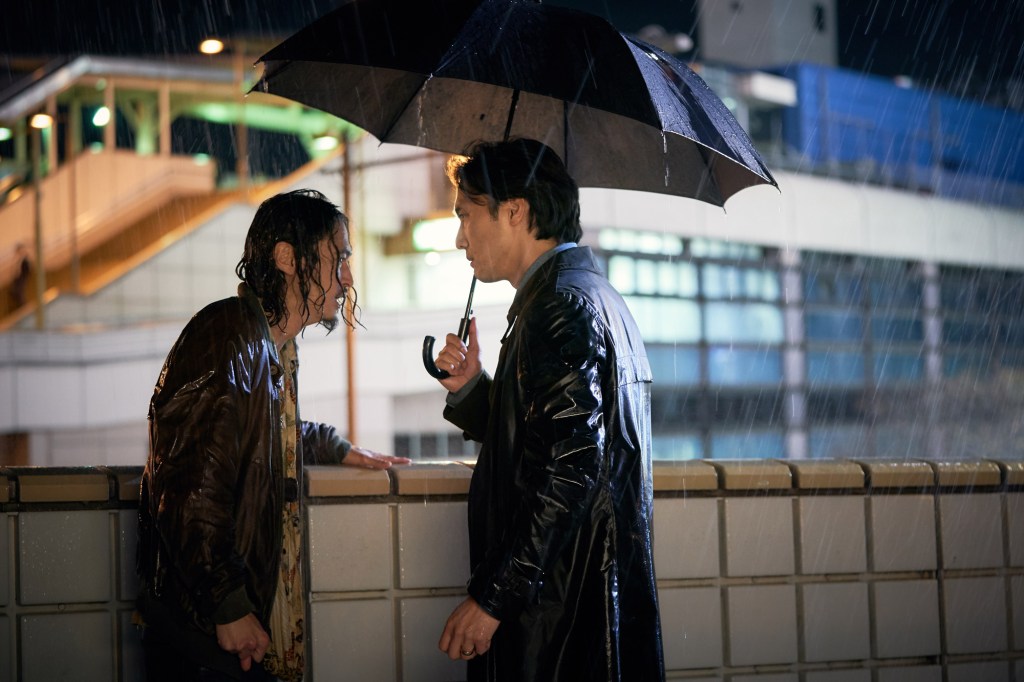 “Someone threw a stone in a pond a long ways away,” one character tells another early on, “and we’re only just feeling the ripples.” Specifically, a Japanese businessman has been found dead in London flat, a small katana sticking out of his back. A few days later in Tokyo, a drive-by shooting at a restaurant turns into a bloodbath. Kenzo is assigned to investigate. He’s also approached by one of the few survivors, a yakuza who may have been the intended target. The two cases are connected, it seems. So, courtesy of the cop’s boss (who’s on the gangster’s payroll, naturally), our man is dispatched to England. The official story is that he’s attending a seminar on “crime-scene management” given by a detective named Sarah Weitzmann (Kelly Macdonald). The reality is that he’s searching for the man everyone thinks is responsible for all of the intercontinental chaos, an ex-hitman hiding out in dear old Blighty who everyone erroneously believed was dead. That would be — you guessed it — Yuto. Some longstanding family business is about to get settled.

Again, a classic brother v. brother rivalry is more than enough grist for a limited series’ narrative mill. But Giri/Haji has a habit of introducing new characters and new avenues to travel down, and often feels compelled to give those detours the deep-dive treatment as well. We start to find out more about Weitzmann’s past, for example, and why she often gets the side-eye at work. We meet Rodney (Will Sharpe), a Soho rentboy who helps Kenzo out on a whim and for a price, then find out he’s battling demons of his own. Kenzo’s daughter, Taki (Aoi Okuyama), is a misfit kid who’s been expelled from school for stabbing a handsy boy in the leg; without giving too much away, she ends up playing a big part as well. Ditto Kenzo’s wife (Yūko Nakamura), his elderly mother (Mitsuko Oka) and a host of tattooed bad guys, morally compromised cops, various lackeys and other players orbiting the both-sides-of-the-law sibling rivalry.

Despite being filled with tangents and B-plot loop-the-loops, Barton has an incredible facility for keeping it all together. Any feeling of being momentarily lost is eventually rewarded with patience. When you start seeing what appears to be standard exposition scenes replayed from different angles an episode down the road, you can sense a steady hand at the tiller offscreen. A throwaway line turns out to have a lot of meaning when it’s repeated in a flashback two episodes later. Someone relegated to the background may step forward unexpectedly. Everything somehow ties in. Every character adds something to the big picture by the end.

And when the show’s two directors — Julian Farino calls the shots on the first four episodes; Ben Chessell helms the back half — do toggle into different areas, Giri/Haji devotes its energy to sticking to the shape and feel of whatever new territory it trods into. The violent, often bloody honor rituals and shoot-out action pieces are brutal battles without honor or humanity that wouldn’t be out of place in a modern yakuza thriller. The first-love segments might have been borrowed from a YA novel; a late-act car trip involving three characters could be its own buddy-dramedy short film. The tone shifts accordingly but not jarringly. Even the outré stylistic flourishes feel like perfectly designed bits of dissonance. A 13-month timeframe is sped through but thoroughly represented in under 10 minutes, while someone being dared to be silent for 20 seconds results in 20 seconds of real-time silence. “Previously on” recaps are rendered in watercolor paintings. There is a jaw-dropping WTF sequence in the final episode that’s as unexpectedly moving as it is totally unexpected, period.

A minor sensation in England, this wonderfully cross-cultural whatsit made the tiniest splash when it got to the U.S. — chalk it up to timing, or the lack of marketing, or the simple fact that the streaming service drops a gajillion things competing for your precious eyeballs at any given moment. Something unclassifiable (and subtitled, no less) is likely to get buried under the programming tsunami. But Barton & co. have thrown a stone from across the pond, and there is no better time then now to feel the ripples of this series. It’s the exact kind of under-the-radar discovery that makes for great obsessive viewing during a time of crisis. Giri/Haji, by the way, translates to “Duty/Shame,” the two factors that everyone in the series have in common. Each character shoulders an obligation, and each character bears the burdens and scars of past dishonors. By the time the final credits start rolling, some roads have tilted toward redemption and some have ended, abruptly or not, without resolutions. Everyone, however, takes that first step because that first word compels them to. And, with a click of a button, you get the privilege of walking right beside all of them.