Am very impressed by the creativity within the performing arts. Obviously this sort of performance isn’t going to raise large sums of cash but they WILL ensure that people remember the joy and satisfaction of listening to fine classical music played well.

Unable to open its concert hall, New York Philharmonic brings its music to the streets 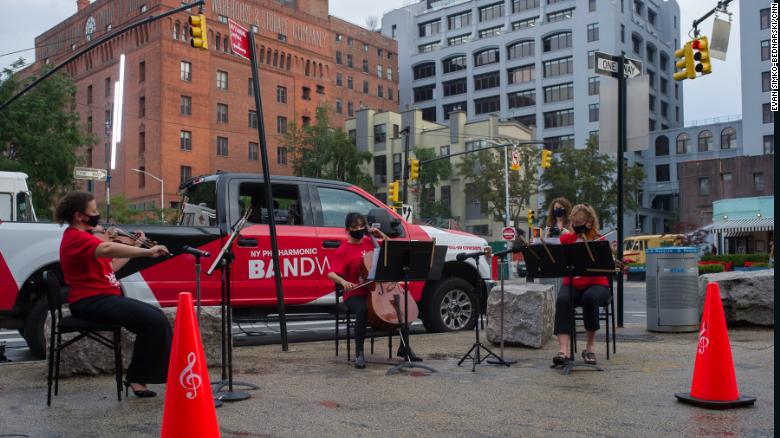 (CNN)The New York Philharmonic was stuck in traffic.It was late afternoon on a Friday, and the red, white and black Ford F-250 pickup truck at the heart of the Philharmonic’s new “pull-up” concert series was traveling at speeds familiar to anyone who has ever tried to cross a few miles worth of Brooklyn during rush hour.It has been more than five months since the New York Philharmonic, the nation’s oldest symphony orchestra, closed the doors to its famous Lincoln Center concert hall in early March, as the coronavirus pandemic started to take hold of the city. In that time, over 23,000 New Yorkers are suspected to have died from Covid-19. Told to close their doors in the spring, many city stores, restaurants and museums remain shuttered.”We like to think of the Philharmonic as New York’s orchestra,” orchestra president Deborah Borda, a violinist, told CNN. “Our musicians, their life is making music. They have been completely cut off from being able to give their gift to people.”Content by CNN UnderscoredLearn a new language for less with these Rosetta Stone dealsRosetta Stone has deals on one-year, two-year and even lifetime subscriptions so you can pick up a new language or two.Borda’s solution, for now, is the rented Ford pickup, which made its debut on Friday. Dubbed the “Bandwagon,” it travels New York’s five boroughs each weekend with a sound system, support staff and a handful of musicians in tow. If the people can’t come to Lincoln Center, Borda figured, bring the music to the people.”It’s a little rough and ready,” she admitted. “That’s just typical New York.”

‘Forget everything and do what we do’

A light but persistent rain raked across the asphalt at Brooklyn Bridge Park, scattering the few dozen New Yorkers who, minutes earlier, had been placing orders at an idling ice cream truck, waiting in line for pizza or otherwise trying to fit in on a summer Friday, face masks in place.The bandwagon arrived unceremoniously and parked under a “No Standing” sign at the corner of the park. A handful of staff began to unload as the rain tapered.Everything was designed to minimize coronavirus risk, Philharmonic spokesman Adam Crane said as he prepared to wipe down a music stand with bleach.The concert locations aren’t announced ahead of time, in an effort to keep crowd size low and social distancing possible. Similarly, the concerts are kept short: 15 minutes at most, to keep large crowds from gathering. Each week’s musicians and staff members are supposed to travel together to limit potential exposure to the virus.”We all get tested,” Crane said. “I got tested Wednesday and today. Wednesday was for today. Today was for tomorrow.”In the wings, three musicians stood under umbrellas, getting ready to play. 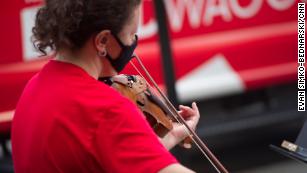 Yulia Ziskel performs in Brooklyn Bridge Park.”This is a way that we can connect with people,” said Cynthia Phelps, the Philharmonic’s principle violist. “It allows us to forget everything and do what we do.””It gives us hope,” violinist Yulia Ziskel said.”We haven’t played together since March,” said cellist Sumire Kudo.The trio had just finished their first pull-up concert, two miles away in the Fort Greene section of the borough. “We started with Beethoven, and did you notice how quiet it got?” Kudo asked Phelps.

‘Remember me but forget my fate’

Once every music stand had been cleaned and the sound system plugged in, the concert began.Anthony Roth Costanzo, acclaimed countertenor with the Metropolitan Opera, hopped into the bed of the pickup with a microphone.”We’re so excited to find you here in Brooklyn Bridge Park!” he shouted with a smile.The trio began a serenade in C major by Hungarian composer Ernst von Dohnányi, the frenetic, almost percussive bowing blending with the exhaust note of a passing sports car. A crowd began to gather.When the song ended and the applause subsided, Costanzo introduced what he called “the saddest aria”– Henry Purcell’s “Dido’s Lament.”From the bed of a rented truck, Costanzo wailed the repeated refrain to a city still mourning its dead: “Remember me but forget my fate. Remember me but forget my fate.””Those are powerful words,” Costanzo said to the audience when the aria ended. “They stick in my head.” 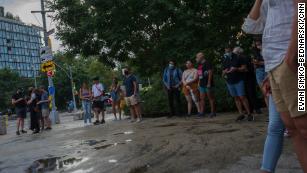 A crowd gathers at Friday’s Philharmonic performance in Brooklyn Bridge Park. Performances are kept short to minimize crowd size and promote social distancing.A crowd of two-dozen had gathered around the truck. Across the street, a gray-haired woman had opened her second-story window and was leaning out for a better view.Next up, another topical piece, the world premiere of a string-trio piece called “Loop,” by American composer Carlos Simon.”He wrote this specifically for this truck,” Costanzo said. “It’s about his experience in quarantine.”

Borda, the Philharmonic president, talks about the bandwagon in terms of civic responsibility. For the fifteen or so minutes that the truck is in any one spot, a volunteer from the League of Women Voters is in the audience registering concertgoers to vote. Costanzo, Borda said, spent time scouting the city by bicycle for locations where the orchestra could reach a more diverse audience than it could from its tony digs in midtown.The truck will make three stops a day every Friday, Saturday and Sunday, and will visit locations in all five boroughs.”This is something we’ll keep doing for a while,” she said.But the future of the Philharmonic remains uncertain. David Geffen Hall, the 2,700-seat Lincoln Center concert hall the orchestra typically calls home, is restricted to 350 guests under the current CDC guidelines, Borda said. “It’s just not practical,” she said.Ticket sales typically cover about half of the orchestra’s expenses, said Borda, and the rest is covered by donors.Musicians’ salaries have been reduced since March, and half of the orchestra’s staff has been laid off, Borda said.”Still, we’re losing millions,” she said. “This is the single most challenging time in the 178-year history of the Philharmonic.”

Back under the Brooklyn Bridge, it was almost time to move on. The orchestra ended on an upbeat note, with George Gershwin’s “I Got Rhythm,” a quintessentially New York tune known from Broadway to the jazz greats of the Harlem Renaissance. 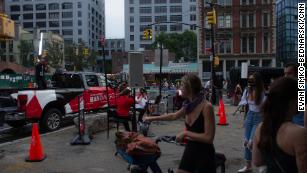 Anthony Roth Costanzo talks to the crowd between songs.The show ended to applause, and the staff began fitting equipment back into the truck.”We respond to our audience,” Costanzo said. “It’s communication. That’s what we missed.”The gray-haired woman in the window gave Costanzo a thumbs-up. He ran across the street to talk with her.Meanwhile, Crane gestured to the truck’s rear wheel-well, where a large, Phillips-head screw was sticking out of the tire.”Day 1,” he shrugged.