The US government on Tuesday filed a civil lawsuit against Edward Snowden, a former CIA employee and National Security Agency (NSA) whistleblower, over the publication this week of his memoir.

Snowden, the suit contends, “published a book entitled Permanent Record in violation of the non-disclosure agreements he signed with both CIA and NSA”. 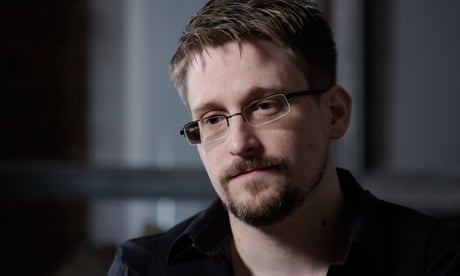 Edward Snowden on 9/11 and why he joined the army: ‘Now, finally, there was a fight’

The lawsuit alleges that Snowden published without submitting the book to the agencies for pre-publication review, “in violation of his express obligations under the agreements he signed”.

Additionally, the suit argues that Snowden has given public speeches on intelligence-related matters, “also in violation of his non-disclosure agreements”.

Although it does not seek to block publication, the suit aims to recover all proceeds earned.

Assistant attorney general Jody Hunt of the justice department’s civil division said in a statement: “Edward Snowden has violated an obligation he undertook to the United States when he signed agreements as part of his employment by the CIA and as an NSA contractor.

“The United States’ ability to protect sensitive national security information depends on employees’ and contractors’ compliance with their non-disclosure agreements, including their pre-publication review obligations.”

In response, Snowden, 36, tweeted a link to his book on Amazon: “The government of the United States has just announced a lawsuit over my memoir, which was just released today worldwide. This is the book the government does not want you to read.”

In 2013, Snowden leaked top secret documents on global surveillance programmes run by American and British spy agencies to media outlets. The Guardian and the Washington Post shared a Pulitzer prize for the story.

At the time, Donald Trump, who had not yet begun a political career in earnest, described Snowden a “traitor” who gave “serious information to China and Russia” and who “should be executed”.

Snowden now lives in Moscow. In an interview with the Guardian to mark the publication of his book, he discussed a life spent communicating with supporters in the US by computer. He said he had detected a softening in public hostility.

“We live in a better, freer and safer world because of the revelations of mass surveillance,” he said.

Snowden also said he was reconciled to life in exile. He married his partner, Lindsay Mills, in a Russian courthouse two years ago.

If the US government gets its way, they might not enjoy the proceeds of his work. In a statement, the eastern district of Virginia said: “The United States’ lawsuit does not seek to stop or restrict the publication or distribution of Permanent Record.

“Rather, under well-established supreme court precedent … the government seeks to recover all proceeds earned by Snowden because of his failure to submit his publication for pre-publication review in violation of his alleged contractual and fiduciary obligations.”

The lawsuit also names as nominal defendants corporate entities involved in publishing Snowden’s book. The US is suing the publisher, Henry Holt, solely to ensure no funds are transferred to Snowden, or at his direction, while the court resolves the claims.

“Intelligence information should protect our nation, not provide personal profit,” said G Zachary Terwilliger, the US attorney for the eastern district of Virginia. “This lawsuit will ensure that Edward Snowden receives no monetary benefits from breaching the trust placed in him.”

The lawsuit is separate from the criminal charges brought against Snowden, whom the government has accused of violating the Espionage Act.

In his Guardian interview, he neither confirmed nor denied a detail from Oliver Stone’s 2016 film Snowden, a dramatisation of his story which showed him, played by Joseph Gordon-Levitt, smuggling secrets on a memory card stuck to a Rubik’s cube.

He also discussed life as an NSA contractor, saying that in 21st century intelligence agencies, “there are no James Bonds”.

Reviewing Snowden’s book, which also contains excerpts from a diary kept by Mills, the Guardian head of investigations, Nick Hopkins, wrote: “His account of the experiences that led him to take momentous decisions, along with the details he gives of his family background, serve as a robust defence against accusations that he is a traitor.

“It also offers a reminder that his disclosures of mass surveillance and bulk collection of personal information are as relevant now as they were in 2013. More so, he argues, given that private companies have become the new data behemoths.”

The government lawsuit was condemned by the American Civil Liberties Union. Ben Wizner, director of its speech, privacy, and technology project and a lawyer for Snowden, said: “This book contains no government secrets that have not been previously published by respected news organisations.

“Had Mr Snowden believed that the government would review his book in good faith, he would have submitted it for review. But the government continues to insist that facts that are known and discussed throughout the world are still somehow classified.”

Jesselyn Radack, a lawyer who represents whistleblowers, drew a parallel with WikiLeaks founder Julian Assange, tweeting: “In both [cases] we’re seeing a toxic new trend of [the justice department] going after PUBLISHERS.”

The government may rest its case on the precedent of Frank Snepp, a former CIA analyst who in 1977 published a book, Decent Interval, about the agency’s role in the Vietnam war.

The government sued him for breach of contract and a federal court imposed a “constructive trust” on proceeds from the book, later reimposed by the supreme court.

Francis Boyle, an international law professor at the University of Illinois College of Law who believes Snowden performed a vital public service, said: “I don’t think he should be penalised for it financially but, regrettably, that’s the Snepp case and now the supreme court is even more rightwing, so I think he will lose his proceeds.”