These aren’t new, but they brought a smile to this Manhattan resident’s face. There’s a reason so many people move here and never leave.

There are a lot of wonderful quotes about New York City, but there are also two things to remember about these quotes:

1. For every lovely thing said about this city, an equally disparaging thing has been said, and very often by the same person.

2. The best ones are from a long, long time ago.

Still, even the oldest ring true today, and they are nice to read when it’s 110 degrees and humid and you are writing out your rent check because the 1st is soon, any day now, and you forgot, and that’s too much money for your glorified dorm room but that’s the price you pay to live in New York City. And you know what? It’s still worth it.

Read the below often and when needed. 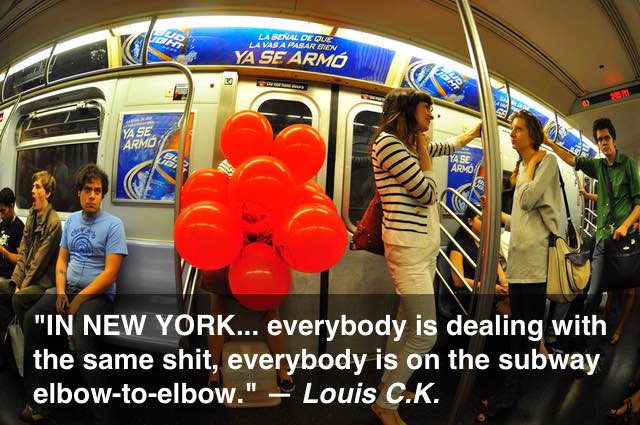 “London is satisfied, Paris is resigned, but New York is always hopeful. Always it believes that something good is about to come off, and it must hurry to meet it.” — Dorothy Parker

“When you leave New York, you are astonished at how clean the rest of the world is. Clean is not enough.” — Fran Lebowitz

“Once you have lived in New York and it has become your home, no place else is good enough.” — John Steinbeck

“Quite simply, I was in love with New York. I do not mean ‘love’ in any colloquial way, I mean that I was in love with the city, the way you love the first person who ever touches you and you never love anyone quite that way again.” — Joan Didion

“In Rome I am weighted down by a lack of momentum, the inertia of a spent civilization. In New York I feel plugged into a strong alternating current of hope and despair.” — Ted Morgan

“My favorite thing about New York is the people, because I think they’re misunderstood. I don’t think people realize how kind New York people are.” — Bill Murray

“In New York, everyone is so mixed together that there’s less of a feeling of class here. Everybody is dealing with the same shit, everybody is on the subway elbow-to-elbow.” — Louis C.K.

“When I’m in New York, I just want to walk down the street and feel this thing, like I’m in a movie.” — Ryan Adams

“Sometimes I feel like my only friend, is the city I live in, is beautiful Brooklyn.” — Mos Def

“That’s my favorite place in the world, so far, that I’ve seen. I haven’t travelled much, but I don’t think I’ll find anything to replace Brooklyn.” — Marilyn Monroe

“If I’d lived in Roman times, I’d have lived in Rome. Where else? Today America is the Roman Empire and New York is Rome itself.” — John Lennon

“I love the city in an emotional, irrational way, like loving your mother or your father even though they’re a drunk or a thief. I’ve loved the city my whole life—to me, it’s like a great woman.” — Woody Allen

“There is something in the New York air that makes sleep useless.” — Simone Beauvoir

“One can’t paint New York as it is, but rather as it is felt.” ― Georgia O’Keeffe

“As for New York City, it is a place apart. There is not its match in any other country in the world.” — Pearl S. Buck

“Whoever is born in New York is ill-equipped to deal with any other city: all other cities seem, at best, a mistake, and, at worst, a fraud. No other city is so spitefully incoherent.” — James Baldwin

“I look out the window and I see the lights and the skyline and the people on the street rushing around looking for action, love, and the world’s greatest chocolate chip cookie, and my heart does a little dance.” — Nora Ephron

“I would give the greatest sunset in the world for one sight of New York’s skyline … What other religion do we need? When I see the city from my window—no, I don’t feel how small I am—but I feel that if a war came to threaten this, I would throw myself into space, over the city, and protect these buildings with my body.” — Ayn Rand

“Everybody ought to have a lower East Side in their life.” — Irving Berlin

“The true New Yorker secretly believes that people living anywhere else have to be, in some sense, kidding.” — John Updike

“I wake up every morning and say to myself, ‘Well, I’m still in New York. Thank you, God.” ― Ed Koch

“Sometimes, from beyond the skyscrapers, the cry of a tugboat finds you in your insomnia, and you remember that this desert of iron and cement is an island.” ― Albert Camus

“The city seen from the Queensboro Bridge is always the city seen for the first time, in its first wild promise of all the mystery and beauty in the world.” — F. Scott Fitzgerald

“New York is the only real city-city.” — Truman Capote

“Living in California adds ten years to a man’s life. And those extra ten years I’d like to spent in New York.” — Harry Ruby

“I go to Paris, I go to London, I go to Rome, and I always say, “There’s no place like New York. It’s the most exciting city in the world now. That’s the way it is. That’s it.” — Robert De Niro

“I believe in New Yorkers. Whether they’ve ever questioned the dream in which they live, I wouldn’t know, because I won’t ever dare ask that question.” — Dylan Thomas

“There is no place like it, no place with an atom of its glory, pride, and exultancy. It lays its hand upon a man’s bowels; he grows drunk with ecstasy; he grows young and full of glory, he feels that he can never die.” — Walt Whitman

“At night… the streets become rhythmical perspectives of glowing dotted lines, reflections hung upon them in the streets as the wistaria hangs its violet racemes on its trellis. The buildings are shimmering verticality, a gossamer veil, a festive scene-prop hanging there against the black sky to dazzle, entertain, amaze.” — Frank Lloyd Wright