Discount Me In: How I Saw 30 Shows on a Student Budget

A summer stage binge reminded one young journalist of the power of great storytelling, and that cheap tickets are out there if you know where to look.

My boss at The New York Times suggested two shows I had to see this summer: “The Ferryman” and “My Fair Lady.”

In 10 weeks as an editing intern, I mainlined more plays, musicals, ballets and cabaret performances than many people see in their entire lives.

In between fine-tuning stories for the White House correspondent Maggie Haberman or the New York Yankees beat writer James Wagner, I spent my nights nestled in Broadway theaters.

I watched an 83-year-old Glenda Jackson unleash the guttural growls of a death metal singer as King Lear. I saw the Hogwarts recruits of “Harry Potter and the Cursed Child” stagger across the stage, wands aloft, as though dragged by a cat skidding across a just-waxed floor.

A day after the death of the original “Phantom of the Opera” director Hal Prince, I witnessed Sierra Boggess deliver a rendition of “Wishing You Were Somehow Here Again” at Feinstein’s/54 Below, a performance so raw that it nearly broke my heart (and hers, it looked like).

For the record, I am not rich. I’m about to start the final year of my master’s degree in English at Indiana University-Purdue University Indianapolis, with a year’s worth of apartment rent and tuition to match. And while my Times internship was paid, I certainly wasn’t making Bill Gates money.

But I never spent more than $70 for a show this summer — with two exceptions, for “Cursed Child” and “Phantom,” my favorite musical. And most of my tickets cost $40 or less.

I lined up at box offices first thing in the morning — a few times after getting home after 1 a.m. from night shifts — for rush tickets, which are steeply discounted seats sold at the theater the morning of a performance. I bought standing-room tickets for “Chicago” and “Come From Away.” I saw all the free shows I could (looking at you, Shakespeare in the Park).

I won four lotteries for discounted (often front-row) seats — but never for “Hamilton,” despite 80 tries.

Two shows were free, thanks to tagging along with the Times theater critics Ben Brantley and Laura Collins-Hughes. I scored cheap student tickets to “My Fair Lady,” “Ink,” “All My Sons” and “Fairview,” and a $12 seat for the American Ballet Theater’s production of “Jane Eyre.” (Thank you Linctix, Manhattan Theater Club, Hiptix, Theater for a New Audience New Deal and the Met Opera Students program.)

For 10 weeks, I made a game out of trying to cram in as many shows as possible while putting The Times first. But theatergoing grew more challenging when I started working nights. Fortunately, I had a theater-loving boss, who even rearranged my final week’s schedule so I could see the “Phantom of the Opera” matinee.

And while I couldn’t afford to see the shows featuring every big-name actor in town, I could meet them at the stage door after a performance. I watched Adam Driver, Kylo Ren-like all in black, bring an entire street to a standstill after “Burn This.” I came this close to getting a “Size XL” sticker on the front of Jeff Daniels’s new T-shirt stuck to the front of my Playbill at “To Kill a Mockingbird.” And my middle-school self’s dreams came true when I took a photo with Corbin Bleu after “Kiss Me, Kate.”

But why? I’m not an aspiring actress. I didn’t do high-school theater. I couldn’t have told you who Audra McDonald was four years ago, much less what she was famous for. To be honest, I’d have been hard-pressed to tell you the difference between a play and a musical.

But a two-month study abroad trip to London in 2016 catapulted me into the world of the West End, and I’ve attended more than 150 shows in Indianapolis, and now New York, in the three years since.

What gripped me then, and now, is the storytelling. As a journalist, my goal is to write immersively; to leave you so absorbed in a story that you forget you’re reading words on a page.

A standout theatrical production accomplishes the same. In the title role of “Dear Evan Hansen,” Andrew Barth Feldman made me forget where I was, who I was, that I was anything other than part of the world onstage — the mark of truly magical theater. I’m pretty sure I didn’t draw breath the entire first act.

A highlight of my Broadway binge was attending “The Black Clown,” a music-theater adaptation of Langston Hughes’s 1931 poem, with Mr. Brantley, The Times’s co-chief theater critic. I watched him take a few, mostly illegible, notes in a miniature composition notebook from Staples, then write a review that read as though he’d had the script in hand and a recording of the production saved in his Netflix library to replay scenes at will.

It was an affirmation penned almost entirely from memory, one that dripped with both passionate appreciation and meticulous detail. I was astounded. 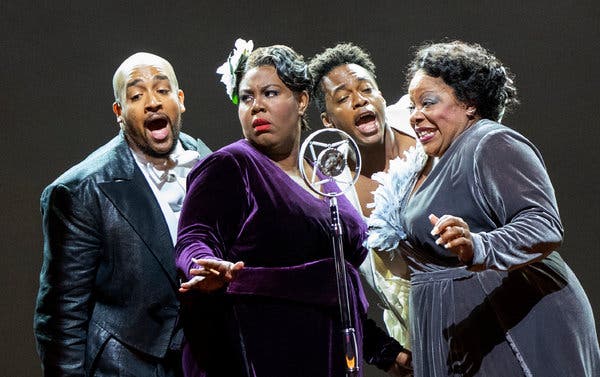 Of course, not every show I saw this summer won me over.

I wasn’t a fan of the Tony darling “The Ferryman.” And I found the unconvincing fight choreography and clichéd plot of “Be More Chill” exasperating, which was especially disappointing given my expectations after listening to George Salazar’s “Michael in the Bathroom” on the cast recording for months.

Going to so many shows in such a short period of time underscored the reality that while the majority of Broadway productions are good and worth seeing, the truly great shows are rare, and the atrocious ones even rarer.

A show may have stellar actors, but a slog of a script, or moving orchestrations paired with cheesy lyrics. The best Broadway shows are a marriage of form and performance, of a tightly coiled plot that unfolds at exactly the right pace and actors who render you unable to view them in any light except the one they embody onstage.

“We think you’re going to be pretty bored when you return to Indy,” my mom texted me at the end of July.

But that’s not to say I don’t need to come back to New York. Jesse Green, The Times’s other chief theater critic, has invited me to attend a show with him when I return. And I still need to see the Rockettes.

Plus I have a “Hamilton” lottery to win. (I have to win eventually, right? Right?)