You can’t make this stuff up. Pumice stone aka cold, solidified lava that’s light enough to float, has collected at the ocean’s surface from an underwater eruption. It’s currently floating toward Australia carrying with it all sorts of marina life hitchhikers. If the pumice raft makes it to Australia’s Great Barrier Reef, some the raft’s riders may drop off and help the more than decimated marine life there. Sounds like a movie.

(CNN)A “raft” of floating pumice rock the size of Manhattan is drifting towards Australia, bringing along with it new marine life that could help with the recovery of the Great Barrier Reef’s corals, half of which have been killed in recent years as a result of climate change.

Experts say that if the pumice makes it to the Great Barrier Reef, it could help replenish some of the lost marine life. The raft is believed to be home to organisms like crabs and corals.
The massive floating sheet of volcanic rock was first spotted by sailors on August 9, days after an underwater volcano is believed to have erupted near the Pacific Island of Tonga, according to NASA Earth Observatory. 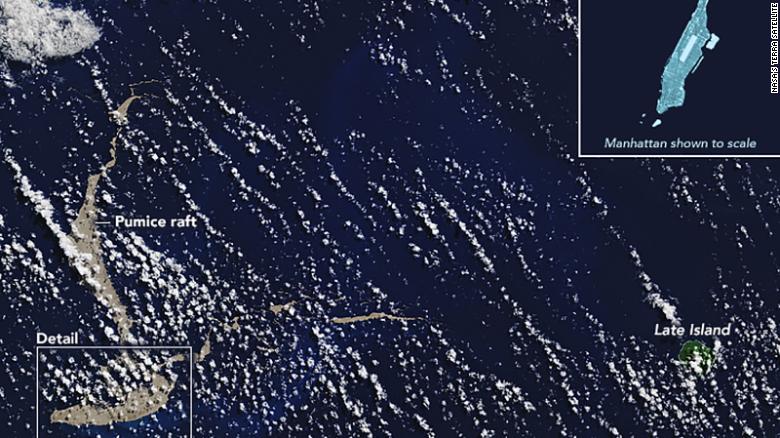 Days later, Australian sailors heading towards Vanuatu on the ROAM catamaran said they encountered volcanic rocks “made up of pumice stones from marble to basketball size such that water was not visible.”
ROAM crew Michael and Larissa Hoult told CNN that they had been at sea for 10 days before coming into contact with the gray floating matter one evening.
“It was quite eerie, actually,” Larissa said. “The whole ocean was matte — we couldn’t see the water reflection of the moon.”
“The rocks were kind of closing in around us, so we couldn’t see our trail or our wake at all. We could just see the edge where it went back to regular water — shiny water — at night,” Michael added, saying they could see the rock from every direction.
“It was a bit of a mystery, we didn’t know how deep it was, if we were sailing over a volcano that was active at that moment. It looked almost like there was more coming up, bubbling up from underneath,” said Larissa.
The pumice, which is filled with holes and cavities, floats like an iceberg does, with about 90% underwater and 10% above water, the pair explained.
That pumice is expected to drift with the current down to the Australian coast over the next seven to 10 months, they said, where scientist believe could have a positive affect on the microorganisms there.
Scott Bryan, a professor at Queensland University of Technology specializing in geology and geochemistry, said the current pumice raft is moving at around 10 to 30 kilometers (six to 19 miles) per day. Its speed and direction is largely a result of surface currents, waves and wind, Bryan said.
Bryan said events like this happen every five years and involve trillions of pieces of pumice as small as a marble and as big as a basketball.
In 2012, research by Bryan and others following a similar underwater volcanic event found that pumice rafts are one way that the ocean can redistribute diverse sea life.
This month’s eruption could have similar positive effects, Bryan said, though there’s also a risk it could introduce invasive species to the region.
When the pumice makes its way to the Great Barrier Reef, the sea life attached will travel too, potentially bringing diverse new colonies of barnacles, corals and more. 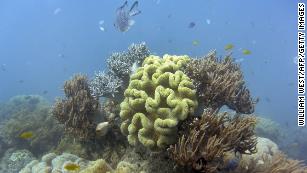 ‘Dead corals don’t make babies’: Great Barrier Reef losing its ability to recover from bleaching
“Each piece of pumice is a vehicle for something to attach and grow and be transported across the ocean,” Bryan told CNN. “We will have millions to billions of individuals of tens of different species all arriving en masse along our coastline, all healthy and potentially finding a new home.”
Bryan said there are challenges in replenishing the coral, as they cannot jump off and find a new habitat as easily as more mobile animals like crabs can.
Generally, Bryan said, corals “need to reach a reproductive age when they can start to spawn and release their larvae in the Great Barrier Reef.”
But if new corals are catching a ride on the pumice stone, they can end up replenishing the reef. “The pumice gets waterlogged or negatively buoyant and sinks to the sea floor and gets logged and stuck there, then those plants and animals and sea life can then continue to grow and grow in this new location,” Bryan said.
In 2016 and 2017, marine heat waves caused by climate change resulted in mass bleaching, which killed about half of the corals on the Great Barrier Reef, along with many others around the world.