I think even the most adventurous of us occasionally likes comfort consumption, just like we like comfort food.

In defense of reading the same book over and over again

Why we revisit old favorites — like Harry Potter — so often.

Harry Potter is the best-selling book series of all time. Even people who haven’t read Harry Potter likely have at least the cursory understanding that it is about a boy wizard. Talking about it online, however, is done at the poster’s own risk.

“Read another book,” demand Twitter users the moment a tweet about the widely beloved fantasy series gains a small amount of attention. “I’m begging you,” they plead. Elsewhere on the internet, it’s the same. There are subreddits and Facebook groups devoted to eradicating the plague of Harry Potter fans, not for liking the books themselves but for committing the sin of not reading enough books.

Like tacos on Tinder profiles or Game of Thrones GIFs, Harry Potter has, in the 20 years since its first publication, become an avatar for basicness that transcends taste: Professing to love Harry Potter online doesn’t just mean that you’re just like everybody else; it also means you’re maybe a neoliberal and call yourself a Slytherin when you are actually just 32.

But Harry Potter is by no means the sole example of a cultural touchstone whose irksomeness is defined by its popularity. At the same time as The Office has dominated Netflix viewership, it’s become a de facto insult to describe a boring person. During the last season of Game of Thrones, a war online seemed to break out between people who argued that liking a popular show wasn’t a personality and those who retorted that disliking a popular show wasn’t a personality either, a natural extension of the exhausting “let people enjoy things” discourse.

Basically, what all these critiques come down to is that with so many books and movies and TV shows in the world, why keep talking about just one?

I’m not advocating for laziness, or rather, I am not advocating exclusively for laziness. Of course people should read another book, and another, and another, so as to open themselves up to new ideas and new stories and perspectives other than their own, because that is an important part of being a person. Still, there is evidence that rereading — and rewatching and relistening and reconsuming all types of culture — might actually be somewhat beneficial, or at the very least comforting.

An Atlantic piece on the subject draws from a 2012 research paper by Cristel Antonia Russell and Sidney Levy called “The Temporal and Focal Dynamics of Volitional Reconsumption: A Phenomenological Investigation of Repeated Hedonic Experiences,” which is a very long way of saying “watching or reading the same thing over and over again” and breaks down the findings into four categories.

The first reason is the simple one: People rewatch The Office because they like The Office. Sometimes they pick up on new details, and the more they watch a show, the more they like it. The second is, to be fair, also pretty simple: Humans are nostalgic creatures, and we like to revisit things from our past. Atlantic writer Derek Thompson references a study that showed subjects who were exposed to popular songs from their youth were more likely to report feeling that they were “loved” and that “life is worth living.” (I am not sure what that says about people who came of age in the era of emo music that was mostly about wanting to die, but no one’s done a study on that yet.)

Important Films To Consider Before Just Rewatching ‘The Office’: http://ow.ly/eK1f50lJBvr 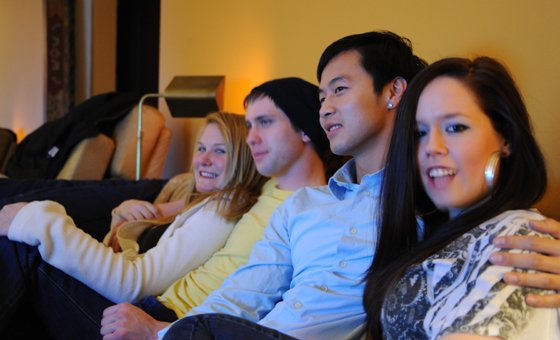 Third, we know how Harry Potter will end, and, more importantly, how that ending will make us feel. Russell and Levy call this “experiential control”: That stability acts as a salve for the increasingly unstable ‘traditional points of social and personal fixity — church, state, family, linear time’ that mark postmodern societies,” they write.

Finally, they posited that there is an existential purpose in reconsumption: By re-engaging with the same object at different times, we can more easily understand our identities, our choices, and how our pasts differ from our present. “In addition to allowing a realization and appreciation that one has changed since a previous experience, the linkage with previous experiences offers continuity across time, as if erasing the time gap between experiences.” One subject compared this feeling to standing on the same street corner in New York City many years apart, describing it as “sort of an odd moment of continuity,” as if they’d never left at all.

And now, a disclosure: I have read every Harry Potter book at least 10 times, but those books are not nearly the extent of my “repeated hedonic experiences,” as Russell and Levy would call them. Since starting to write this piece, I have listened to a single song on loop, repeated for such an extended duration that it is basically the same thing as silence. I am not exaggerating when I say I have seen every episode of 30 Rock dozens of times over. Every night, I fall asleep to similar NBC sitcoms of the mid-2000s, whose jokes I could quote in dreams.

A few years ago, I admitted to my mom that I did this, and she laughed and said it wasn’t anything new. I had done the same thing with VHS tapes of The Lion King and Aladdin as a kid and the song “Baby Beluga” as a toddler. To be fair, that’s just how children are; they crave predictability when so many things are changing. The idea that my habit of constantly reexperiencing certain media was related to some infantile compulsion to self-soothe was not exactly surprising; as a person with both ADHD and an anxiety disorder, a lot of the things I do are in the service of directing my attention to anything but the pinball game constantly careening in my brain.

Ironically, listening to a 12-year-old episode of The Office I’ve seen a hundred times is one of the few ways I can experience any degree of quiet. It is the single period of the day where I can hear or think absolutely nothing, with no expectations of productivity or attentiveness and without ricocheting worries sometimes related to theoretical catastrophic accidents or my chemically forgetful nature but mostly about my own destructive sense of self-worth.

“Read another book” is, in practice, sort of a terrifying prospect. The idea of turning on a new TV show I suspect I might not immediately love or starting a novel by a writer I’m unfamiliar with presents an unpleasant scenario beyond simply the time wasted on a disappointing piece of content. In failing to be sufficiently captivated, I will redirect my attention to anything that will be better at capturing it — the internet, probably, or one of my many split ends that need pulling apart — then feel guilty about my inability to complete anything even remotely challenging, then succumb to whatever spiral happens to be sitting on the other side of boredom. Of course, I do it anyway, because I have to for my job, and because I enjoy new things. It’s just that I also know them to be panic-inducing.

This does not make me unique; plenty of others have written odes to the joys of rewatching and the concept of the comfort binge. That MTV intern who could recite the entirety of Mean Girls in 30 minutes is a reconsumption hero, so are the YouTubers who upload videos like “Trololo Song for 10 Hours.” When both The Office and Friends — the two most popular shows on the platform — were reported to be leaving Netflix in 2021 and 2020, respectively, subscribers had a meltdown over the thought of no longer being able to find their soothing media of choice with just a few clicks.

Though many of us have always had comfort books or comfort shows, “read another book” as a battle cry is not new. Voices in that particular chorus may also be comforted by the fact that people have been arguing for centuries that doing the same thing over again is stupid. In 1882, composer Ferdinand Praeger published a diatribe against repetition in music, writing, “All will readily admit that a first impression, however striking, is weakened when followed by an immediate repetition. Would ever a poet think of repeating half of his poem, a dramatist a whole act, a novelist a whole chapter? Such a proposition would be at once rejected as childish.”

Praeger was talking about repetition while composing, not the practice of, say, listening to a song over and over again. But the sentiment that recurrence serves no other purpose than redundancy remains today, when we make fun of people who know exactly which house they’d belong to in Westeros.

One of the ironies of “read another book” is that Harry Potter was supposed to make us read more. “Of all the magical powers wielded by Harry Potter, perhaps none has cast a stronger spell than his supposed ability to transform the reading habits of young people,” began a New York Times piece in 2007, the month the seventh and final Harry Potter novel came out. It turns out, though, not even magic could force people to read more than they already do: The percentage of kids who read for fun continued to drop as they got older, at pretty much the same rate it did before Harry Potter arrived at Hogwarts. “Read another book” might have come a decade too late.

Of course people should read more books. But sometimes they don’t, and maybe that’s fine. If Harry Potter couldn’t change adult reading habits, nothing can. Might as well read the same book over and over again as you fall asleep, finally, thinking about absolutely nothing, which is really the most magical feeling of all.

Sign up for The Goods’ newsletter. Twice a week, we’ll send you the best Goods stories exploring what we buy, why we buy it, and why it matters.