Knee-jerk decision by Trump will produce economic disaster for one of the most valuable wild salmon fisheries.

(CNN)The Environmental Protection Agency has lifted an Obama-era restriction that had blocked a controversial mining project in Alaska.

The Pebble Mine project, which is slated to be developed near Bristol Bay, Alaska, was blocked by the EPA during the Obama administration because scientists found that the copper and gold mine would devastate the bay’s fish habitat. Bristol Bay includes one of the most valuable wild salmon fisheries in the world.
On Tuesday, the EPA announced that it will reverse that decision, and though the move does not guarantee the mine will be developed, the agency said it will now focus on the permit-review process in coordination with the Army Corps of Engineers. 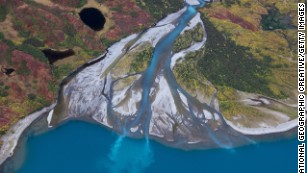 EPA head met with a mining CEO — and then pushed forward a controversial mining project
EPA’s Chris Hladick, an administrator who presides over Alaska, said the “proposed determination” that previously blocked the project “does not account for the full record and does not grapple with differing conclusions” about the mine’s potential environmental impacts.
“The agency has worked closely with the Army Corps to engage with stakeholders and the public on this issue, which has resulted in an expansive public record, including specific information about the proposed mining project that did not exist in 2014,” Hladick said in a statement.
Tom Collier, the CEO of the company behind the proposed mine, Pebble Limited Partnership, praised Tuesday’s development and argued that the Obama administration’s EPA reached its determination by relying on hypothetical mining scenarios not based on the development plan proposed by his company.
“Finally, this administration has reversed the outrageous federal government overreach inflicted on the state of Alaska by the Obama administration,” said Collier, whose company has sought to develop the copper and gold mine for more than a decade.
The EPA found in 2014 that a mine would cause “complete loss of fish habitat due to elimination, dewatering, and fragmentation of streams, wetlands, and other aquatic resources” in some areas of the bay. The agency therefore invoked a provision of the Clean Water Act to protect the bay and halt the mine. 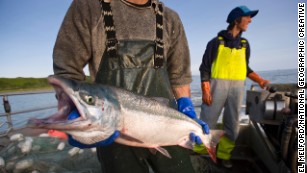 This is the most valuable wild salmon fishery in the world
CNN previously reported that Collier met with then-EPA Administrator Scott Pruitt hours before Pruitt directed his agency to withdraw a plan to protect the watershed of Bristol Bay that stalled the mine. However, in 2018 Pruitt flip-flopped and announced the protections would stay in place as the EPA gathered more information. In June, the agency announced it would resume consideration of the proposal.
The Natural Resources Defense Council, an environmental group, condemned the EPA’s decision announced Tuesday.
“This outrageous move is the Trump administration’s gift to a foreign mining corporation at the expense of Bristol Bay’s fish, aquatic resources and community. Yet again, the agency charged with protecting our public health and environment is abandoning science — and the public — in order to advance the interests of a wealthy few,” said council attorney Joel Reynolds.