Maybe you can at least reduce the air conditioning you need.

I live in a NYC high rise with lots of glass facing south and north. I’ve added ceiling fans to every room but the bathroom, lowered the shades practically to sill level, and run the a/c only when I’m home and only in the room where the cats and I are lounging.

Unfortunately my radiators provide both a/c and heat, depending on the time of year and have a blue to red dial rather than a temperature-specific thermostat. My solution has been to add thoroughly legible, but small, thermometers in key areas of each room.

At this time of year, if I’m not being particularly active, I can manage with a maximum temperature of 80. I drop that to 78 if I’m doing heavy chopping in the kitchen which has the least air circulation in the house. I’m generally not happy with more than a degree or two above that, particularly when trying to sleep.

I may look back to my current arrangement as the lap of luxury in a few years.

A hot room won’t usually kill you, but a hot planet will. If you feel sweaty, just imagine how your grandchildren are going to feel

In New York, where the summer reverberates with the hum of air conditioners, that percentage seems even higher. Along certain avenues, you walk in a sprinkle of condensation dripping from row after row of window units above, never quite sure if you’re supposed to be disgusted. In Queens, where I live, one of my neighbors runs their window unit almost all year long, cooling their apartment in winter against the steam radiator that the landlord keeps on full blast around the clock, and in summer against, well, the summer. The poor unit only gets a couple months of rest a year, in the spring and the fall, though even then the person often runs it in fan mode, probably because the sudden absence of the machine’s roar is so unnerving.

I don’t have an air conditioner, and never have. When I mention this to acquaintances, some flat-out don’t believe me; others seem concerned for my health, begging me to accept old window units they have in their closets. My parents offer to wire me money so I can buy one. I don’t decline their offers out of pride, or stubbornness. It really just doesn’t feel that hot to me. Even when the heat index hit 133 this July, I only noticed because of all the people on social media proclaiming they weren’t going to leave the house that day. I have a thermometer on my living room wall, so I know it doesn’t get that hot, never above 95. I sit at my desk in my boxers, drinking iced tea, occasionally swabbing sweat from my neck and chest. (I will admit that the white T-shirt I use for this has become alarmingly yellowed.) I sleep with a fan on me, on low or medium. I don’t know what to say. It ain’t that bad.

A recent article in the New York Times (for which, full disclosure, I was interviewed, though my quotes didn’t make it in) pointed out something that I’ve often observed anecdotally: that the perception of thermal discomfort is correlated with GDP. In other words, only rich people whine about the heat, crank the a/c, and then go on Twitter to brag about how they’re not setting foot outside. Everyone else just mops the sweat from their brow and gets on with their lives. 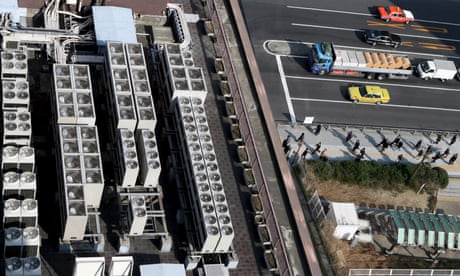 An inversion of nature: how air conditioning created the modern city

Is it my economic bracket, then, that gives me a tolerance for the heat? I’m a writer and, aside from the occasional big year, it’s true I’m wretchedly, comically poor. It’s also true I’ve always lived in crappy old buildings with no central air, where the outlets had that looseness that makes you think a fire will break out if you plug in anything that pulls more juice than a desk lamp. But there’s a natural process at play, too. According to science, your body can actually acclimatize to heat pretty easily. All it takes is one or two weeks of constant sweating and elevated core temperature; your metabolic rate plummets, while your cardiovascular function and sweat rate goes way up, making you a super-efficient ventor of heat.

So it’s not that I’m tough, or stoic – in fact, I’m a huge whiner; ask my girlfriend – it’s just that by the time the heat index hit 133 here in New York, I’d been fully acclimatized by a month and a half of sweating it out.

But if you’re one of the 90% of Americans with air conditioning, and you sleep and live in an artificially cooled environment, not to mention work eight, nine hours a day in an office – they are notoriously chilly – your body never gets to acclimatize. Those few minutes you spend outside, panting from frigid office to frigid home or vice versa, are going to feel hellish, even if it’s only in the 80s. Air conditioning isn’t the solution – it’s the problem.

But then, not all of those 90% of American households with a/c are affluent – not even close. The American insistence on air conditioning comes down to something in the national character, I think. The American aversion to heat is essentially defiant, a conquest of the environment, a refusal to have the temperature dictated to you by the planet. It’s manifest destiny and global imperialism applied to the living room thermostat – the “Don’t Tread On Me” flag, but the snake is in a 64-degree office with windows that don’t open, as the world burns outside.

And the world is burning; June was the hottest month in human history, and air conditioning is undoubtedly a factor in that. Hydrofluorocarbons, the refrigerants used in a/c units, are far more potent greenhouse gases than carbon dioxide or methane, and if we continue along at our current pace, a/c alone will use as much electricity by mid-century as all of China uses today. If that power comes from fossil fuels, a/c alone will account for a half-degree Celsius rise in global temperatures.

The conventional wisdom is that the main obstacle to pulling out of this nosedive, in the US anyway, is that a lot of people just don’t believe the planet is getting warmer. But I don’t think that’s quite true. Trump and the people like him, the ageing boomers in red states who forward their adult children emails about how climate change is caused by sunspots or is a Chinese conspiracy, don’t actually disbelieve in global warming; they just refuse to be inconvenienced, by facts or blame or responsibility, just as they refuse to be inconvenienced by heat or sweat. That’s why logic doesn’t work on them; you’re arguing against an emotional position, not an intellectual one.

The difference is, a hot room won’t usually kill you, but a hot planet will. If you think walking from your office to the subway is sweaty, just imagine how your grandchildren are going to feel in 2060, as they wait in weeks-long lines at the Canadian border, applying for asylum from wildfires and droughts. If we don’t acclimatize voluntarily soon, we’ll be acclimatized eventually by force.