The Capital Weather Gang at the Washington Post does a thorough and accurate job of both short-term and long-time weather forecasting. Worth noting.

NOAA ups the odds of above-average hurricane season: ‘This season could produce quite a bit of activity’

NOAA is forecasting a 45 percent chance of above-normal activity.

“We are now entering the peak months of August through October,” said Gerry Bell, NOAA’s lead hurricane season forecaster. “Historically, 95 percent of hurricanes, and most major hurricanes, occur during this time frame. That’s why we do an update to the outlook. An above-normal season has the highest chance of occurring.”

NOAA is now predicting between 10 and 17 named storms, five to nine of which are expected to become hurricanes. That includes Andrea, a nondescript subtropical storm in May that affected only the fish, and Barry, a low-end Category 1 hurricane that dropped two feet of rain in Louisiana and Mississippi. More important, the revised outlook is calling for two to four major hurricanes, referring to storms that achieve Category 3 status — or greater. 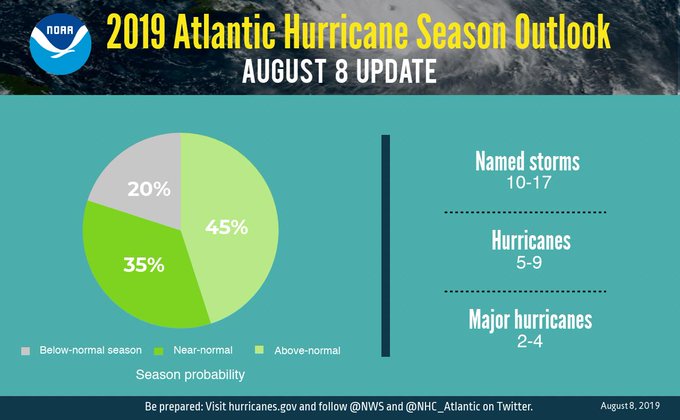 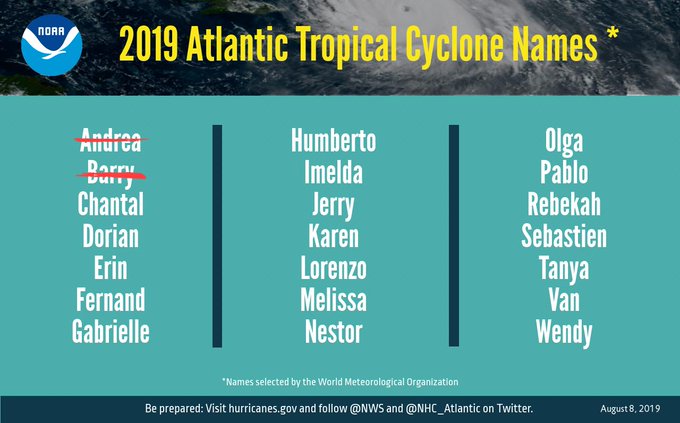 “In addition, the storms we end up getting could be longer-lived and stronger than we had forecast back in May,” said Bell, who referred to the early demise of an El Niño pattern that is typically hostile to hurricanes. “Winds now are forecast to be much more hospitable” to hurricanes.
Earlier Wednesday, NOAA announced that El Niño had dissipated and issued its final El Niño advisory.

Bell emphasized that it’s impossible to predict this far ahead whether these storms will hit land. “That comes down to local weather patterns at the time the storm’s approaching,” he said. That can’t be done before a storm has developed. “We just can’t make seasonal landfall predictions.”

The season may seem to be off to a slow start, but in reality that’s normal. Strong hurricanes rarely form before mid- to late August.

“During June and July, most of the storms we get come from disruptions in the jet stream, or trailing frontal boundaries,” Bell said. “But the pattern switches in August. We start getting storms from tropical waves that come off the coast of Africa. It’s a completely different formation mechanism.” And those are the storms that ride all the way across the Atlantic, gathering strength and, on occasion, metastasizing into monsters.

Go to link for remainder of article.