Europe, very little of it air-conditioned, is facing its second record-breaking heat wave this summer. The detail that has stayed with me is the concept of painting rail tracks white to help them withstand an additional 5 degrees Celsius before buckling. There will be many stopgap measures ahead, but they will not be enough.

These are exactly the patterns predicted more than a decade ago if fossil fuel use were not immediately curtailed virtually to extinction.

(CNN)Europe is sweltering in intense heat, suffering through the latest heat wave in a summer that has seen at least 12 countries experience record-breaking temperatures.

Meteorologists say that Europe is on track for the hottest July on record, following the warmest June since records began in 1880.
Scientists warn that the world should expect more scorching heat waves due to climate change and that current temperature highs are in line with predictions made over a decade ago. 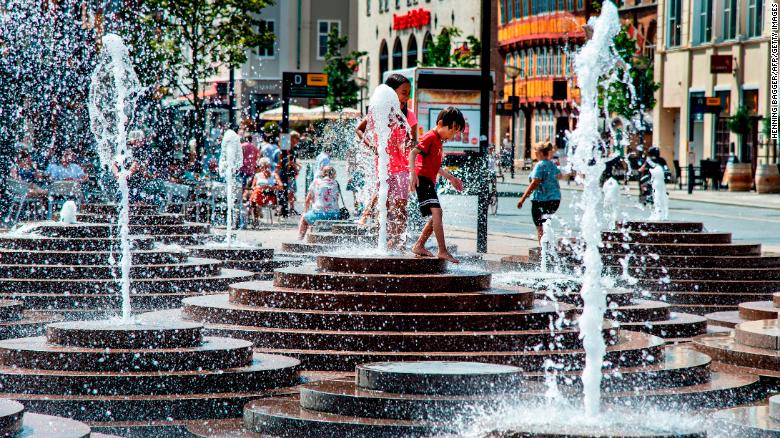 Belgium, Germany, the Netherlands and the UK all reached record-breaking temperatures this week.
On Wednesday, Belgium endured its hottest day ever recorded, with temperatures rising to 39.9 degrees Celsius (102 Fahrenheit). The Netherlands broke a 75-year record on Wednesday, and then hit another all-time high of 40 Celsius (104 Fahrenheit) on Thursday, the national weather forecasting institute said. Temperatures there are still climbing.
In the German town of Geilenkirchen, a temperature high of 40.5 degrees Celsius (104.9 Fahrenheit) was recorded on Wednesday. The UK experienced its hottest ever July day on Thursday, with temperatures predicted to beat the hottest ever recorded temperature of 38.5 Celsius, set in 2003.
All four countries remain on extreme heat alert. 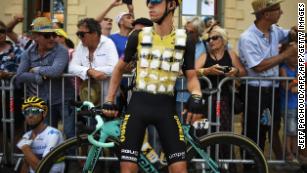 Tour de France riders are strapping on ice vests and guzzling water amid a scorching heat wave
In June, a heat wave broke temperature records in eight countries, including France, the Czech Republic and Switzerland.
France reached a scorching 45.9 degrees Celsius (114.6 Fahrenheit). The country is on high alert again, with temperatures of 42 Celsius (107.6 Fahrenheit) expected in Paris.
The current heat wave presents a serious threat to Notre Dame Cathedral. The roof of Paris’ beloved cathedral, which survived a massive fire months ago, is at risk of collapse, according to chief architect Philippe Villeneuve.
“What I fear is that the joints or the masonry, as they dry, lose their coherence, their cohesion and their structural qualities and that all of sudden, the vault gives way,” he said.

Heat waves such as this one could become the new normal for Europe, driven by rising temperatures caused by greenhouse gas emissions, scientists say. 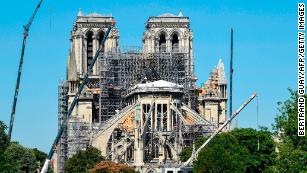 Notre Dame’s architect says the heat wave could cause the cathedral’s ceiling to collapse
“Climate change is without doubt ‘loading the dice’ and making heat waves much more likely and much more severe,” according to Michael Byrne, professor of earth and environmental sciences at the University of St Andrews, in Scotland.
A group of European scientists concluded that the June heat wave was made at least five times more likely because of climate change — and perhaps 100 times more likely.
France’s weather service also made the link, issuing a warning that without serious carbon dioxide reductions, heat waves could become more intense and frequent than in the past.

While temperatures around 100 degrees Fahrenheit might not seem high in comparison to some other parts of the world, they are way above seasonal averages for much of Europe.
Many European cities are not designed to deal with such temperatures. Less than 5% of all European households have been air-conditioned, according to a 2017 report, and public transport can grind to a halt in intense heat. 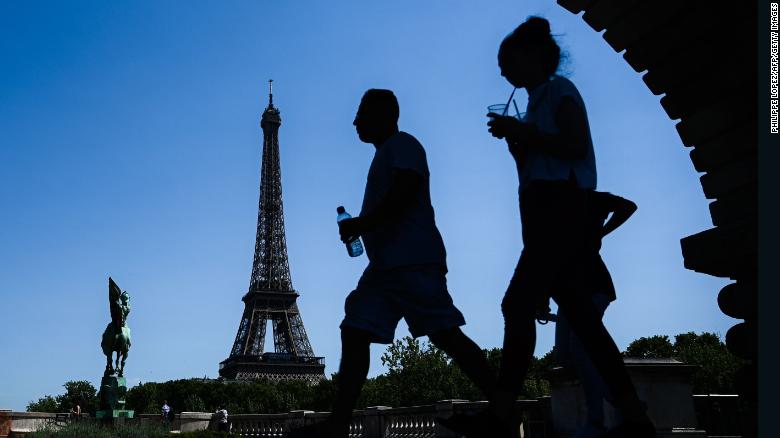 Blue skies behind the Eiffel Tower in Paris on July 23, 2019.
Amid the sweltering heat, trains were canceled in a number of European countries due to risk of derailment.
A Eurostar train traveling from Belgium to London broke down on Wednesday, trapping passengers in 40 degrees Celsius heat, without air conditioning.
Network Rail, which operates the UK’s rail infrastructure, said that track temperatures in and around London were set to exceed 50 Celsius (122 degrees Fahrenheit), almost double the average summer rail temperature in the UK.
Railway tracks expand in heat and are prone to buckling when temperatures rise.
One solution is to paint rail tracks white to reflect the sun’s heat, according to John Easton, a rail expert at the Institution of Engineering and Technology. 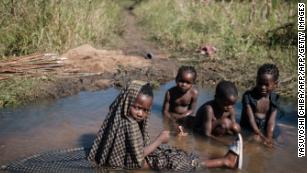 Climate change is seriously threatening human health
“This can reduce the track temperature by 5°C and reduces signaling failures which lead to significant disruption,” he said, adding that Italy uses the technique to lower the risk of buckling.
It is not just public transport that is grinding to a halt because of the heat. In southern France, EDF energy group closed its nuclear power plant as temperatures rose above 40 Celsius (104 Fahrenheit).
“The reason for the cut in output is not because of a technical problem, but an environmental one regarding heating up the river water beyond what is safe for marine life,” according to a spokesperson for the Nuclear Industry Association.

Heat waves pose serious health risks and can cause cardiovascular and respiratory systems to fail, resulting in premature death, Clare Heaviside, of the University of Oxford’s Environmental Change Institute (ECI), told CNN.
Elderly people are most at risk as they are more prone to heatstroke. Experts advise they should keep windows closed and pull blinds down during the hottest part of the day.

European countries must accept the reality of climate change and learn to adapt to extreme weather events, according to Dr Friederike Otto, director of the ECI.
Otto said that France took important mitigation measures after a heat wave in 2003 contributed to tens of thousands of premature deaths. 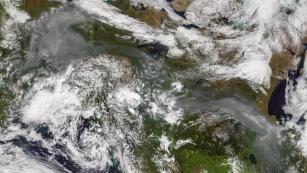 ‘Unprecedented’ wildfires ravage the Arctic
“France made heat plans to better prepare and reduce mortality. These were activated during the June 2019 heat wave and measures including closing schools and setting up helplines reduced the impacts,” he said.
Paolo Ruti, a climate scientist at the World Meteorological Organization (WMO), told CNN that cities could adopt a host of measures to reduce heat impacts, including installing mist spray systems at bus stops and stations, as well as whitening roofs, which would help cool buildings.
It’s not just heat waves, and it’s not just Europe. Countries around the world are experiencing extreme weather catastrophes that threaten to render entire regions unlivable — India is swinging between extreme drought and fatal flooding, 157 million Americans were gripped by a stifling heat wave last week, and the Arctic is facing “unprecedented’ wildfires.