I can’t help wondering whether all the plastic being ingested by marine life in particular (because of how it eats) is displacing space that should be filled by nutritional items. The recent increase in large marine mammals who have died of starvation and also had huge amounts of plastic in their systems makes me think that’s Exactly what’s happening.

Microplastics Have Invaded The Deep Ocean — And The Food Chain 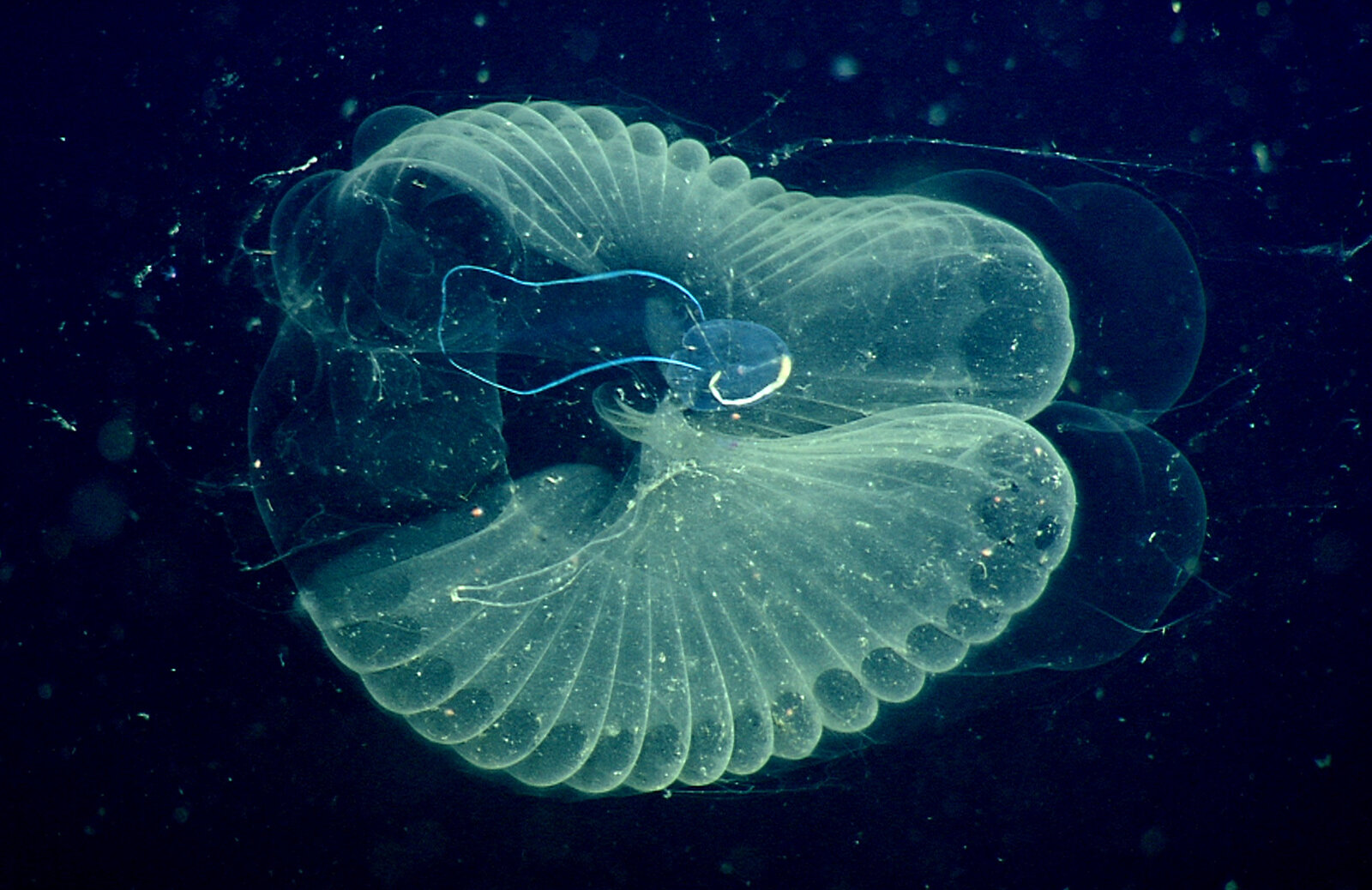 The deep ocean is filled with sea creatures like giant larvaceans. They’re actually the size of tadpoles, but they’re surrounded by a yard-wide bubble of mucus that collects food — and plastic.

Explore more of our reporting on plastic waste in our environment.

The largest habitat for life on Earth is the deep ocean. It’s home to everything from jellyfish to giant bluefin tuna. But the deep ocean is being invaded by tiny pieces of plastic — plastic that people thought was mostly floating at the surface, and in amounts they never imagined.

Very few people have looked for microplastic concentrations at mid- to deep-ocean depths. But there’s a place along the California coast where it’s relatively easy: The edge of the continent takes a steep dive into the deep ocean at Monterey Bay. Whales and white sharks swim these depths just a few miles offshore.

The Monterey Bay Aquarium Research Institute perches on the shoreline. At an MBARI dock, you can see one of their most sophisticated tools for doing that: a multimillion-dollar machine called Ventana sitting on the deck of the research vessel Rachel Carson. “It’s a massive underwater robot,” explains Kyle Van Houtan, chief scientist with the Monterey Bay Aquarium, which collaborates with MBARI. “Robotic arms, a lot of sensors, machinery, lights, video cameras.” 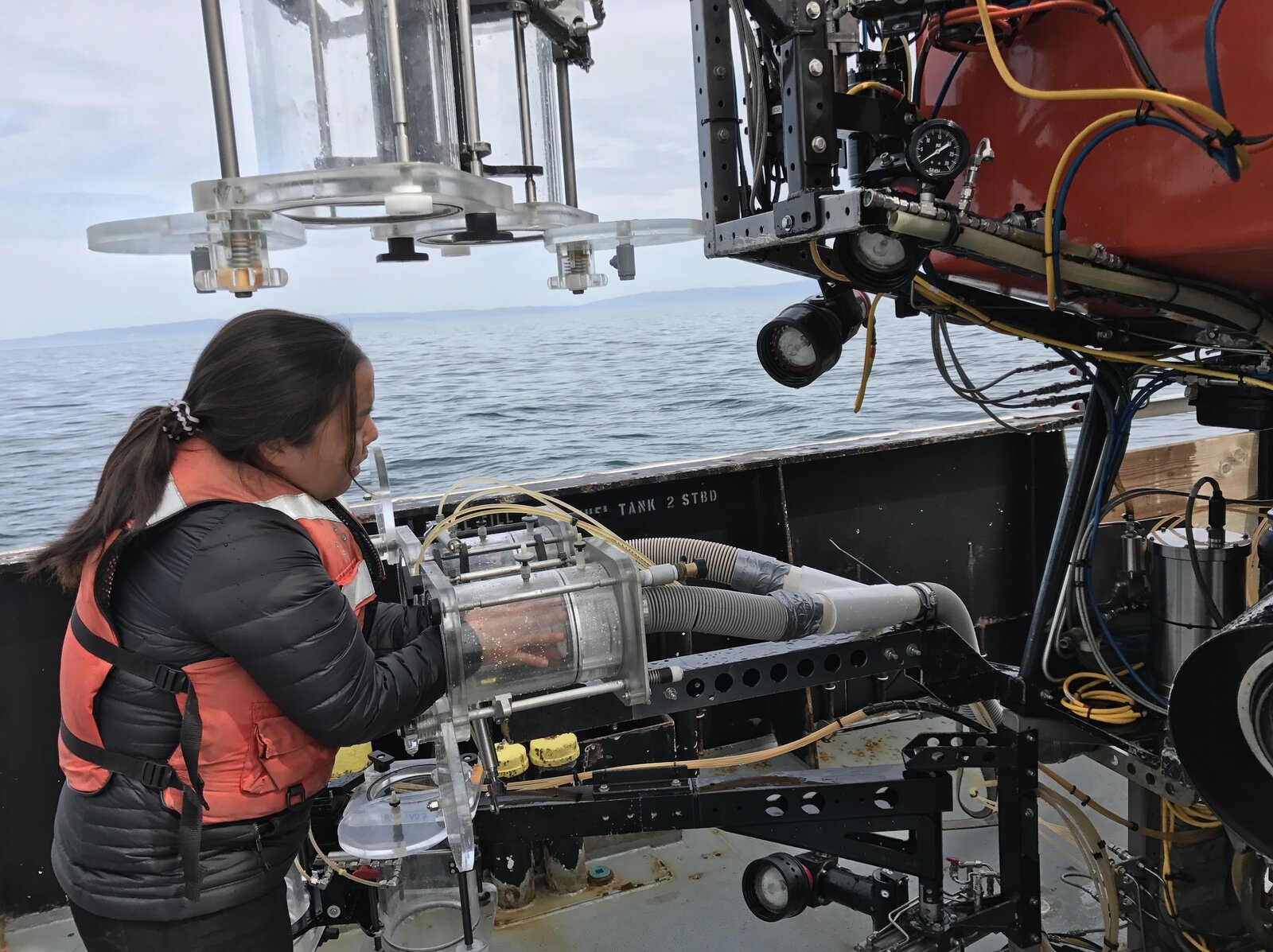 The team they created has been sending Ventana up to 3,000 feet deep into the Bay in search of plastic.

“The deep ocean is the largest ecosystem on the planet,” says Van Houtan, “and we don’t know anything about the plastic in the deep ocean.” Scientists do know about plastic floating on the surface, and have tried to measure how much there is. The Great Pacific garbage patch is just one of many giant eddies in the oceans where enormous amounts of plastic waste collects.

But beneath the surface? Not much. So Ventana made several dives to collect water samples at different depths. Technicians filtered the water, looking for microplastic, the tiny fragments and fibers you can barely see.

“What we found was actually pretty surprising,” Van Houtan says. “We found that most of the plastic is below the surface.” More, he says, than in the giant floating patches.

And also to their surprise, they found that submerged microplastics are widely distributed, from the surface to thousands of feet deep. 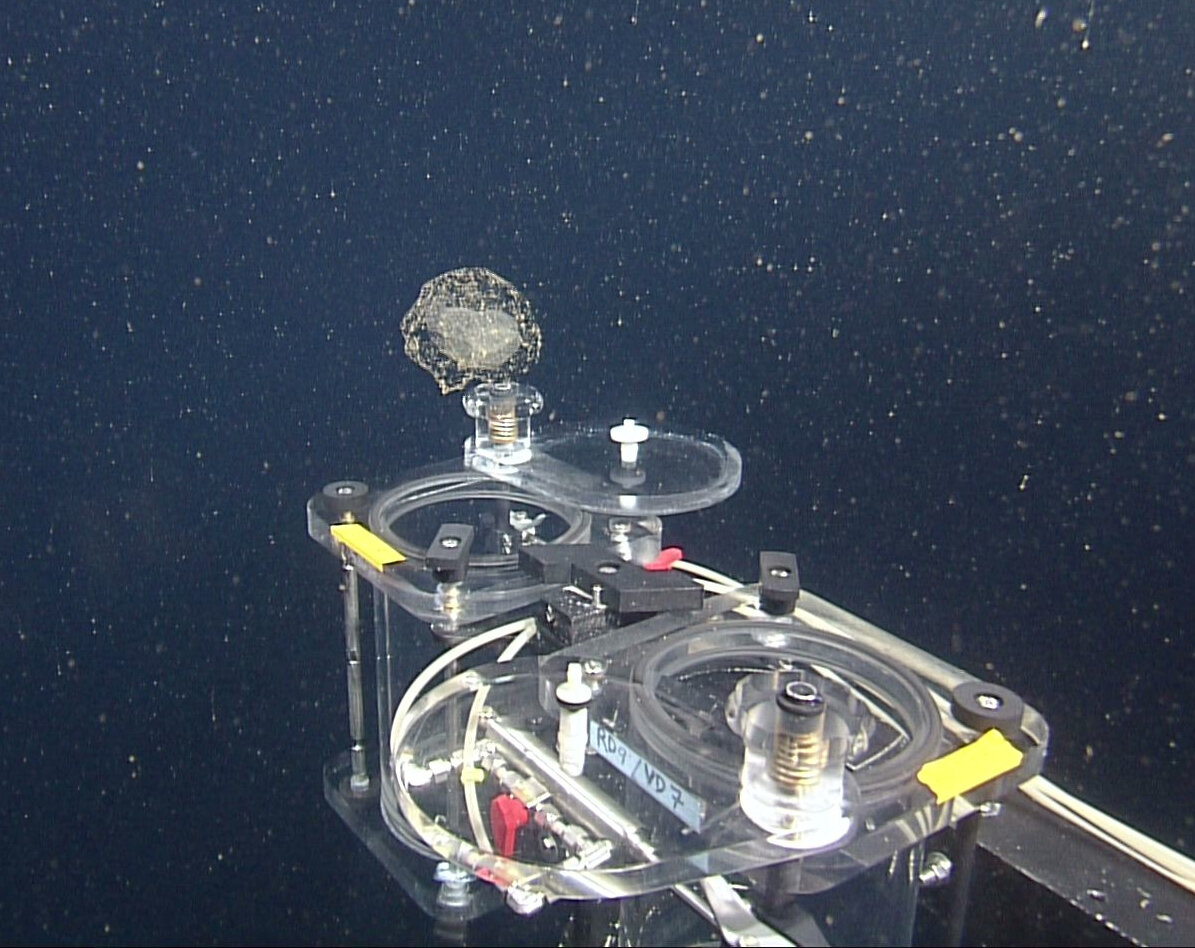 The Ventana is traveling up to 3,000 feet deep into the Monterey Bay in California, taking samples from sea creatures like larvaceans.

Moreover, the farther from shore they sampled, the more microplastics they found. That suggests it’s not just washing off the California coast. It’s coming from all over.

“We think the California current is actually carrying some of the microplastic debris from the north Pacific Ocean,” he says — kind of like trash washing down off a landfill that’s actually in the ocean.

And that trash gets eaten. Marine biologist Anela Choy is an assistant professor at the Scripps Institution of Oceanography in San Diego and was lead scientist on the study. She says the deep ocean is like a giant feeding trough. “It’s filled with animals,” she says, “and they’re not only moving up and down in the water column every day, forming the biggest migration on the planet, but they’re also feasting upon one another.”

For example, the deep ocean is filled with sea creatures like larvaceans that filter tiny organisms out of the water. They’re the size of tadpoles, but they’re called “giant larvaceans” because they build a yard-wide bubble of mucus around themselves — “snot houses,” Choy calls them. The mucus captures floating plankton. But it also captures plastic. “We found small plastic pieces in every single larvacean that we examined from different depths across the water column,” Choy says. Another filter feeder, the red crab, also contained plastic pieces — every one they caught.

Choy also has looked beyond Monterey Bay and higher up the food chain. In earlier research she did in the Pacific, she collected creatures called lancetfish — several feet long, with huge mouths and lots of saber-sharp teeth. They’re called the “dragons of the deep.” 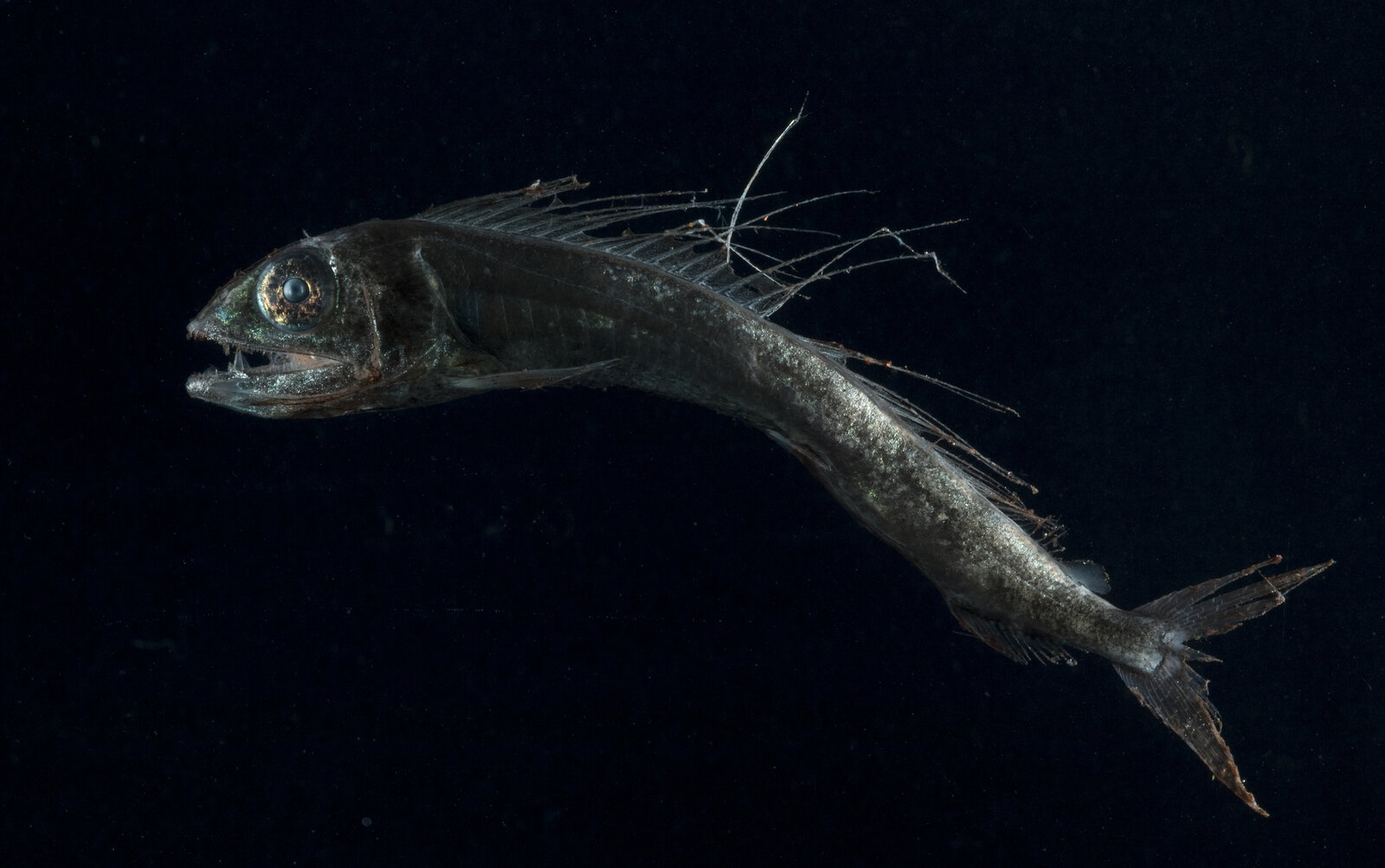 Researchers found plastic in the stomachs of one out of every three lancetfish they studied.

“We’ve looked now at over 2,000 lancetfish,” says Choy, “and we’ve found that about one in every three lancetfish has some kind of plastic in its stomach. It’s really shocking, because this fish actually doesn’t come to the surface as far as we know.” That suggests that plastic has spread through the water column.

Bruce Robison, a senior scientist with the Monterey Bay Aquarium Research Institute, says he was shocked at how much plastic they found. “The fact that plastics are so pervasive, that they are so widespread, is a staggering discovery, and we’d be foolish to ignore that,” he says. “Anything that humans introduce to that habitat is passing though these animals and being incorporated into the food web” — a web that leads up to marine animals people eat.

The Monterey Bay findings appear Thursday in the journal Nature Scientific Reports and only represent a local sample. But Robison says 70 years of manufacturing plastic may have created a global ocean problem. “We humans are constantly coming up with marvelous ideas that eventually turn around and bite us on the butt,” he says with a dry laugh.

And scientists are just beginning to diagnose the extent of that wound.