When I was young, cocktail hour as the work day ended was common — and it was the heavy duty stuff, no mixers. The days of cocktails came and went and now drinking appears to be less often on its own, more often with food and company.

Altho the liquor companies went thru a spell of thinking that meant all drinks should be sweetened, that period has also (fortunately) passed. One illustration of that is the hard (alcoholic) cider market which went thru a sticky phase of undrinkable berry ciders, most restaurants and stores with just a few brands are sticking with the Irish brand Magners or one of the British stalwarts such as Strongbow.

This article indicates the trend, at least in the US, may be moving slowly to no alcohol at all. While that’s rather unlikely to have holding power, any reduction in heavy drinking should have society benefits such as reducing traffic fatalities and less domestic violence fueled by too much alcohol. If it also results in the development of neighborhood hangouts that aren’t simply Starbucks locations, I’ll be thrilled.

People are sick of drinking. Investors are betting on the ‘sober curious’

New York (CNN Business)Getaway in Brooklyn was comfortably full for a Saturday night, when I came in to try my first “shrub” — an acidic beverage made from vinegar, fruit, sugar, club soda and zero alcohol.

I ordered a carrot-and-ginger shrub and hoped it would be palatable. I was pleasantly surprised, drank the whole thing and, voila, was not even tipsy. Even more exciting: my bill. It was a mere $15 for two drinks and a bread bowl — to soak up the non-alcoholic beverages, of course.

Getaway is a sober bar, a new kind of dry nightlife option that is cropping up in New York City. The idea is to provide outlets for people who want to socialize in a bar-like location, but without having to drink alcohol.

They are part of larger trend. People are paying greater attention to their mental health and wellness, and many Americans are specifically looking to reduce their alcohol intake. People of all ages are drinking less beer, while millennials are drinking less overall. And Silicon Valley is taking note, with tech companies reevaluating their alcohol policies and investors looking to capitalize on people who prefer not to drink.

“It’s such a part of the culture, especially here in San Francisco that I would go out for dinner and have two to three drinks everyday,” Silicon Valley entrepreneur Justin Kan, the CEO of law-tech startup Atrium, told CNN Business. He said he has seen a shift recently within his tech circle. “I was at a dinner with a lot of tech people last night and probably half the people weren’t drinking.”
Kan announced last month, in a post on Twitter, that he was giving up alcohol. He called drinking an unhealthy habit that had gotten in the way of his experiencing life. It wasn’t exactly unusual for Kan to share personal details about himself: He once livestreamed his life through the startup he co-founded in 2007 called Justin.tv, which ultimately became Twitch, the popular live streaming platform for gamers now owned by Amazon.
The same day he tweeted, Kan launched a group on chat app Telegram to connect with others who were similarly deciding to get sober from alcohol. He didn’t expect that more than 1,000 people would join.

New products for the sober — and ‘sober curious’

Their sales of alcoholic beverages have been declining, big alcohol companies, ranging from Heineken to AB InBev (the owner of popular beer brands such as Budweiser), see an opportunity: They’re investing in non-, or low-alcohol drinks. So too, startup investors and entrepreneurs are hoping to cater to the “sober curious,” people who for the sake of wellness are reevaluating their relationships with alcohol and how often they drink.
The emergence of sober bars is one of the signals that investor Anu Duggal points to when talking about the trend of not drinking. Duggal, who is based in New York City, said that like Kan, she is noticing “a number of people who are choosing not to drink.”
Duggal’s firm, Female Founders Fund — which has backed popular consumer startups such as Rent The Runway — is a recent investor in Kin Euphorics.
Kin’s first product is a non-alcoholic beverage called “High Rhode.” It is part adaptogen (a nontoxic plant that is claimed to have de-stressing effects), part nootropics (a supplement said to help with cognitive functions), and part botanics. On its website, the company notes that its statements have not been evaluated by the Food and Drug Administration and that its product is not intended to diagnose, prevent, treat, or cure any disease.

Sober curiosity is a real thing.”

Rather than an indulgence, Kin reasons that the consumption of its product is more for “self care after dark.” It wants to create a new market of products that don’t contain alcohol but also aren’t laden with sugar.
Kin is co-founded by Matthew Cauble, cofounder of Silicon Valley meal replacement startup Soylent and Jen Batchelor, who serves as CEO. It has already attracted venture capital firms including Canaan Partners, Refactor Capital, Weekend Fund, and Fifty Years, which aims to invest in companies using business to solve the world’s biggest problems. The company declined to disclose how much funding it has received.
“Sober curiosity is a real thing,” Batchelor told CNN Business.
Batchelor says Kin is trying to create more options for consumers. A lot of people feel their choices are to either go out and drink alcohol, or stay home alone. “If those are the two choices, then something is broken,” she said. “You can do the ‘feel good’ thing and still be out at a bar, still take a client out.”
The company is slated to release its second product later this month.

While it’s investing in new alcohol-free companies, Silicon Valley is also reexamining its own relationship with alcohol.
Alcohol has been one of the perks associated with tech and startup cultures over the years, with young companies embracing the idea of hustling hard, but also bonding over a drink, or several, with colleagues. Inevitably, the availability of alcohol in offices has come under scrutiny when companies run into unflattering alcohol-fueled incidents. One of the more memorable ones: When HR services startup Zenefits banned alcohol consumption after reportedly finding cigarettes, beer cups and used condoms in the company’s stairwell. 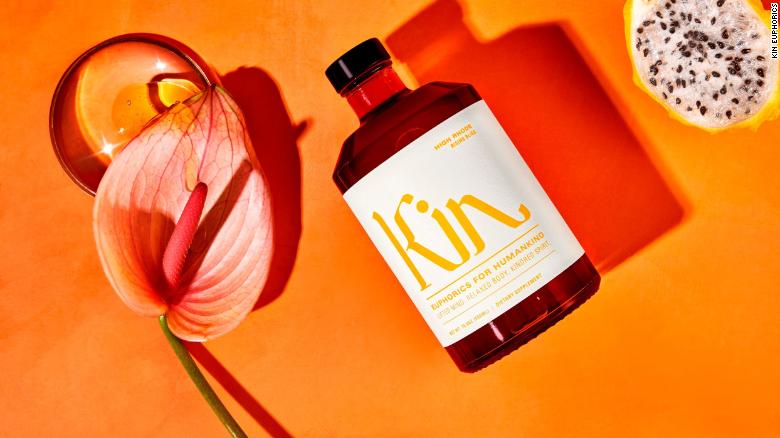 Kin believes that the consumption of its product is more for “self care after dark.” It wants to create a new market of products that don’t contain alcohol but also aren’t laden with sugar.
After coordinated walkouts by employees and contractors in November over its handling of sexual harassment accusations, Google announced a number of changes to its work culture, including cutting down on excessive drinking. “Harassment is never acceptable and alcohol is never an excuse. But one of the most common factors among the harassment complaints made today at Google is that the perpetrator had been drinking (~20% of cases),” the company said, adding that leaders will be charged with discouraging workers from excessive drinking. Some teams limit workers to two drinks per event.
WeWork, the co-working community behemoth, said last October that it was exploring curbing beer consumption in some of its New York City locations, limiting members to four 12-ounce glasses of beer per day. WeWork previously offered an unlimited beer on tap as a perk to people renting its co-working spaces. The company’s own corporate culture and the prevalence of alcohol at company events has been called into question by an ongoing lawsuit from a former employee.

Kin isn’t the only new brand trying to lessen the stigma of drinking a non-alcoholic beverage that is getting attention from startup investors.
Last month, Liquid Death made waves when it launched. The startup applies the bold marketing of energy drinks to a water-in-a-can beverage. Its tagline is “Murder Your Thirst.” Like an alcohol brand, it has an age gate on its website that says, “This water may give nightmares to persons under 18 years of age.”
The idea is to make consumers look cool while they keep hydrated, and to the unsuspecting eye, one may never know they’re downing simple H2O.
The original impetus, according to CEO and co-founder Mike Cessario, was to cater to heavy metal and punk rock fans. But the ability to drink water out of a can (which is more ecofriendly than plastic) and look like you’re drinking a beer or an energy drink, has broader appeal. 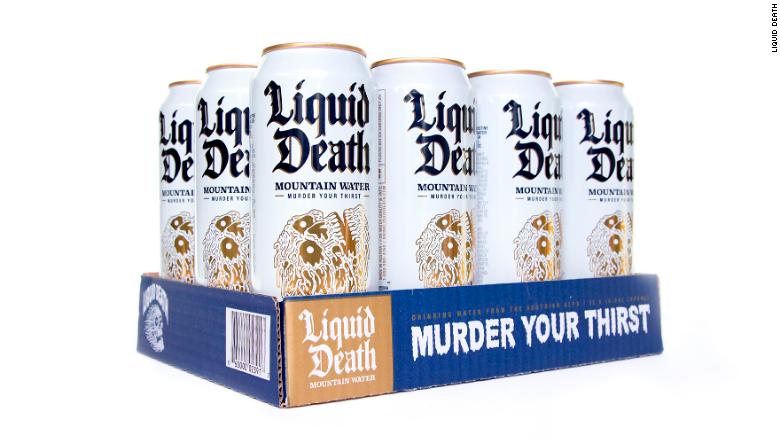 With the tagline “Murder Your Thirst,” Liquid Death applies the bold marketing of energy drinks to a water-in-a-can beverage.
It has already raised $1.6 million dollars from investors including Science, an incubator and tech studio that’s backed companies like Dollar Shave Club.
Science partner Mike Jones, who lives in Los Angeles, told CNN Business that he made a choice many years ago not to drink alcohol. “There’s many people in my circle that have chosen to not drink and chosen to be selective about what they put in their bodies,” said Jones. “We’re seeing a consciousness around it more and more.”
As for Kan, he says its difficult for him to unpack why now he is seeing a growing number of people similarly giving up on drinking.
Is it part of aging (Kan is now 35 — in a very different life stage than his early years in Silicon Valley more than a decade ago)? A tech industry thing where engineers are constantly tweaking and iterating on themselves? Or, is it something broader, he mused on a recent phone call.
Whatever it is, Kan, who also invests in startups, says he’s not particularly bullish that no-alcohol alternatives will takeover. He said it’s “very unlikely” alcohol will get replaced on a broad scale. “I have a hard time seeing it disappear from the American zeitgeist.”