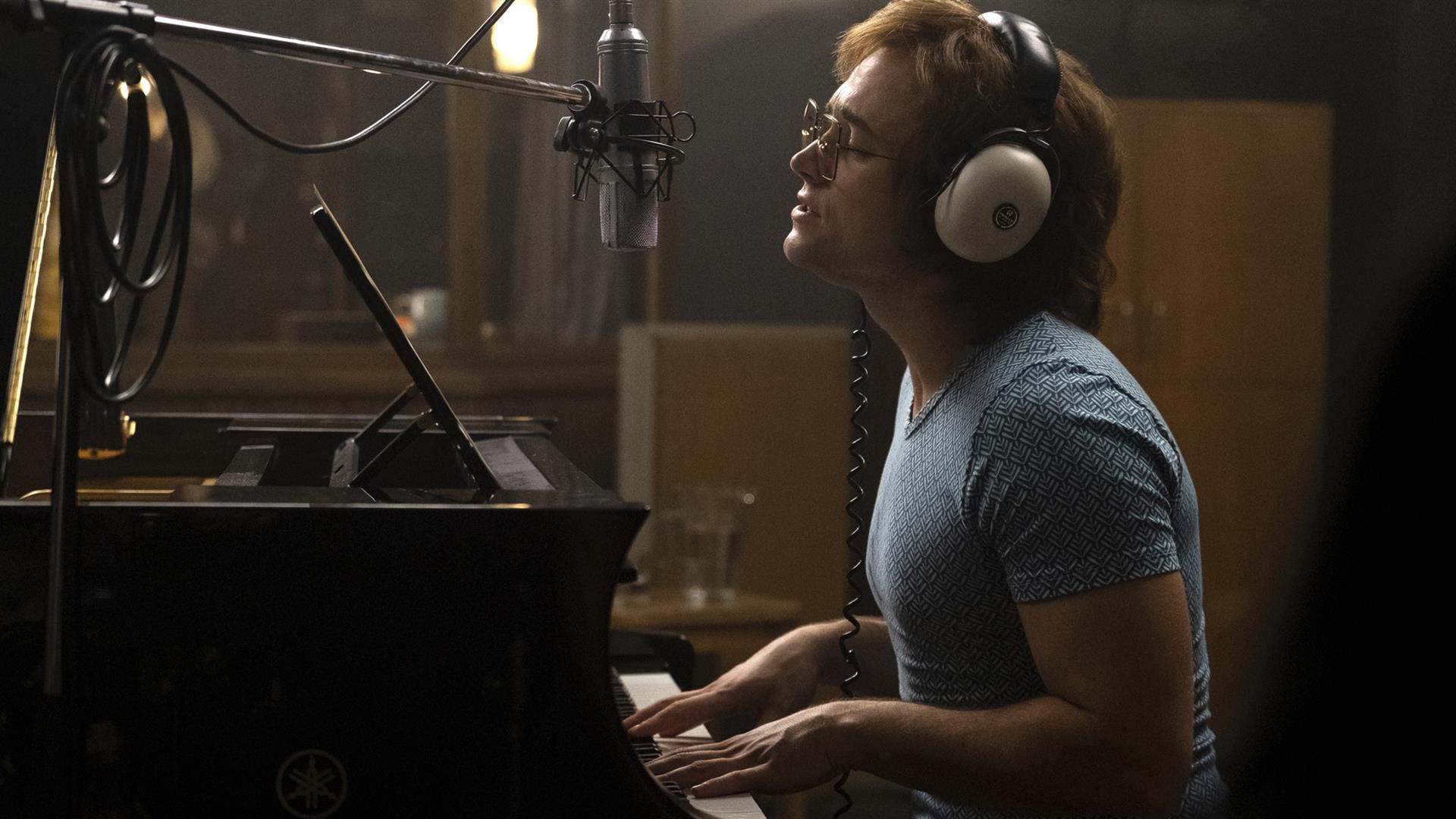 Much of the bountiful pleasure of “Rocketman,” a jukebox musical about the genesis, emergence and turbulent triumph of a self-creation named Elton John, comes from the film’s delight in embellishing its subject’s embellishments, gilding its legendary lily. The events of his breakthrough years are heightened with fantasy sequences that amount to a swirling, semi-surreal remix of his career and inner life. The colors are stunning, the settings are striking and the energy is irresistible, even if the pop psychologizing is pretty glib. Yet this gorgeously preposterous phantasmagoria wouldn’t hold us as it does if it weren’t based on something real and true, and two realities operate in tandem—the songs, whose beauty and power have only been amplified by the passage of time; and a starring performance of dazzling audacity by Taron Egerton, who evokes the great man without falling back on mimicry. Mr. Egerton’s singing and dancing, as well as his nuanced acting, are entirely convincing, yet a distinctive creation of his own.

The director was Dexter Fletcher, who finished last year’s “Bohemian Rhapsody,” subsequently festooned with Oscars, after Bryan Singer, the director of credit, was fired; he worked here from a screenplay by Lee Hall, who wrote “Billy Elliot” almost two decades ago. The framing device is a 12-steppish addicts’ group into whose midst Elton bursts, clad in birdman-with-horns regalia. He’s there to start shedding an astonishing list of addictions, but why the fancy get-up? In the larger context of his hurtling life the answer could be “why not?” Still, there’s an eventual explanation; “Rocketman” doesn’t lack for explanations, although many of them, like the frame itself, are shopworn enough to be endearing, as distinct from satisfying. 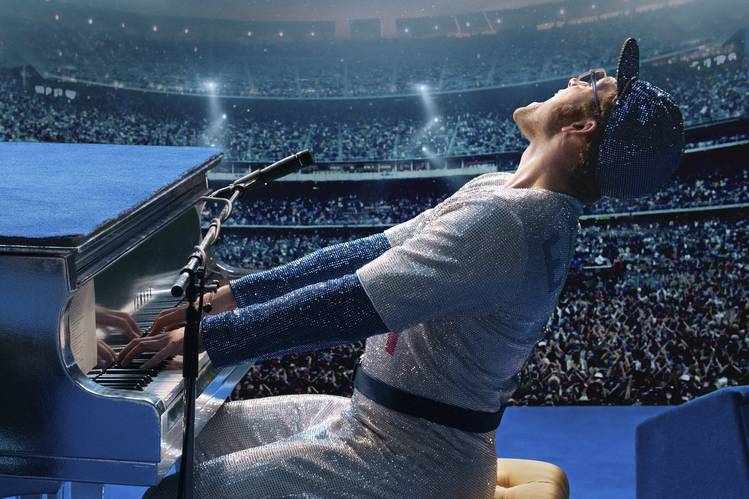 “What were you like as a child?” asks a member of the group. Following that cheerfully convenient setup, a stylized flashback with music connects the feathered apparition to who he once was: Reggie Dwight (played charmingly as a boy by Matthew Illesley), the son of a father who wouldn’t hug him, and wouldn’t hug him, and wouldn’t hug him. Reggie’s stern father, Stanley (Steven Mackintosh), is relentlessly stern; his dim mother, Sheila Eileen (Bryce Dallas Howard), is repetitively dim; and his hunger for love may not make him all that special. But his gift for music does.

Whatever the film’s shortfall in psychodynamics, “Rocketman” invokes the spirit and specifics of music—enormously aided by Mr. Egerton’s performance—to illuminate the hero’s soul. The first time the light goes on is when Reggie, as a 5-year-old, picks out a melody with one finger on a battered piano; it’s a lovely moment, as simple as it is prophetic. The first time the action explodes into choreographed pandemonium is when Reggie rocks a local pub, then his whole neighborhood, with a riotous rendition of “Saturday Night’s Alright for Fighting.”

Yet we don’t get a full sense of what’s driving the young man until Reggie, still in his teens, intersects with Bernie Taupin (Jamie Bell), the budding lyricist who will become his lifelong collaborator. When the superstar-to-be sees the lyrics to “Your Song” for the first time and sings the melody spontaneously, it’s easy to believe the now-beloved piece of music really did emerge fully formed, in just that way, from an artist who had, at that very instant, discovered who he was meant to be. (Shortly after meeting Taupin, Reggie took the name “Elton John,” honoring two members of his Bluesology band, Elton Dean and Long John Baldry, although the film implies, with a puckish sight gag, that the second name referred to John Lennon.)

The music begins to flow in glorious torrents, while Elton invents increasingly extravagant—and in this telling anguished—versions of himself because, as the film has it, he’s a man who can’t find love. And “Rocketman” makes it eloquently and abundantly clear, as no major studio production has until now, that he’s a gay man who can’t find love. Early in his career he has a passionate love affair with the music manager John Reid, who is played by Richard Madden. “You can do anything you want,” Reid tells him. You can be anyone you want. And it’s going to be a wild ride.” 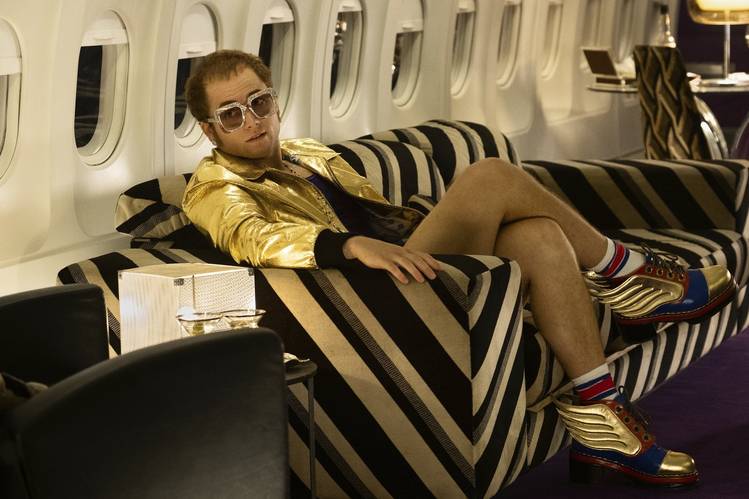 So it is, a heedless plunge into Southern California hedonism after a spectacular debut at the world-famous Troubadour. But Reid’s sudden metamorphosis into a figure of seething evil is inexplicable, and the standard-brand hedonism—poolside parties, exotic chemicals, a druggy dance of depravity—is the least interesting part of the film, except for a marvelous piece of business in which, not to give too much away, gravity is briefly revoked.

What provides poignant counterpoint to Elton’s fevered searching is the place Bernie Taupin continues to play in this version of his life—not only as his writing partner, but as a heterosexual man who loves him like a brother. And what makes “Rocketman” a gift of entertainment that keeps on giving is the brilliance of the musical numbers coupled with the complexity of the star’s portrayal. Physically Mr. Egerton is far from a body double for the unlithe character he’s playing. But how he plays him is the remarkable thing—with a quicksilver mix of sweetness and rage, of steely purpose and vulnerability. He brings a high-heeled-boots-on-the ground reality to the most lavish fantasy you’re likely to see in a month of Saturday nights.

Write to Joe Morgenstern at joe.morgenstern@wsj.com