Another reason for truly hating the concept of water bottled in plastic is who’s selling it and where the water is from. Large multinationals have purchased water rights in places that truly can’t spare their fresh water supply, whether used for agriculture, for commercial use, or individual use. Moreover, those descriptions of the water as coming from pure sources? Hogwash. They just drain the local aquifer or other water supply as fast as possible without much regard to any local springs or any other pure water source that is being destroyed by the wholesale removal of the liquid gold.

Please think hard about simply buying a water bottle and refilling it from a water fountain? Want to be a “greener” person and a more informed citizen of the planet? This should be one of your first steps.

For all the innovation and choice that define the food and drink industries, if you want to make money, you could do a lot worse than bung some water in a bottle and flog it. A litre of tap water, the stuff we have ingeniously piped into our homes, costs less than half a penny. A litre of bottled water can cost well over a pound, especially for something fancy that has been sucked through a mountain.

Yet the bottled water market is more buoyant than ever, defying the plastics backlash inspired by stricken albatrosses on the BBC’s Blue Planet, and a broader, growing sense that something has to change.

Sales in the UK were worth a record £558.4m in the year to last November, an increase of 7%, according to the latest figures from the market analyst Kantar. Separate data from the analysts Nielsen show that last year we guzzled more than 2.2bn litres of bottled water, including “take-home” and “on-the-go” products. That’s an annual rise in volume of 8.5%.

Imagine laying out half-litre bottles on the pitch at Wembley Stadium. You could fit 1.7m bottles on the grass, packed into a tight grid. Now imagine building up layers of bottles, covering the same area, to build a tower. To contain all the bottled water we buy each year, you would end up with a 514-metre skyscraper – 200 metres taller than the Shard.

Environmental campaigners are struggling to fathom why nations blessed with clean tap water grow only fonder of the bottle. “It’s very surprising to me,” says Sam Chetan-Walsh, a political adviser at Greenpeace and campaigner against ocean plastic. “Public awareness has never been higher, but the message is not quite reaching all the people it needs to.”

Where it is heard, the message is stark. As well as requiring oceans of fossil fuels to make and ship, single-use plastics of all types are polluting our cities and seas. Blue Planet II, broadcast in 2017, showed how albatrosses unwittingly feed plastic fragments to their chicks, ultimately killing them, and how even dolphin milk can become contaminated.

Campaigners cite the show as a watershed moment, and moves against various plastics have gathered pace, from shopping bags to straws and plastic-lined coffee cups. Chetan-Walsh argues that bottled water is different because the alternatives are so obvious. “If a product that is so nakedly unnecessary can exist, then the whole system is failing,” he says.

Hope is not entirely out of reach. That plastic skyscraper conceals attempts in the bottled water industry to change. If nothing else, the rate of growth has begun to ease (sales were up 7% in the year to November 2018, compared with 8% the previous year).

But even if large numbers of us are quitting bottled water because of care for the environment, others are taking it up. The introduction of the “sugar tax” on juices and fizzy drinks has pushed more people to bottled water, while health awareness has boosted its desirability. Kantar says tap water consumption is growing at roughly the same pace (we still drink almost three times as much tap water as bottled water).

So the plastic tide only creeps higher. The industry is quick to point out that all its bottles are recyclable. “But collection rates are, at the most generous estimates, 56%, so the actual recycling rate will be lower than that,” Chetan-Walsh says. And while bottles may be recyclable, very few are made of recycled plastic. Highland Spring launched recycled half-litre “eco” bottles alongside its standard bottles in January; Evian has vowed to use only recycled plastic across its range by 2025.

Chetan-Walsh believes in a ban on single-use bottles. Bans exist in some places. Glastonbury festival organisers announced that water bottles will not be sold this summer. San Francisco has banned them from city property and events. Last year, the UK parliament set out plans to ban single-use plastic from its estate.

Water bottlers, unsurprisingly, don’t support bans. But they raise concerns about health rather than bottom lines. Last month, the chief executive of Harrogate Water, James Cain, said that bans would “result in greater consumption of sugary drinks, adding to all the health dangers of obesity, diabetes and tooth decay”. 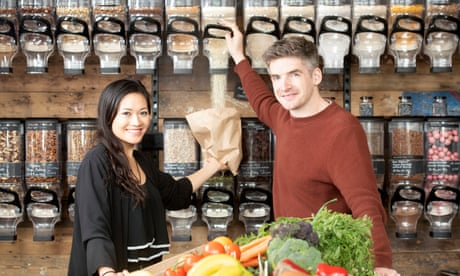 Kinvara Carey, general manager of the Natural Hydration Council, an association of the biggest bottled water manufacturers, cites a survey in which people were asked what they would do if bottled water were not available. “Forty-four per cent would buy another drink, which is not great, 14% would go without and 4.5% said they would find a fountain,” she says. “The choice is important.”

What if fountains were more numerous, and tap water more clearly available in cafes, restaurants and elsewhere? The London mayor, Sadiq Khan, is installing dozens of fountains in partnership with Thames Water. There are similar initiatives elsewhere. Before plastic and the marketing that made us think we needed bottled water in the first place, fountains were an urban fixture.

Greenpeace, among others, is also pushing for a “deposit return” scheme in which a levy on bottled water would be refunded to customers who returned the plastic for recycling.

Even if bottled water sales are growing slightly more slowly, the industry is racing to adapt to changing concerns and tastes. Flavoured water is booming: sales of the sparkling variety shot up by 20%, according to the latest Kantar data. Meanwhile, brands including Evian, as well as a range of startups, are selling high-end reusable bottles. And if you must fill them with tap water, why not add flavouring?

As the owner of multiple sugary drink brands – and Aquafina bottled water – PepsiCo is facing challenges on health and environmental fronts. Last year, the company bought SodaStream for $3.2bn (the drinks machines make tap water fizzy; you add flavours). It also launched Drinkfinity, a range of fancy bottles that work with tap water and flavour pods (think more lemongrass and spirulina than 7 Up). The bottle is reusable. The pods? Not so much, and, yes, they are made of plastic, although Pepsi invites users to post them back for recycling.

As is so often the case, ingenious marketing can trump reason; awareness is rarely enough. “There is always this kind of slip between concern, intent and changed behaviour,” says Giles Quick, an analyst at Kantar. “The best example is five a day. Almost everyone is aware of it, but something like 15% of us achieve it.” Unless a far-reaching bottle ban does come into force, it will be up to consumers to not only demand change – but to act themselves.