It’s Not You. Allergy Seasons Are Getting Longer and Worse

If it feels like the annual allergy season is getting longer and worse, it’s because it is.

Climate researchers say rising temperatures and higher concentrations of carbon dioxide in the atmosphere are prolonging the pollen production seasons and increasing the amount of pollen that plants produce.

For the more than 26 million Americans who suffer from seasonal allergies, also known as allergic rhinitis, or “hay fever,” that means a longer span of irritated eyes, sneezing, a runny nose and congestion. Health care professionals also believe that the combination of a longer growing seasons and an increase in pollen production is linked to a spike in patients developing allergy symptoms, an American Academy of Allergy Asthma and Immunology (AAAI) survey found.

Leonard Bielory, a physician at Robert Wood Johnson University Hospital and professor and allergy specialist at the Rutgers University Center of Environmental Prediction, said that “we’re seeing increases in both the number of people with allergies and what they’re allergic to. Should warming continue, then more people will be exposed to seasonal allergens with subsequent effects on public health.”

In North America, seasonal allergies begin with tree pollen in the spring, followed by weeds and grass in the summer and culminating with ragweed in late summer into early fall. 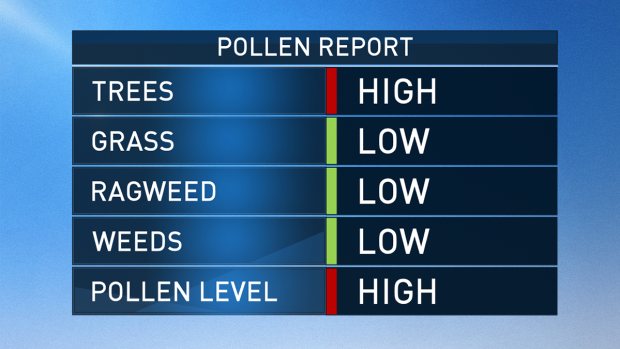 Across the U.S., fall’s first frost is happening on average about a week later compared to 30 years ago, while spring’s last frost is occurring a week earlier, according to analysis by Climate Central. In parts of Oregon and New Mexico, researchers found the freeze-free season grew by at least two months — among the biggest increases in the country. And in Philadelphia the growing season increased by 29 days/weeks since 1970.

Lewis Ziska, a research plant physiologist with the U.S. Department of Agriculture (USDA), said data shows northern areas of the country are experiencing the most drastic increases in environmental allergens. Ziska explained that in the more humid, rainier southern region, water vapor boosts cloud coverage and suppresses warming while CO2 is accelerating warming in drier areas to the north.

In studies of the effects of CO2 on ragweed, the third-most common allergen in the U.S., Ziska’s team found that plants exposed to warmer temperatures and higher levels of carbon dioxide grew more vigorously and produced more pollen.

What’s more, the pollen produced under higher CO2 conditions were more allergenic, or more potent, according to the 2016 U.S. National Climate Assessment report. Ziska cautioned that while there appears to be a link between pollen intensity and health impacts, an official connection is less well established.

Still, over the past few decades, the prevalence of hay fever among Americans has increased from 10 percent of the U.S. population in 1970 to 30 percent in 2000, the National Climate Assessment reported.

For some people, seasonal allergies can also trigger symptoms of asthma — which has become more common, too. Asthma rates have increased from approximately eight to 55 cases per 1,000 persons to around 55 to 90 cases per 1,000 persons over that same time period. Asthma rates are even higher among African-Americans, low-income households and children.

According to the Centers for Disease Control and Prevention, asthma is the third-ranked cause of hospitalization among children under the age of 15 and accounted for 1.8 million emergency room visits in 2015. In 2016, it killed 3,518 people in the U.S.

Pollen season is on its way, as this footage caught on camera shows when a helicopter flying by a grove of trees kicked up a pollen vortex.

And unless emissions of heat-trapping gases start dropping dramatically, experts predict things are going to get worse — not just for those who suffer from pollen allergy, but also for those who never had allergies before.

Dr. Kim Knowlton, deputy director of the Science Center at the Natural Resources Defense Council and assistant clinical professor at Columbia University Mailman School of Public Health, warned that the northward shifts in the distribution of some tree species, including oaks, could alter the type and quantity of allergenic pollen to which people in different geographic areas are exposed.

“It is likely to mean a continuing trend toward longer pollen production seasons, which could mean symptoms over more of the year, possibly more people sensitized to pollen allergen, and more intense symptoms among those already allergic to pollen,” Knowlton said.

The American College of Allergy, Asthma and Immunology advises people who suffer from hay fever to stay indoor when pollen counts are at their peak, usually during the midmorning and early evening, in order to reduce exposure to the allergens that trigger symptoms.

Here are some other tips from the group:

Since most allergens that trigger hay fever are airborne, it’s not easy to avoid them. If symptoms can’t be mitigated by simply avoiding triggers, your allergist may recommend medications that reduce nasal congestion, sneezing, irritated eyes and an itchy and runny nose. Some medications may have side effects, so discuss these treatments with your health care provider before taking them.