The Restaurant at Neiman Marcus, the One Place in Hudson Yards That Feels Like New York

The Zodiac Room restaurant, at the Neiman Marcus in Hudson Yards, knows exactly who its customers are: mostly women, mostly luxury shoppers, and those of us who wish to spend a meal pretending to be one.

Photographs by Heather Sten for The New Yorker

In March of 1955, the famed Texas cook Helen Corbitt called up the businessman Stanley Marcus, of Neiman Marcus, asking if he still had a job for her. For years, Marcus had been urging Corbitt to leave her job managing the Driskill Hotel, in Austin, and move to Dallas and take over culinary operations at the department store, his family’s glittering monument to luxury in the oil-rich city. She had always put him off with one excuse or another, but now, at last, the timing was right. Corbitt took over the Zodiac Room, the department store’s elegant sixth-floor restaurant, two days later, and introduced a menu of exquisitely modern sophistication, much of it employing fruit in unexpected ways: chicken salad bejewelled with grapes and almonds, gelatin “soufflés” of orange juice and cream, citrus salad dressed with sweet-savory poppy-seed dressing. A diner, upon settling into her seat, would be presented with a demitasse of chicken consommé and a towering popover, steaming hot and yolky gold, to be torn open and dressed with a pouf of whipped strawberry butter.

Corbitt left Neiman Marcus in 1969, but the store, in the half century since, has spread her culinary vision well beyond Texas. Most of the forty-three Neiman Marcus locations around the country have restaurants—and they all, in various ways, continue to pay homage to Corbitt’s cooking. The popovers, in particular, have become so indelibly associated with the store that a retail superfan may purchase, for eighteen dollars, an officially branded popover pan, made from carbon steel with an enamel coating of glossy, nail-varnish red. 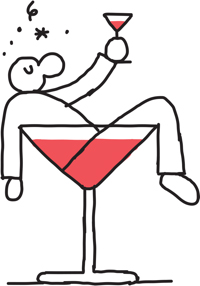 This pan is available to shoppers at the newest Neiman Marcus, located inside Hudson Yards, the slick new multi-use development that looms over Manhattan’s West Side like a glassy, low-polygon Godzilla. After six years of construction, Hudson Yards at last opened to the public, two weeks ago. It is a marble-floored hedge maze, equal parts Dubai shopping mall and casino-less Las Vegas casino, its collection of blandly aspirational retail outlets interspersed with the beckoning porticos of blandly aspirational restaurants.

The Hudson Yards Neiman Marcus represents the store’s first foray into New York City—if you exclude Bergdorf Goodman, which the brand’s parent company acquired in 1972. Prominent signage for the department store is posted throughout the complex, including a ten-foot-high logo mounted on the wall of the mall’s glassy atrium, as if the entire building were titled “Neiman Marcus.” But the emporium itself is tucked away high up in the commercial stack, sharing the fifth floor with a few of the higher-end dining options. A visitor entering the store via the smaller of its two entrances—through a kitchenware gantlet in which the branded popover pans are on display, alongside a fifteen-hundred-dollar Smeg juicer designed by Dolce & Gabbana and artisanal gummy candies flavored with Corona Light beer—then ascends still farther upward, by escalator, to reach the Zodiac Room, on the seventh floor, unassumingly located at the back of the vast, carpeted plateau of women’s designer collections, just past racks of thousand-dollar sweaters from The Row and Libertine.

The new Neiman Marcus, like many department stores, is labyrinthine and largely windowless, a soft, perfumed non-place set within the larger non-place of Hudson Yards. On the switchbacking ascent to the Zodiac Room, it’s easy to lose track of which direction you’re facing, or even of the fact that you’re in New York at all. But when you enter the restaurant’s main dining room, via an écru bar area with soft seating, you burst back into reality, a hundred feet above the city. In virtually all of the other public spaces in Hudson Yards, the windows face westward, forcing visitors’ attention to the massive honeycomb of the Vessel, the designer Thomas Heatherwick’s selfie-friendly stepwell to nowhere. Those at the Zodiac Room instead look south and east, out onto real sunlight, and brick-sided buildings, and the streaming yellow cabs of Tenth Avenue.

“There’s not much at Hudson Yards that can’t be found elsewhere,” my colleague Alexandra Schwartz wrote in a recent piece about the development’s opening, wondering what might entice a New Yorker to visit. The same question plagues the restaurants on site, some two dozen in all: Whom are they for? Perhaps they’re there to serve the thousands of people who will live and work within the towers of Hudson Yards and prefer never to leave, or to catch the throngs of tourists who’ve hiked the High Line, ready to cap their mile-long meander through a glassy canyon of starchitecture with a visit to a mall. The target customer nevertheless seems fuzzy—a quick Shackburger between visits to Sephora and Madewell, sure, but what about the finer-dining options? These include Wild Ink, a pan-Asian lounge with a dark bamboo ceiling and undulating green-leather booths; Thomas Keller’s TAK Room, where butter is formed into curled shells à la minute by way of a tabletop extruding device; and the pastel Anglophilic fantasia of Queensyard, which boasts a version of outdoor seating inside a mall corridor.

Within this self-contained world, the Zodiac Room may be the only restaurant with a clear sense of purpose, and the only one in which a person actually feels like she’s a part of the city beyond. It knows exactly who its customers are: mostly women, mostly luxury shoppers, and a few of us who wish to spend a meal pretending to be belong among them. The room, decorated with restrained opulence in matte brass and smoky blues (Helen Corbitt’s favorite color), seems already to be attracting its intended clientele. When I visited for lunch, a few days ago, I found a tawny sea of tight jawlines and Goyard totes, women with blowouts as pristine as their natty Gucci loafers. Much like Fred’s, the socialite canteen inside Barneys, or BG at Bergdorf’s, this is a restaurant for ladies who lunch; appropriately, there is no menu for dinner. (The Zodiac Room closes at 8 p.m., an hour before the rest of the store.) There is, of course, quiche.

This is also one of the few places within Hudson Yards that seems to have any sense of history. The first Zodiac Room (now called simply Zodiac), on the sixth floor of Neiman Marcus’s original building, in downtown Dallas, has served lunch to the elegant women of Texas since Corbitt’s time. Here in New York, Corbitt’s spirit is not so much channelled as it is fully embodied. Fashion models do not swan between the tables advertising the latest styles, as they did in Corbitt’s day. (In the nineteen-sixties, a young Raquel Welch kick-started her career as a Neiman Marcus luncheon mannequin.) But otherwise my meal proceeded just as it would have back then, starting with a little cup of divine chicken consommé, richly savory with a hint of carrot in the stock, served alongside, of course, a massive amber popover with bright-pink strawberry butter.

A Corbitt completist can make an entire meal from her original recipes, including her mandarin-orange soufflé, a fluted ziggurat of creamsicle jello, which comes plated with a scoop of her famous chicken salad. I opted for a more modern lunch, developed by the Neiman Marcus culinary team especially for this location: the Hudson Salad, a twenty-two-dollar pile of shaved raw vegetables, diced avocado, and slivered apricots tossed in a gingery miso dressing, the store’s answer to uptown’s ubiquitous chopped salads. It was crisp and light, with flashes of sweetness. Tucked into a blue-leather banquette, near a window beyond which the city played like a movie, I could almost forget the soaring existential emptiness of the building I was sitting within. “The dining room is one of the last outposts of civilization,” Helen Corbitt wrote in one of her many cookbooks. “Let’s keep it that way.”