Those opposed to Obamacare have failed utterly to come forth with a proposal that would provide the broad coverage, (relatively) reasonable premiums, and societal benefits of Obamacare. When the workers who buy the goods, who pay the taxes, and do the work to produce the goods are unhealthy, all of society pays. Doesn’t it make sense to have a healthy, productive society? And isn’t it less expensive? There’s a reason even staunchly red states have found it wise to expand Medicaid under Obamacare.

The NY Times produced this lovely (appalling) list of the different groups of millions of people who would be adversely affected by its repeal.

The Affordable Care Act was already in peril after a federal judge in Texas invalidated the entire law late last year. But the stakes ramped up again this week, when President Trump’s Justice Department announced it had changed its position and agreed with the judge that the entire law, not just three pieces of it, should be scrapped.

A coalition of states is appealing the ruling. If it is upheld, tens of millions more people would be affected than those who already rely on the nine-year-old law for health insurance. Also known as Obamacare, the law touches the lives of most Americans, from nursing mothers to people eating at chain restaurants.

Here are some potential consequences, based on estimates by various groups.

21 MILLION
People who could lose their health insurance.

Of the 23 million people who either buy health insurance through the marketplaces set up by the law (11.4 million) or receive coverage through the expansion of Medicaid (12 million), about 21 million are most at risk if Obamacare is struck down. That includes 9.2 million who receive federal subsidies.

On average, the subsidies covered $525 of a $612 monthly premium for customers in the 39 states that use the federal marketplace, HealthCare.gov, according to a new report from the Department of Health and Human Services. If the marketplaces and subsidies go away, a comprehensive health plan would become unaffordable for most of those people and many of them would become uninsured.

States could not possibly replace the full amount of federal subsidies with state funds.

Medicaid, the government insurance program for the poor that is jointly funded by the federal government and the states, has been the workhorse of Obamacare. If the health law were struck down, more than 12 million low-income adults who have gained Medicaid coverage through the law’s expansion of the program could lose it.

In all, according to the Urban Institute, enrollment in the program would drop by more than 15 million, including roughly three million children who got Medicaid or the Children’s Health Insurance Program when their parents signed up for coverage.

The law ensures that states will never have to pay more than 10 percent of costs for their expanded Medicaid population; few if any states would be able to pick up the remaining 90 percent to keep their programs going. Over all, the federal government’s tab was $62 billion last year, according to the Congressional Budget Office.

Losing free health insurance would, of course, also mean worse access to care and, quite possibly, worse health for the millions who would be affected. Among other things, studies have found that Medicaid expansion has led to better access to preventive screenings, medications and mental health services.

The health law took effect just as the opioid epidemic was spreading to all corners of the country, and health officials in many states say that one of its biggest benefits has been providing access to addiction treatment. It requires insurance companies to cover substance abuse treatment, and they could stop if the law were struck down.

The biggest group able to access addiction treatment under the law is adults who have gained Medicaid coverage. The Kaiser Family Foundation estimated that 40 percent of people from 18 to 65 with opioid addiction — roughly 800,000 — are on Medicaid, many or most of whom became eligible for it through the health law. Kaiser also found that in 2016, Americans with Medicaid coverage were twice as likely as those with no insurance to receive any treatment for addiction.

The growing insured population in many states has also drawn more treatment providers, including methadone clinics, inpatient programs and primary care doctorswho prescribe two other anti-craving medications, buprenorphine and naltrexone. These significant expansions of addiction care could shrink if the law were struck down, leaving a handful of federal grant programs as the main sources of funds.

From the team at NYT Parenting (launching soon!): Get the latest news and guidance for parents. We’ll celebrate the little parenting moments that mean a lot—and share stories that matter to families. 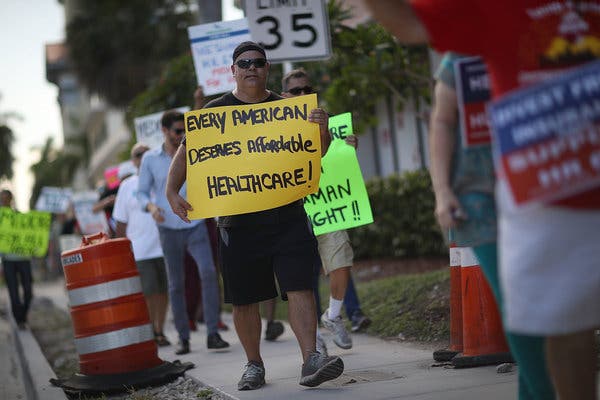 As many as 133 million Americans — roughly half the population under the age of 65 — have pre-existing medical conditions that could disqualify them from buying a health insurance policy or cause them to pay significantly higher premiums if the health law were overturned, according to a government analysis done in 2017. An existing medical condition includes such common ailments as high blood pressure or asthma, any of which could require someone buying insurance on their own to pay much more for a policy, if they could get one at all.

Under the A.C.A., no one can be denied coverage under any circumstance, and insurance companies cannot retroactively cancel a policy unless they find evidence of fraud. The Kaiser Family Foundation estimated that 52 million people have conditions serious enough that insurers would outright deny them coverage if the A.C.A. were not in effect, according to an analysis it did two years ago. Its estimates are based on the guidelines insurers had in place about whom to cover before the federal law was enacted.

Most Americans would still be able to get coverage under a plan provided by an employer or under a federal program, as they did before the law was passed, but protections for pre-existing conditions are particularly important to those who want to start their own businesses or retire early. Employers would sometimes refuse to cover certain conditions, and companies would have to decide if they would drop any of the conditions they are now required to cover.

The need to protect people with existing medical conditions from discrimination by insurers was a central theme in the midterm elections, and Democrats attributed much of their success in reclaiming control of the House of Representatives to voters’ desire to safeguard those protections. Many Republicans also promised to keep this provision of the law, although exactly how was unclear. Before the law, some individuals were sent to high-risk pools operated by states, but even that coverage was often inadequate.

171 MILLION
Americans who no longer face caps on expensive treatments.

The 156 million Americans who get coverage through an employer, as well as the roughly 15 million enrolled in Obamacare and other plans in the individual insurance market, are protected from caps that insurers and employers used to limit how much they had to pay out in coverage each year or over a lifetime. Before the A.C.A., people with conditions like cancer or hemophilia that were very expensive to treat often faced enormous out-of-pocket costs once their medical bills reached these caps.

While not all health coverage was capped, most companies had some sort of limit in place in 2009. A 2017 Brookings analysis estimated that 109 million people would face lifetime limits on their coverage without the health law, with some companies saying they would cover no more than $1 million in medical bills per employee. The vast majority of people never hit those limits, but some who did were forced into bankruptcy or went without treatment.

About 60 million people are covered under Medicare, the federal insurance program that covers people over 65 years old and people with disabilities. Even though the main aim of the A.C.A. was to overhaul the health insurance markets, the law “touches virtually every part of Medicare,” said Tricia Neuman, a senior vice president for the Kaiser Family Foundation, which did an analysis of the law’s repeal. Overturning the law would be “very disruptive,” she said.

Medicare beneficiaries would have to pay more for preventive care, like a wellness visit or diabetes check, which are now free. They would also have to pay more toward their prescription drugs. About five million people faced the so-called Medicare doughnut hole, or coverage gap, in 2016, which the A.C.A. sought to eliminate. If the law were overturned, that coverage gap would widen again.

The law also made other changes, like cutting the amount the federal government paid hospitals and other providers as well as private Medicare Advantage plans. Undoing the cuts could increase the program’s overall costs by hundreds of millions of dollars, according to Ms. Neuman. Premiums for as many as 55 million people under the program could go up as a result.

The A.C.A. was also responsible for promoting experiments into new ways of paying hospitals and doctors, creating vehicles like accountable care organizations to help hospitals, doctors and others to better coordinate patients’ care.

If the groups save Medicare money on the care they provide, they get to keep some of those savings. About 12 million people are now enrolled in these Medicare groups, and it is unclear what would happen to these experiments if the law were deemed unconstitutional. Some of Mr. Trump’s initiatives, like the efforts to lower drug prices, would also be hindered without the federal authority established under the A.C.A.

2 MILLION
Young adults with coverage through their parents’ plans.

The A.C.A. required employers to cover their employees’ children under the age of 26, and it is one of the law’s most popular provisions. Roughly two million young adults are covered under a parent’s insurance plan, according to a 2016 government estimate. If the law were struck down, employers would have to decide if they would continue to offer the coverage. Dorian Smith, a partner at Mercer, a benefits consulting firm, predicted that many companies would most likely continue.

Doctors and hospitals could lose a crucial source of revenue, as some people lose insurance. The Urban Institute estimated that nationwide, without the A.C.A., the cost of care for people who cannot pay for it could increase as much as $50.2 billion.

Hospitals and other medical providers would incur losses, as many now have higher revenues and reduced costs for uncompensated care in states that expanded Medicaid. A study in 2017 by the Commonwealth Fund found that for every dollar of uncompensated care costs those states had in 2013, the health law had erased 40 cents by 2015, or a total of $6.2 billion.

The health insurance industry would be upended by the elimination of A.C.A. requirements. Insurers in many markets could again deny coverage or charge higher premiums to people with pre-existing medical conditions, and they could charge higher rates to women. States could still regulate insurance, but consumers would see more variation from state to state. Insurers would also probably see lower revenues and fewer members in the plans they operate in the individual market and for state Medicaid programs.

1,000 CALORIES
Menu labels are among dozens of the law’s provisions that are less well known.

It requires many employers to provide “reasonable break time” and a private space for nursing mothers to pump breast milk.

It created a pathway for federal approval of biosimilars, which are near-copies of biologic drugs, made from living cells.