To their slight credit, the people involved with promoting and approving this drug are aware of the value of its illegal distribution, but far too little is apparently to be done to prevent it from happening.

This approach to depression is only to be used when all others have failed. It’s so strong and dangerous that those using it should be overseen for two hours afterwards. Is this going to keep shipments of it from being highjacked and sold when the effects can be so huge? Of course not. 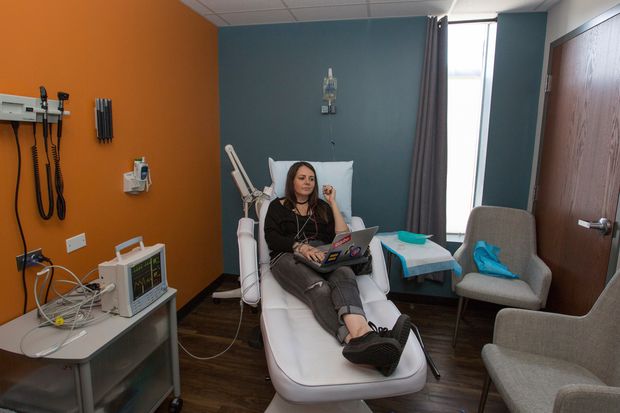 The Food and Drug Administration approved a controversial drug for depression Tuesday that could be the first of a long-awaited wave of new treatments, but has also raised concerns about abuse.

The drug, a nasal spray that manufacturer Johnson & Johnson JNJ -0.13% has branded Spravato, is a close chemical relation to ketamine, an anesthetic that is known for its heady effects on the brain. It is often abused as a party drug with the nickname “Special K,” but it has also been shown in studies to have a fast-acting impact on depression symptoms.

The FDA approved use of Spravato, to be taken with another antidepressant such as Zoloft, for patients with “treatment-resistant” depression, meaning they have been unable to find relief from at least two treatments. The approval comes despite mixed results in clinical testing, and the agency said Tuesday that because of safety concerns, the drug will be available only through a restricted distribution system. The FDA also said it must be administered in a certified medical office where the health-care provider can monitor the patient.

Spravato is one part of a renaissance in the development of new and better treatments for depression, a crippling condition treated mostly with drugs that are decades old. J&J estimates about three million to five million Americans suffer from treatment-resistant depression. No significant new class of drugs has come on the market for depression in decades.

The discovery that ketamine can help ease symptoms of depression—and within hours, rather than the weeks required for antidepressants such as Prozac or Zoloft—has shaken up the field of psychiatry. Ketamine targets a different receptor in the brain and appears to have a more direct effect than those drugs.

“It really has opened up a whole new way of thinking about depression,” Gerard Sanacora, professor of psychiatry at Yale University School of Medicine and director of the Yale Depression Research Program, said of ketamine. Dr. Sanacora was an investigator on some of J&J’s clinical trials of Spravato.

But use of ketamine and related compounds must be monitored closely, Dr. Sanacora said, to prevent supplies from being diverted and sold on the street. For the past few years, ketamine has been administered to some patients off-label intravenously. The new product will be much more portable as a nasal spray.

The drug had mixed results in clinical testing. Spravato, also known as esketamine, improved depression in two late-stage studies compared with placebo. But the drug fared no better than placebo in two others. A fifth study designed to assess safety in up to one year of use found that the most common adverse events were dizziness, dissociation, nausea and headache.

Julie Zito, a professor of pharmacy and psychiatry at the University of Maryland, Baltimore, said more research should be conducted to evaluate the drug in clinics in an ordinary community setting, rather than under study conditions. She is one of two members of an FDA advisory panel who voted last month against approval of Spravato.

The FDA is requiring the drug’s prescribing label to carry a prominent warning about the risks of sedation and suicidal thoughts and behaviors after administration of the drug.

J&J expects the Drug Enforcement Administration to classify Spravato, like ketamine, as a Schedule III drug, deemed as having a low to moderate potential for dependence. Other examples of Schedule III drugs are anabolic steroids and certain doses of codeine.

J&J said Spravato will cost between $590 and $885 per treatment session, depending on the dose. For the standard regimen, that will amount to $4,720 to $6,785 for the first month, and about $2,360 to $3,540 a month thereafter. Dr. Manji said the company expects most insurance plans to pay for the drug. Patients currently pay hundreds of dollars for a ketamine infusion. 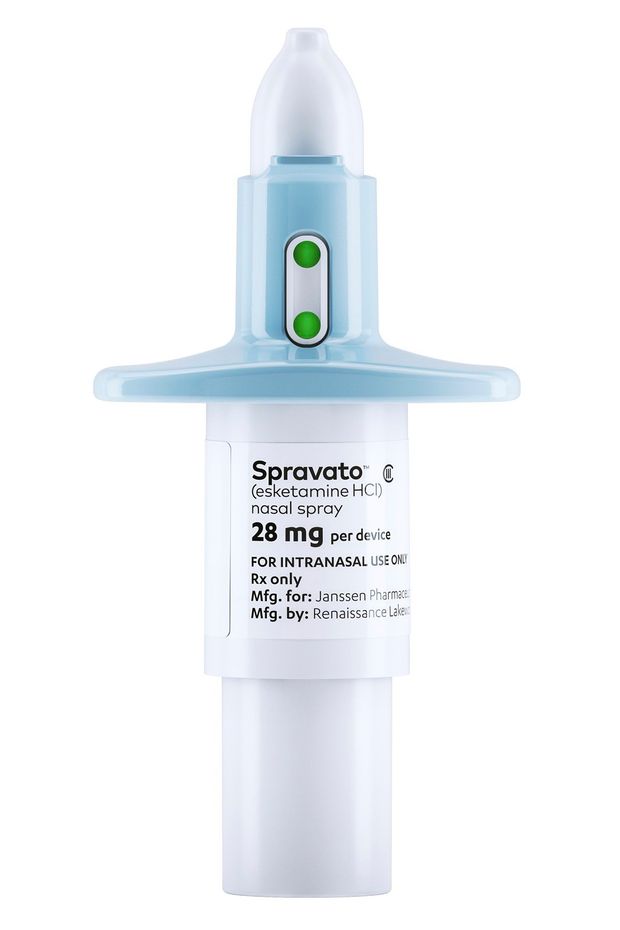 The FDA-approved medication, Spravato, will be used as a nasal spray in combination with another antidepressant. PHOTO: JANSSEN GLOBAL SERVICES/ASSOCIATED PRESS

As an anesthetic, ketamine is used in operating and emergency rooms on children, as well as by veterinarians.

Ketamine and its chemical cousins act in a different way than selective serotonin reuptake inhibitors, the class of drugs that includes Prozac. Ketamine targets glutamate, the most abundant chemical messenger in the brain, which carries signals between brain cells.

At lower, or subanesthetic doses used to treat depression, ketamine causes people to feel detached from reality, altering their senses or making them feel spacey. Some people have hallucinations, though these are rare, psychiatrists say. Those effects wear off after the drug is administered, while the chemical changes it induces relieve depression symptoms.

J&J made Spravato in nasal-spray form because it gets to the brain more quickly than an oral formulation, and without the need for an anesthesiologist with an IV, Dr. Manji said. Patients will be expected to remain at the doctor’s office after dosing to be monitored for side effects like heightened blood pressure and dissociation, which usually vanish within two hours.

Steven Levine, founder and chief medical officer of Actify Neurotherapies, which offers ketamine infusions at clinics across the country, said J&J’s nasal spray could appeal to people who have been put off by ketamine’s reputation or who haven’t been able to afford the infusions. “Those who have been scared off by the ketamine baggage will find this more approachable,” he said.

He said he would continue to offer infusions, because some payers may set stricter qualifications for coverage of the new drug.

Gene Stull gets about three ketamine infusions a month at an Actify Neurotherapies clinic in Princeton, N.J., paying $450 out of pocket for each session.

The treatment, which he has been getting for three years, is worth it, said the 73-year-old retiree. Multiple other depression medications had failed to lift a “black cloud” of despair.

On each visit, he sits in a reclining chair, listens to country music and visualizes black water rushing straight up out of his head. He thinks of it as the ketamine “washing the depression out of my head,” he said.

The experience is “bizarre,” but good, he said. “It’s not creepy or anything.” He wants to try the nasal spray, which he hopes Medicare will cover.

Allergan PLC is also developing a quick-acting antidepressant, called rapastinel, which also targets the NMDA receptor. Results from late-stage trials of the drug, which would be administered once a week intravenously, are expected soon, the company said.

The market for drugs targeting the NMDA receptor is estimated to reach $2 billion by 2025 and $3 billion by 2030, according to research by analysts at Sanford C. Bernstein & Co.

Sage Therapeutics Inc. has applied for U.S. regulatory approval for another rapid-acting drug—albeit with a different mechanism—as a treatment for women with postpartum depression. The treatment, which Sage plans to brand Zulresso, is given as an IV infusion over 60 hours in a hospital or clinic.

The long infusion, together with a cost that Sage has said could be up to $35,000 per course of therapy, could limit the drug’s appeal to patients and insurers.

Sage CEO Jeff Jonas said the drug’s rapid activity addresses a pressing need for patients, and it is not an ongoing, chronic therapy. An FDA decision is expected by March 19.

Write to Betsy McKay at betsy.mckay@wsj.com and Peter Loftus at peter.loftus@wsj.com