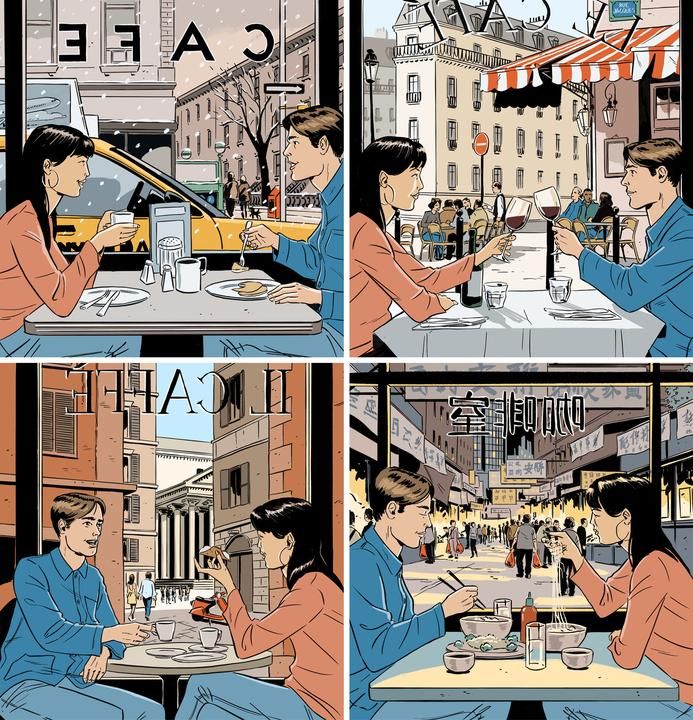 EAT AWAY Not every traveler hungers for the hottest new dining spot. Even on vacation, a lot of us prefer humble haunts beloved by locals. ILLUSTRATION: JACK RICHARDSON
37 COMMENTS
By
Tara Isabella Burton

A BOOTH in a Midtown Manhattan restaurant has a small plaque with my grandmother’s name on it, just a few feet beneath a giant plaster breast. For more than a quarter-century, my grandmother, my mother, and I had our regular Sunday lunches at Trattoria Dell’Arte, the 30-year-old Italian restaurant—known for its larger-than-life artistic renderings of various body parts—just across the street from Carnegie Hall.

I became a regular at a young age. When my mother was pregnant with me, my grandmother would bring her heaping takeout containers from the restaurant’s antipasto bar, assuaging her cravings for broccoli rabe and Sicilian carrots. Like many New Yorkers, my grandmother rarely cooked; the oven in her compact apartment was used primarily for storing shoes. Plus, neither my grandmother nor my mother had the space or inclination to entertain at home. So Trattoria—around the corner from my grandmother’s apartment—became our de facto living room. For 25 years, we three would spend most Sundays at the booth under the giant breast. We’d eat. We’d fight. We’d pretend not to gawk at celebrities—Isabella Rossellini and Goldie Hawn were regulars.

Won’t You Be My Neighborhood Restaurant? 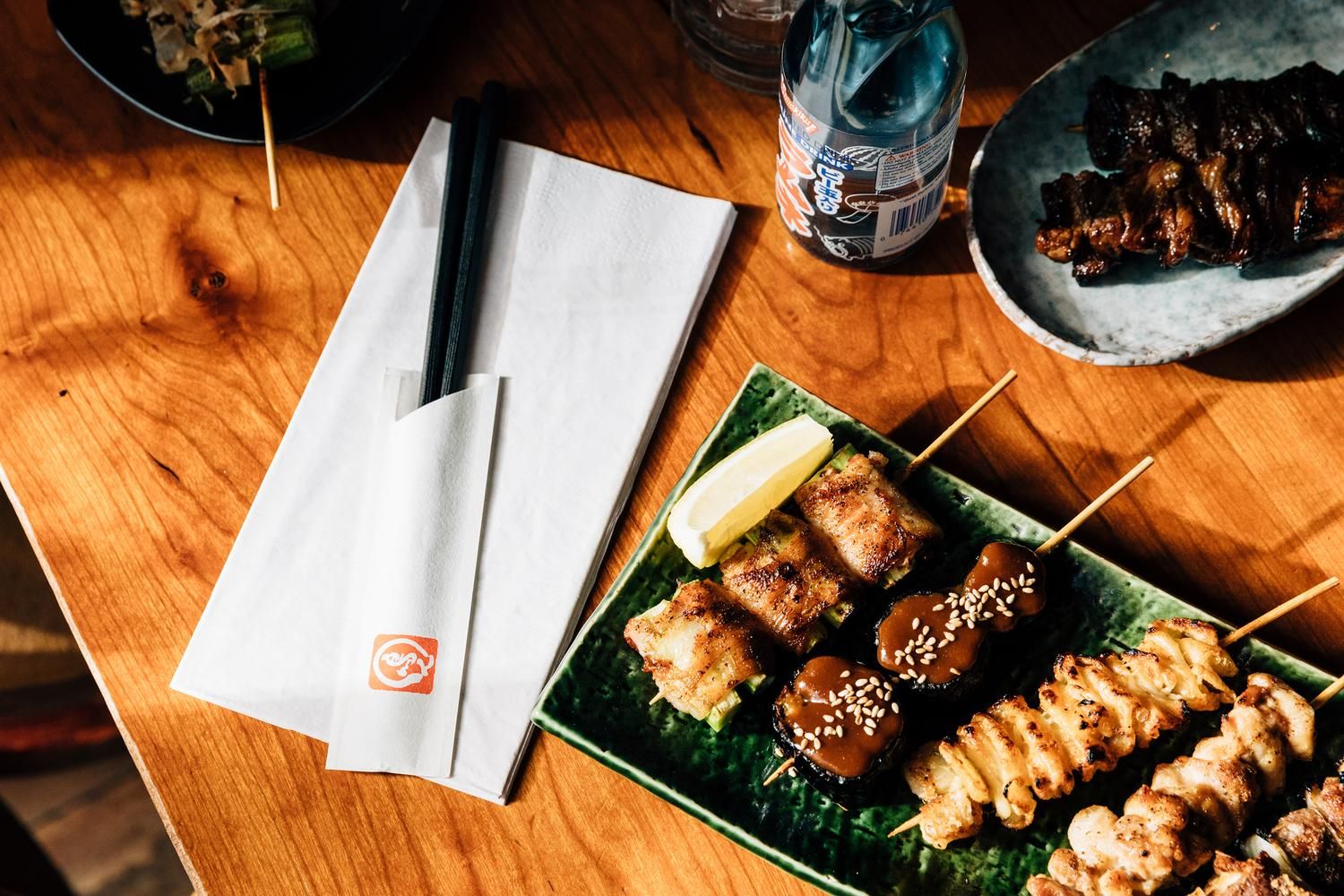 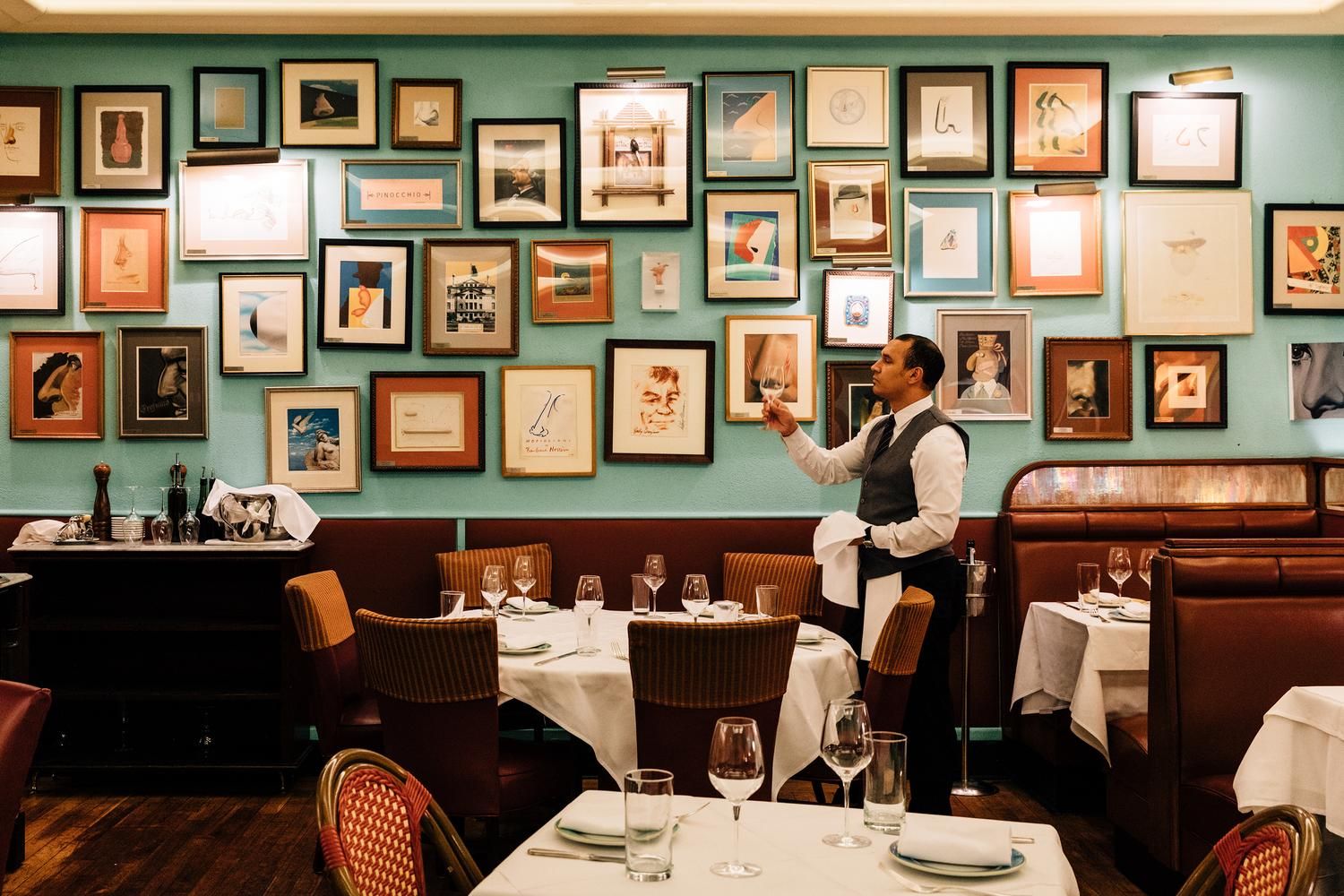 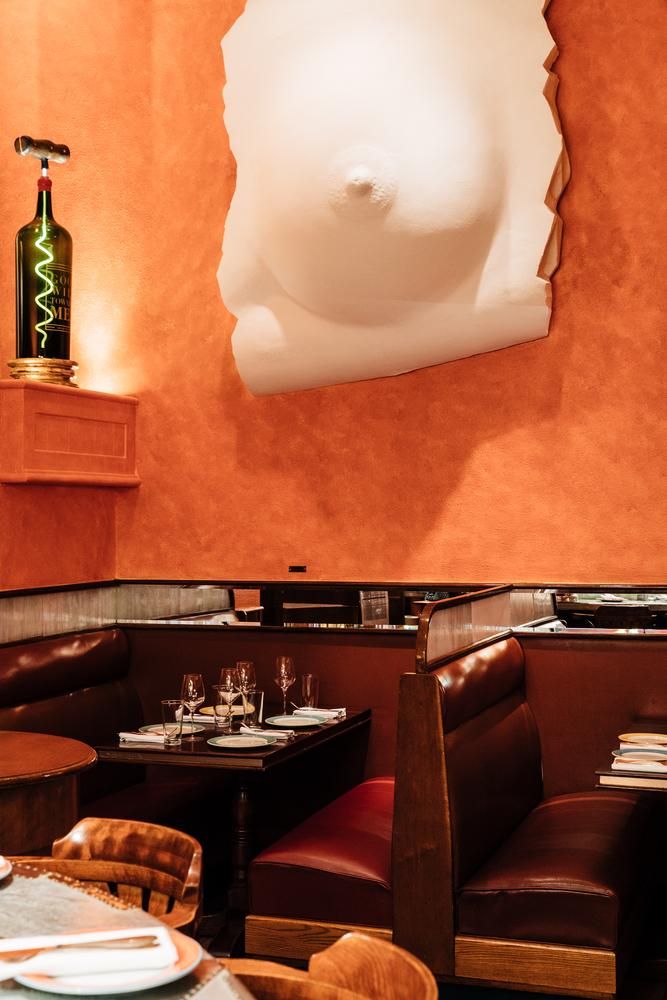 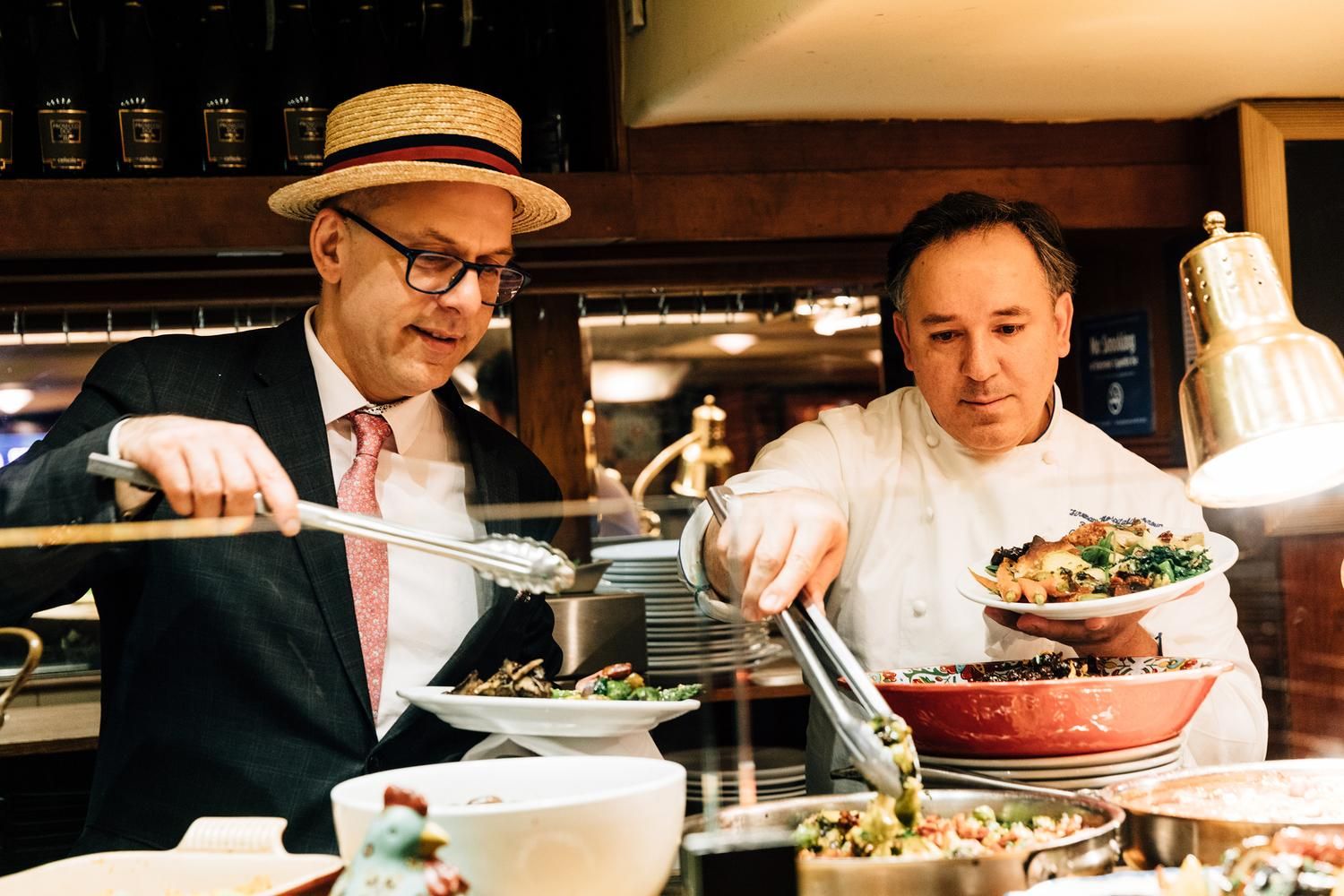 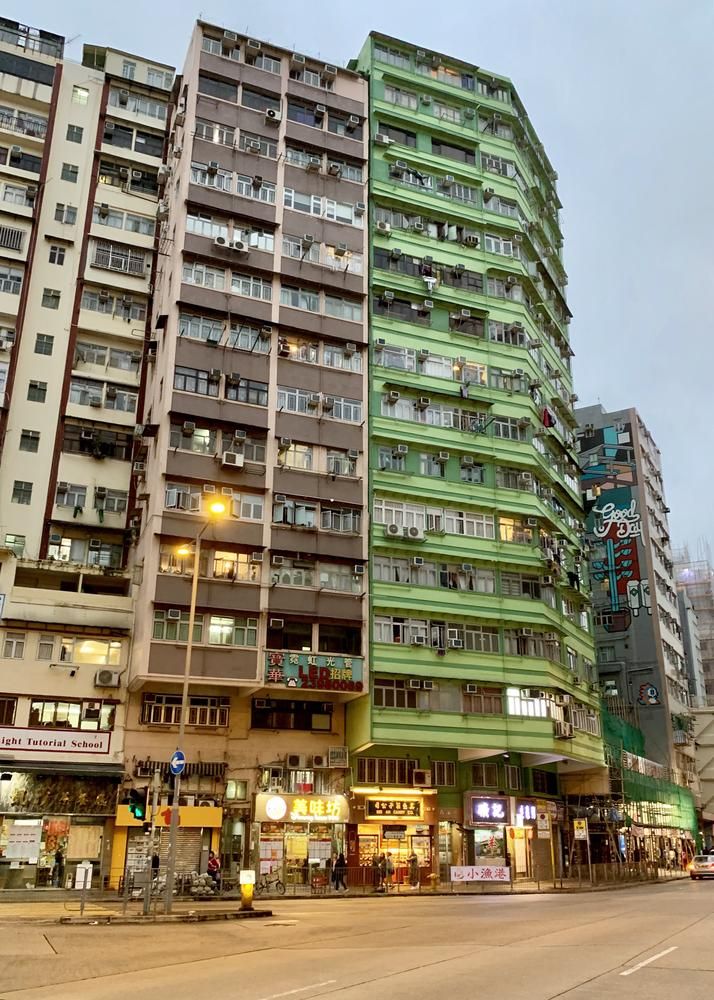 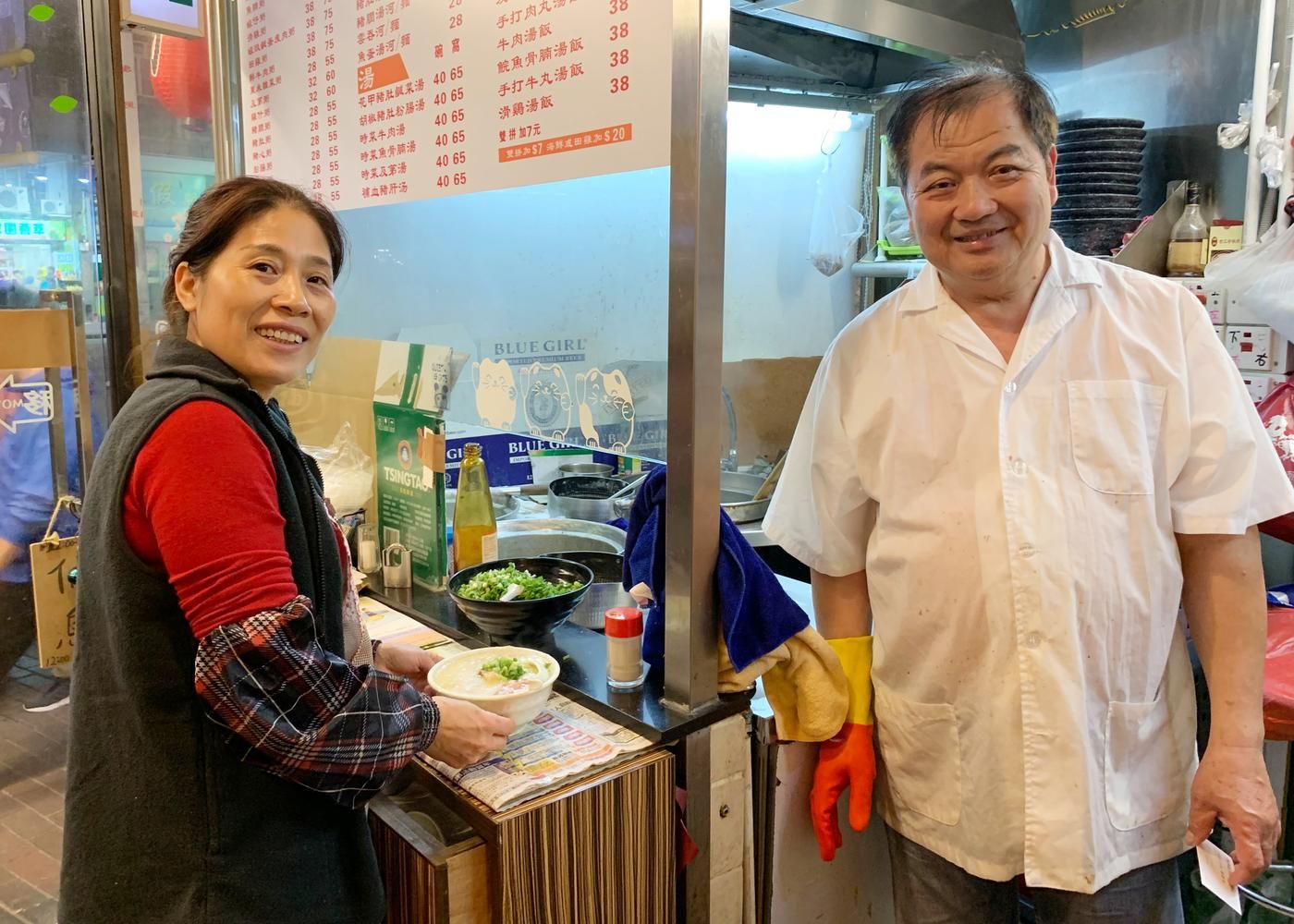 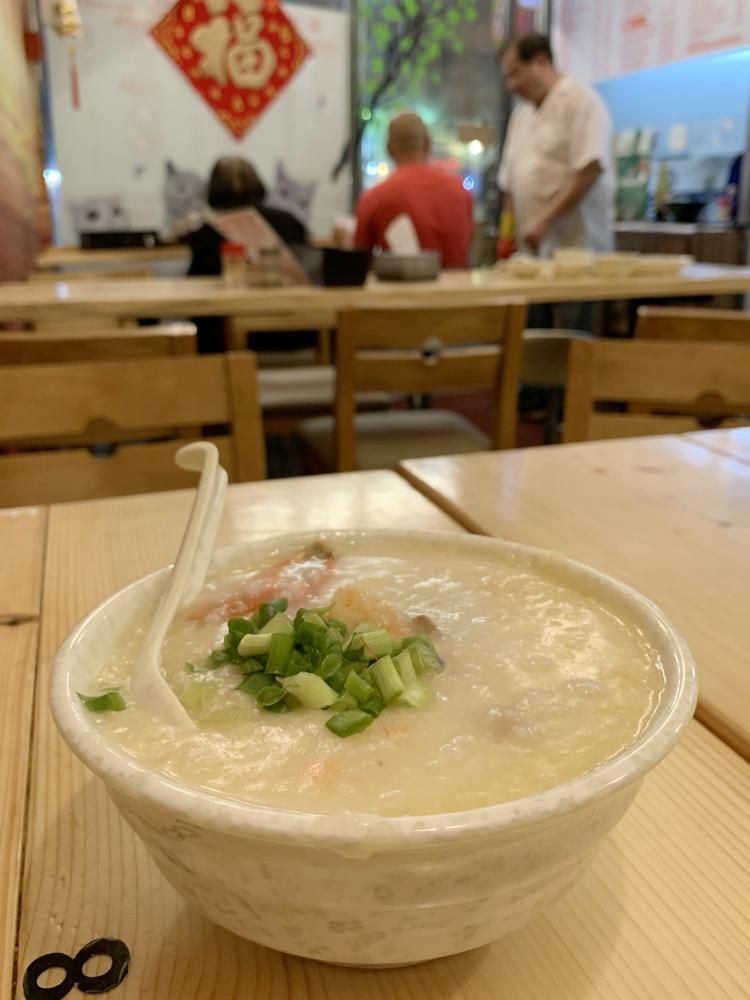 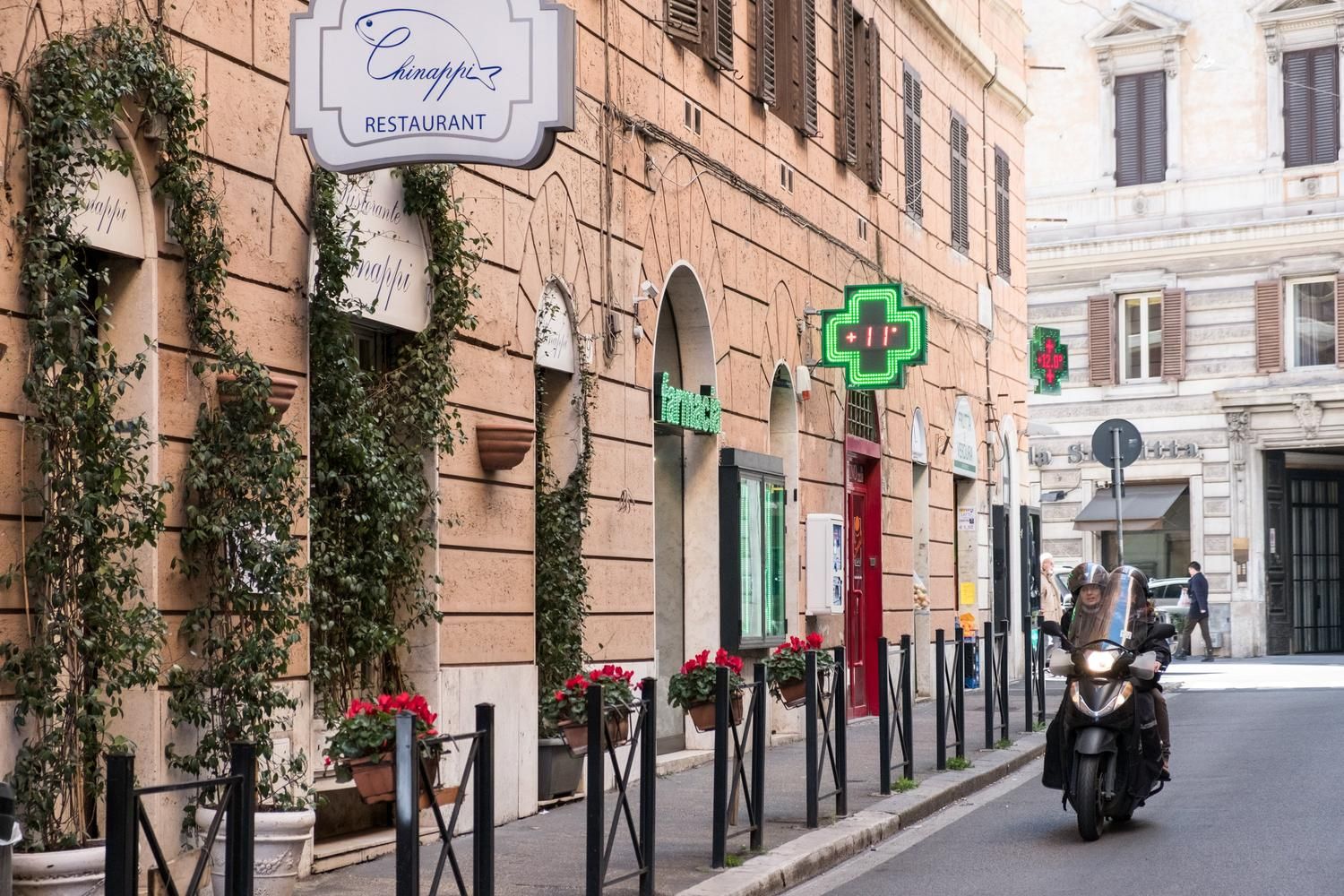 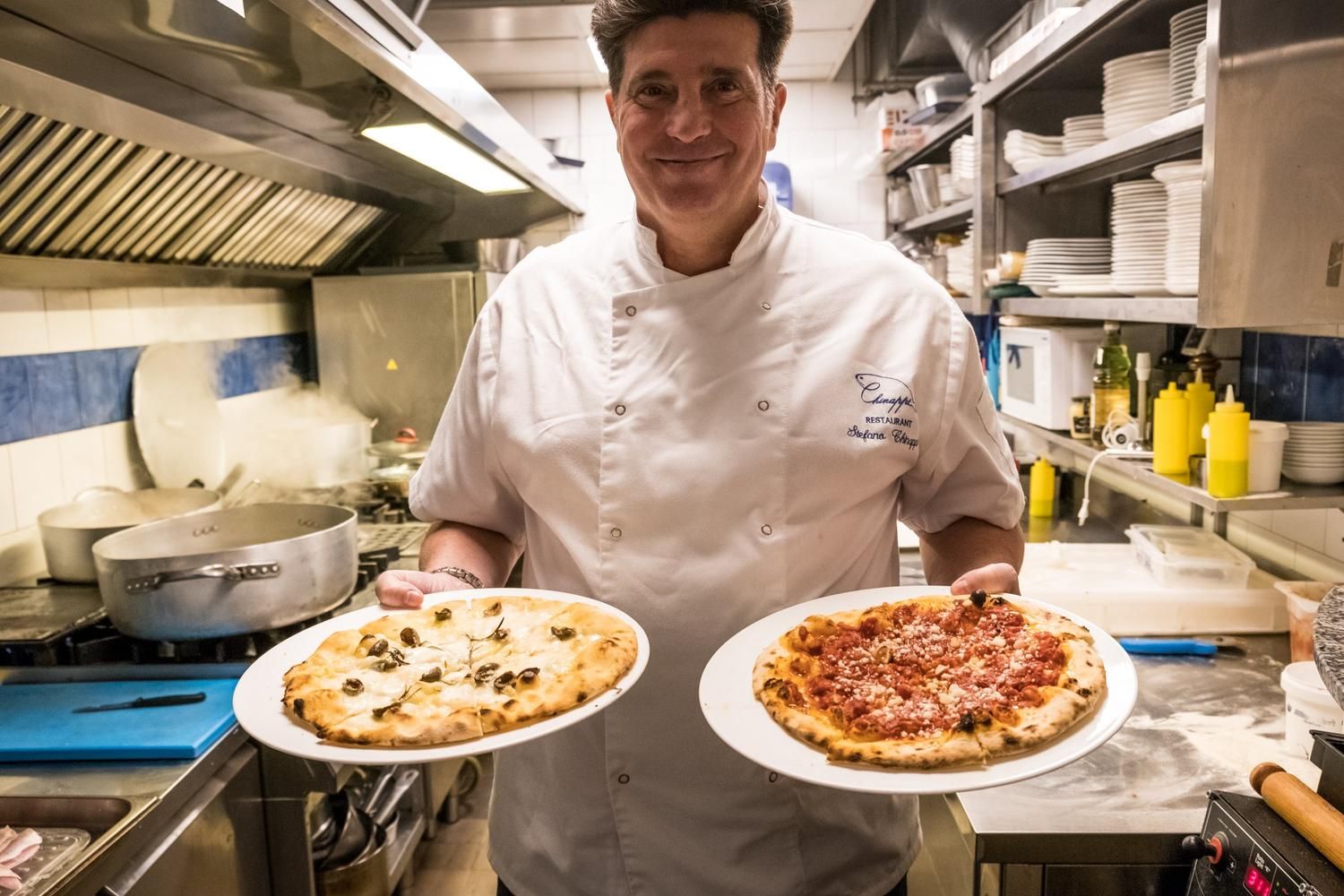 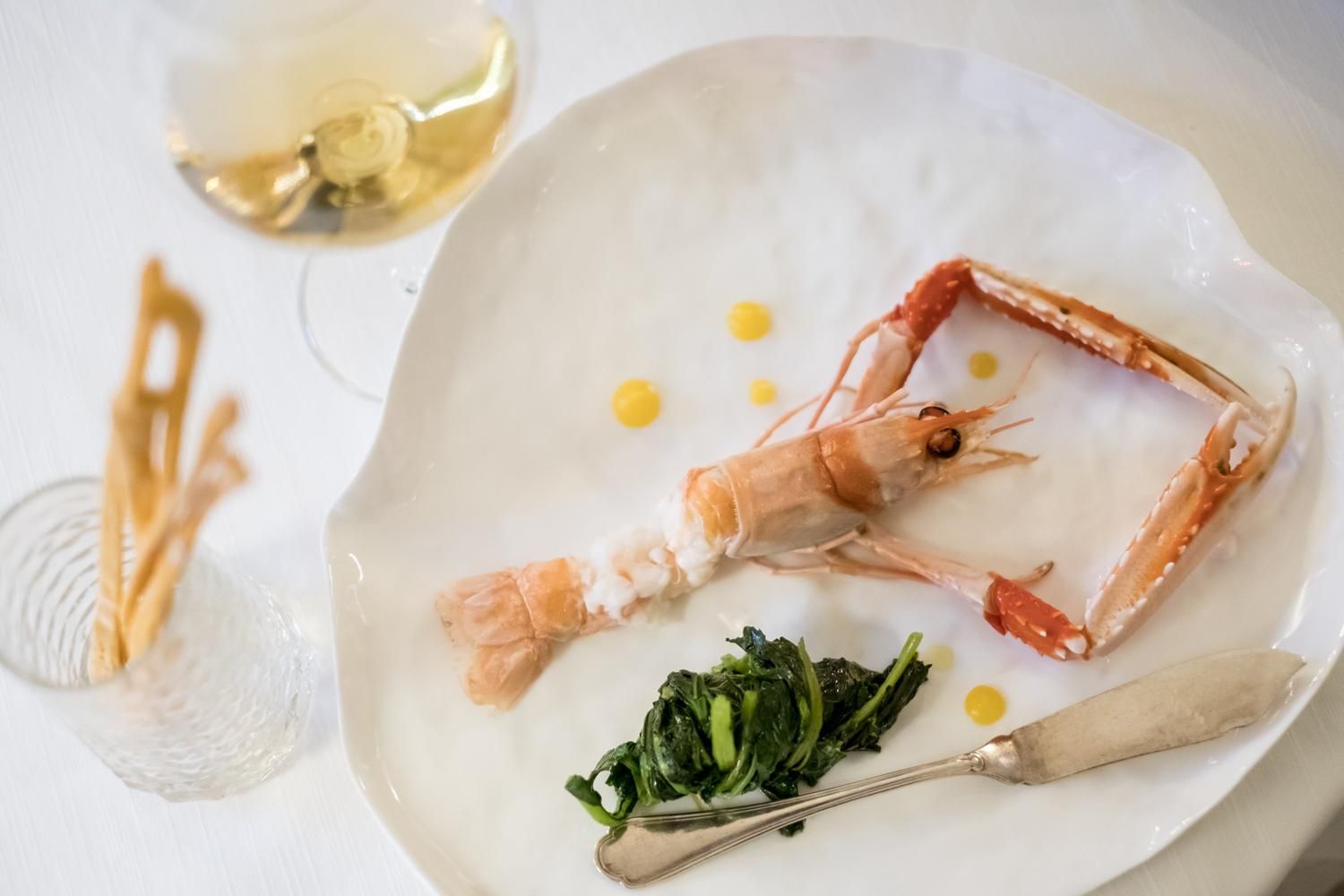 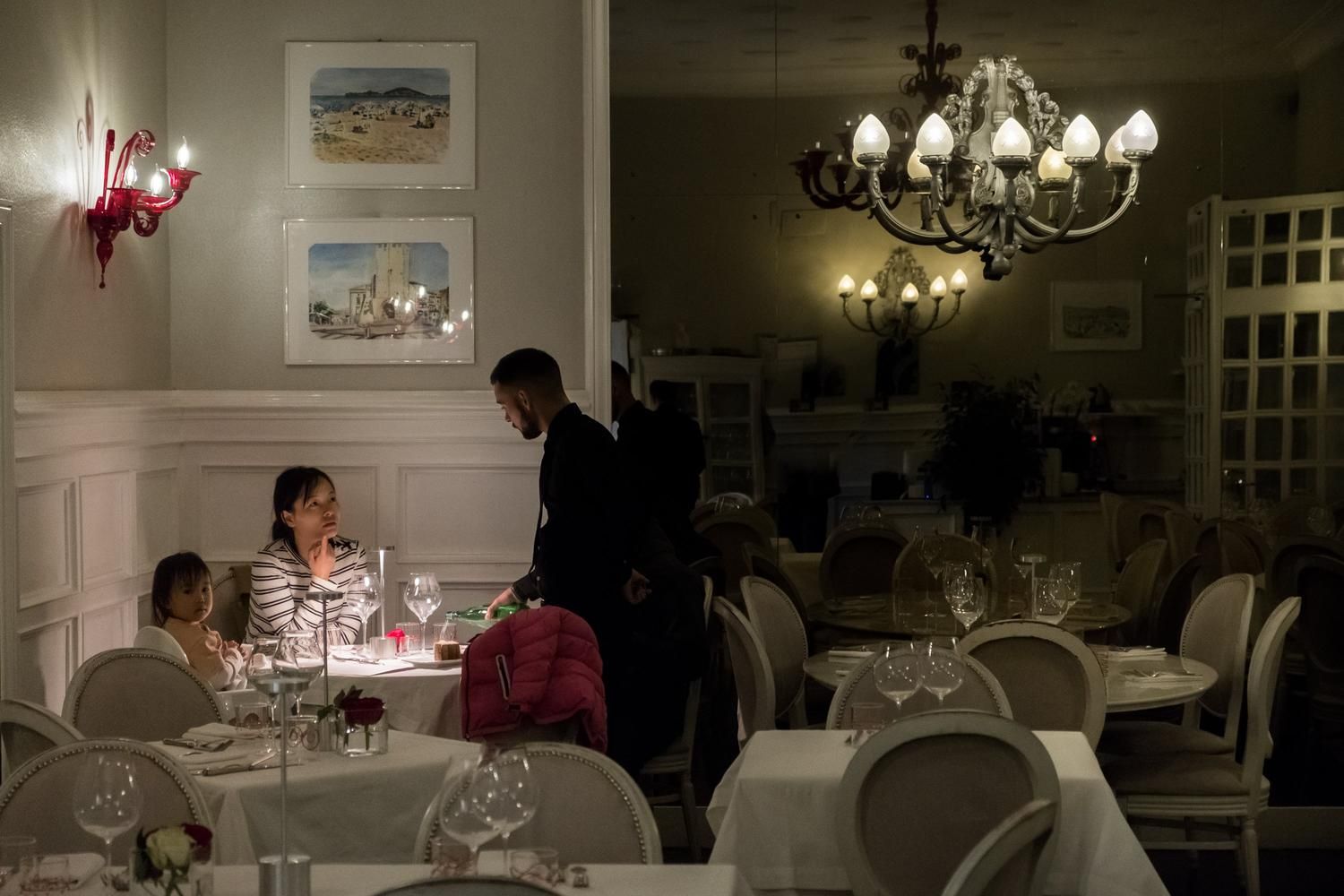 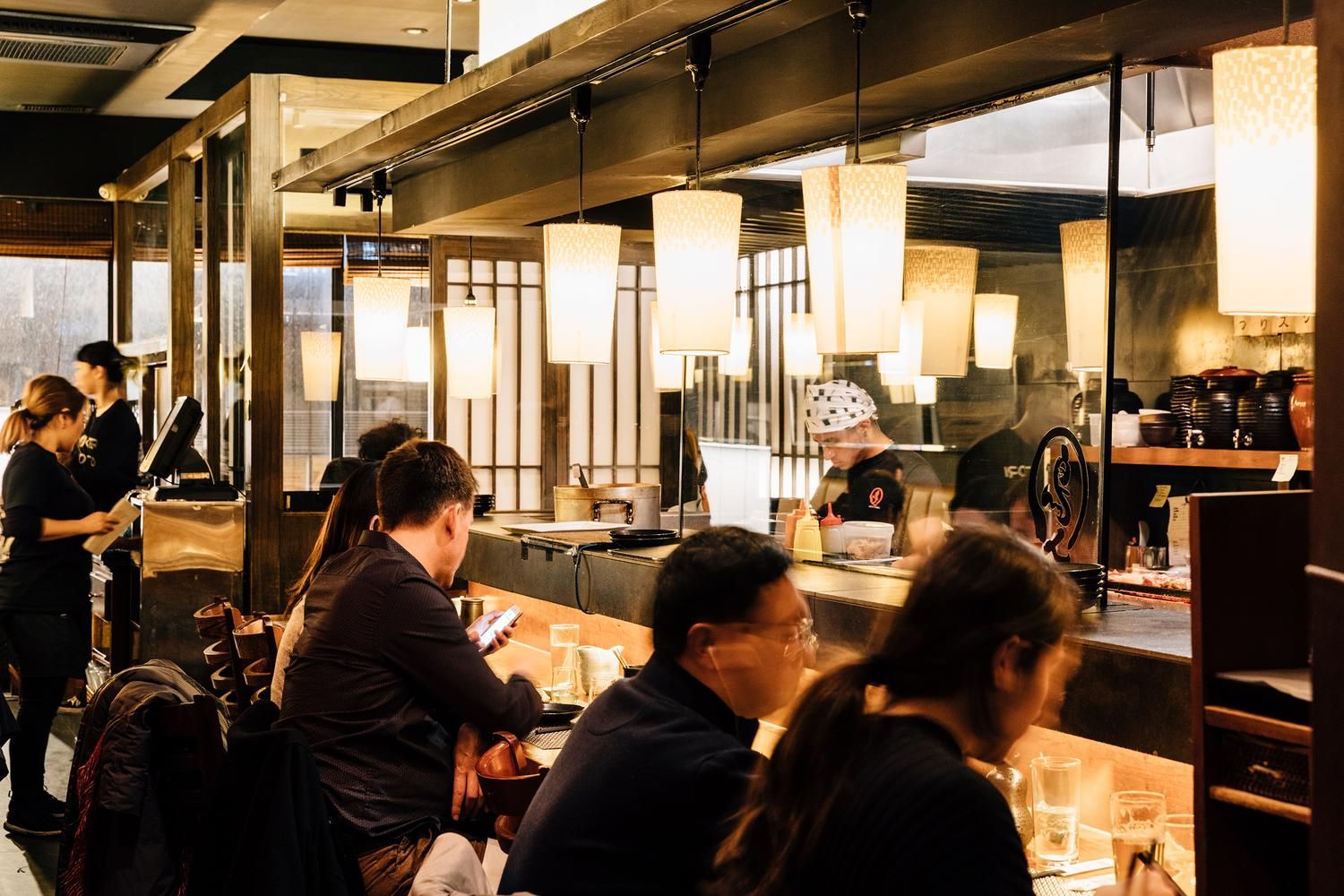 My grandmother would order too much snapper livornese and heap some onto my mother’s plate, and my mother—always on a diet—would heap it back on to hers. One of them would get irritable over something unimportant and threaten to pay the bill and walk out. Nobody ever did. We went before the theater. We went before the movies. We went after my grandmother’s chemotherapy when she was too sick and too weak to walk anywhere else. We went the day that she died. We walked around the corner and drank in silence and waited for the world to tell us what to do next. The staff all hugged us.

Trattoria had been my grandmother’s home. After her death, I began to make the place mine. I took boyfriends there. One of them broke up with me there, at the bar, and although the manager, Brandon Fay, never appeared to eavesdrop, my glass of Prosecco remained comfortingly full throughout the harrowing, hourlong conversation.

Traveling outside of New York, no matter where I happen to be, from Paris to Tbilisi to Tehran, I’ve always found myself more drawn to the Trattorias of the world. I seek out cozy, unpretentious places withwhich I can build a relationship, rather than the restaurants with star chefs and social-media buzz.

‘Restaurants like these make a city come alive in the way no monument or museum could.’

As a solo traveler, in particular, I often find myself going back to the same set of cafes in each city: the Venetian cicchetti bar where I made conversation over Italian tapas with an elderly former gondolier, the seaside Slovenian restaurant where I dined so often that the waiter began to joke that we were engaged, the Paris bistro on the Ile Saint-Louis where the waitresses morphed from hostile to grudgingly tolerant to downright friendly over the course of a weekend. Unlike formal restaurants known exclusively for fine dining, local haunts often become a nexus of an entire community. Neighborhood regulars come weekly or even nightly; waiters know every diner’s name, if not their entire life history.

Restaurants like these often form the heart of my experiences of a place, making a city come alive in the way no touristic monument or museum or upscale dining phenomenon of the moment can. A town that I first approach as a stranger will, after a few days’ breakfasting at the same spot, start to feel inexorably like home. When I chat with waiters, develop a daily “usual” order, take notes on the same crowd of people gathered at the booth or table next to me (the best part of places like these is, almost invariably, the people-watching), I am no longer fully an outsider. 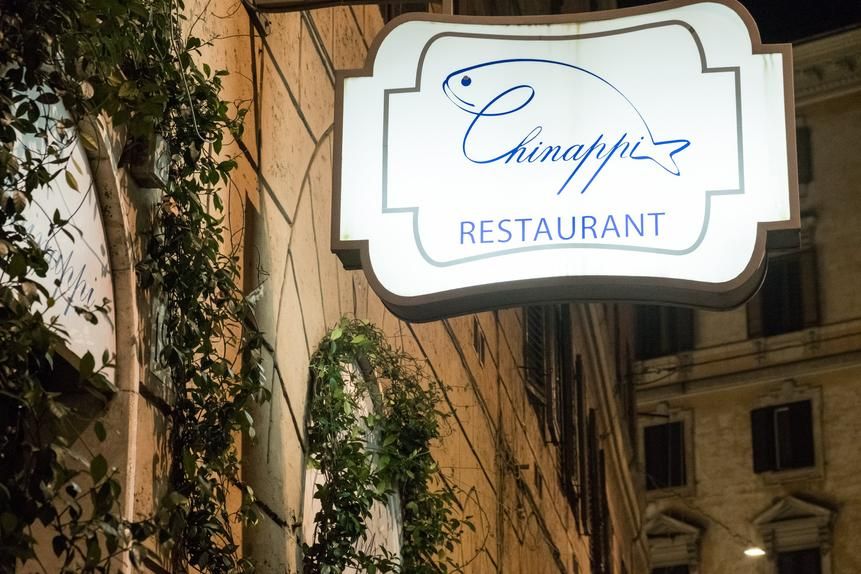 Sometimes I keep in touch with waiters on Facebook or Instagram, and sometimes I return to a long-favorite cafe in Tbilisi or Trieste or Rome with no contact in the intervening time, only to have the owner embrace me as an old friend. I’m far from the only traveler to forge these kind of relationships. A friend, Daniel Lelchuck, a cellist with the Louisiana Philharmonic Orchestra, says that when he travels for concerts he too tries to frequent one spot. “I find a coffee shop that I can temporarily call ‘mine’ and go regularly. Developing a rapport, even if transient, with the regular clientele and the staff is marvelous, all the more so if they (or even I, too?) become convinced that I’m a true regular,” he told me.

Of course, nowhere quite compares to Trattoria Dell’Arte for me. Last year, Mr. Fay interrupted a promising first date I was on to tell me that he was leaving Trattoria, starting his own place just over the road under Columbus Circle. I cried. We hugged. Mr. Fay sent over glass after glass of Prosecco, extra antipasti, a plate of cannoli. We’d spent 18 years together, after all. He made my date—who had known me about three hours—promise to take good care of me. “She has family here,” Mr. Fay told him. My date paid attention. We’re planning our rehearsal dinner at Trattoria Dell’Arte now. 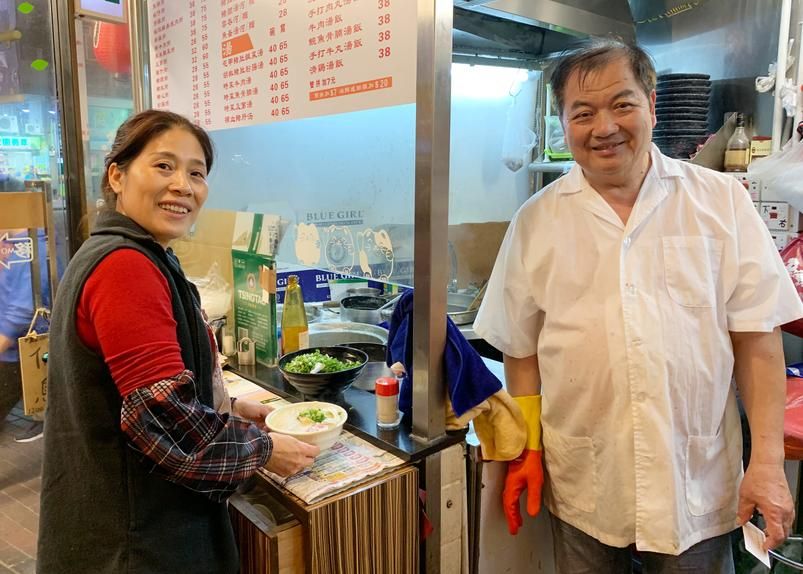 “Kwong Kee Congee in the Prince Edward neighborhood is a hole-in-the-wall restaurant owned and operated by a married couple. There are no English menus, and they are only open from 2 p.m. until 1 a.m. Congee, of course, is one of their signatures, and they take time to source the best local ingredients all around Hong Kong. The fish heads they use to make their congee weigh 5 pounds each.” 123B Lai Chi Kok Rd.., Kowloon, 852-5988-5763

“One secret spot I enjoy visiting often is Yakitori Totto. They serve delicious Japanese food like chicken oysters and shishitos (my favorites!), and it’s a great place to grab a seat at the counter and watch the guys at work, an experience that will truly make you feel like you’re in Tokyo. Only a few blocks away from Le Bernardin, it’s a perfect place to go after a night in the kitchen!” 251 W. 55th St., tottonyc.com 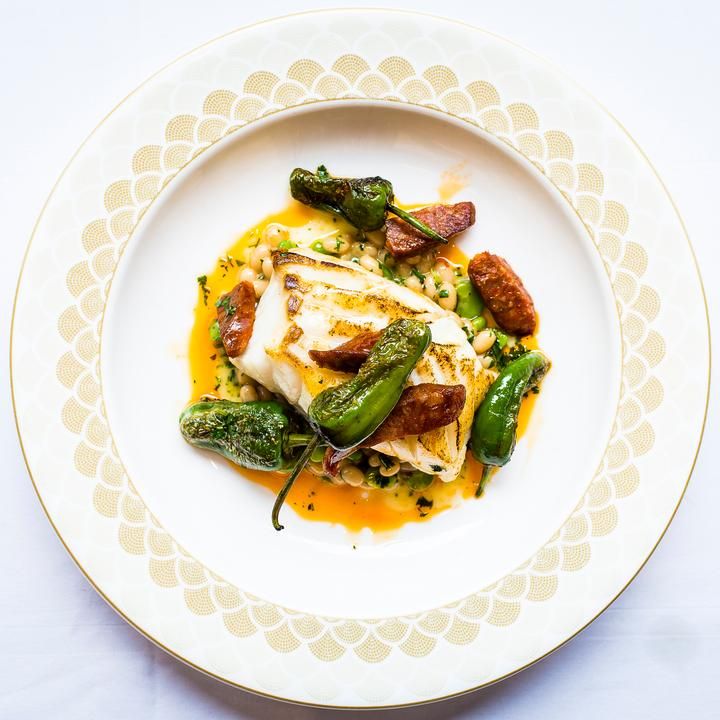 “My favorite local haunt is Silk Road, which resides at the bottom of my road in the Camberwell neighborhood. The place does straight-up delicious, quick-fire Chinese cuisine with flavor references to the northeastern region of China, Xinjiang. The food is spicy, with hints of aromatics like cumin, charcoaled skewers of lamb fat and kidneys grilled over coals, linking the dishes to their Turkic origin. Their best dish is the ‘home style cabbage’—maybe one of the best dishes in London. It’s made with a sweet dressing and smoky chiles, and it’s simple but incredible when it’s hot and fresh out of the wok. The clientele is a mix of bohemian types and art student hipsters with the occasional mainland Chinese student. I’ve seen half a dozen Michelin-star chefs traveling to Camberwell to eat here.” 49 Camberwell Church St. 44-20-7703-4832

“Scott’s in Mayfair has been around forever. There’s no hype but it’s always packed, and their talented chefs do great food. I like to order dover sole, new potatoes and a nice bottle of wine.” 20 Mount St., scotts-restaurant.com

“My favorite restaurant is Chinappi. I really feel at home there and often go with my whole family. My favorite dish is the fantastic spaghetti with clams, and my children love the Chinappi sole. Recently, the Chinappi family bought a big pizza oven. In my opinion, this is the best pizza! My favorite is the crispy white pizza with rosemary, black Gaeta olives and buffalo mozzarella.” 19 Via Valenziani, chinappi.it/en 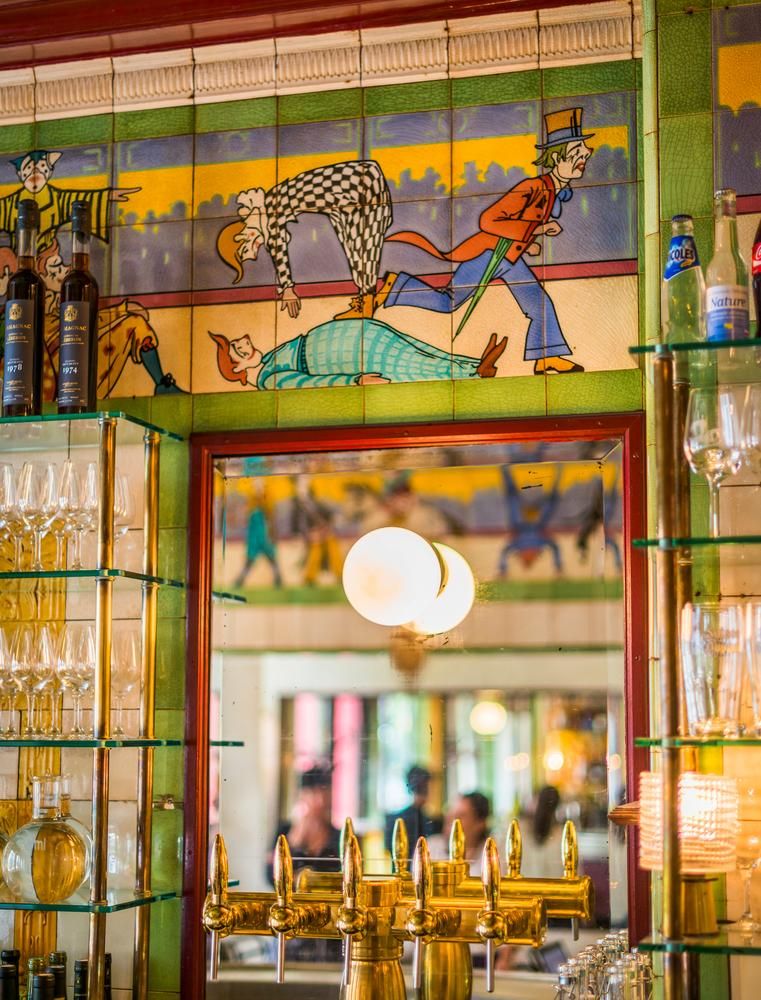 “Restaurant Plume in the 7th arrondissement is a typical French bistro opened by a chef with a gastronomic profile. It’s intimate and elegant, with just 25 wooden chairs and Parisian floor tiles. The cuisine is fantastic, all made with amazing products, and it’s a great value.” 24 Rue Pierre-Leroux, restaurantplume.com

“I love Clown Bar for its original take on art- deco décor, very good cuisine, well-chosen natural wines and affable staff. It’s where you can pass a wonderful evening eating a high-quality meal in an informal atmosphere.” 114 Rue Amelot, clown-bar-paris.com

“Cala is probably the restaurant I frequent most in the city. I love the design and dining either at the bar or seated. Without gushing, their cocktails are fabulous, and they have an amazing selection of tequila and mescal. Of the dishes, I highly recommend the whole roasted fish and California sea urchin tostada (149 Fell St., calarestaurant.com) For something a little more under-the-radar, I’m a big fan of Han il Kwan. It’s my go-to Korean place, where you can cook spicy pork, short ribs and shrimp at the table. Dol sot bibimbap is one of my favorite dishes, and theirs does not disappoint whatsoever.” 1802 Balboa St.,hanilkwan.org

“Mizutaki Kojiro in Tamachi specializes in chicken hot pot. There is a gas burner on the table to which the waiter brings a pot with superrich chicken broth and throughout the evening adds chicken legs, chicken meatballs (delicious!) and vegetables. There are also lots of appetizers, beer, sake, wine and shochu. Reservations recommended.” 1-14-17 Shibaura, 81 3-6435-4840

How to Be a Restaurant Sleuth

A devoted diner serves up tips on finding local spots anywhere you go. 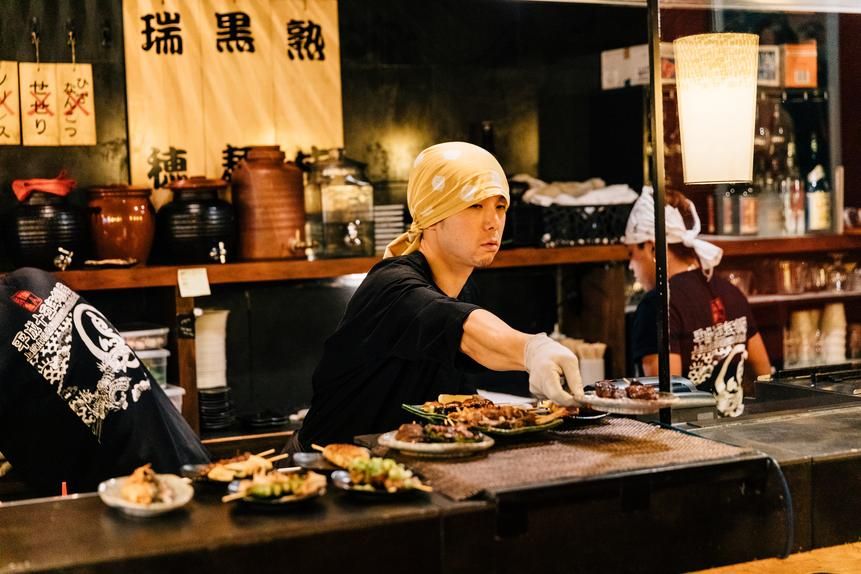 MOST OF THE TIME, I’m the one who’s doling out the advice about where to find a great restaurant that only the locals know about. This is because I’m a food writer who has lived in Paris for the last 30 years, enough time to have explored every one of the French capital’s 20 arrondissements in search of those under-the-radar places with great food and wine, easygoing prices and a lot of atmosphere. But I travel a lot, too, so I’ve learned how to ferret out a really good meal like the ones in the restaurants I recommend in Paris. Here are four near-foolproof ways to find a memorable meal:

Chat up the locals. Ask absolutely everyone where you should eat. I owe the best meal I’ve ever eaten in Sicily—in a secretive, second-floor, pine-paneled dining room where all the men wore dark suits and had body guards—to a suggestion from the guy who sold me a pound of salted capers in the market in Catania. Sadly, the restaurant no longer exists.

Tour local markets—and ask the vendors where they eat. In the markets, you’ll also see what’s in season, and once you know, look for it on restaurant menus.

Read the local food and restaurant blogs. These are almost invariably the best sources of insider information, though unsurprisingly not all blogs are reliable. Among my favorites: Oslo-based Anders Husa’s Foodie Stories (andershusa.com) for guidance in major Scandinavian cities, Rome-based American expat Katie Parla’s Italian recommendations (katieparla.com) and Singaporean Daniel Ang’s regional suggestions (danielfooddiary.com). Some cooking schools, such as La Cuisine in Paris, post restaurant recommendations on their blogs, too (lacuisineparis.com). I’ve also been known to troll Instagram looking for options. Simply using the hashtag #mexicocityrestaurants led me to the excellent Máximo Bistrot the last time I was there.

Finally, ask your hotel concierge for an idea or two, but only after you’ve done a little research. Concierges often respond best to informed requests because it lets them shine. By questioning a pro about the places you’ve unearthed, you’ll identify yourself as someone savvy—or fanatic—about eating well, which might be rewarded with an address from his or her personal black book.