Concrete is a building supply used in huge quantities. Surprisingly enough, its curing process is quite the producer of greenhouse gases. If we’re unwilling to stop using it, we need to at least make it more expensive. This is only one of a series of Guardian articles about concrete and its effect on the environment.

Tucked away in volume three of the technical data for Britain’s £53bn high speed rail project is a table that shows 20m tonnes of concrete will have to be poured to build the requisite 105 miles of track, culverts, bridges and tunnels. It is enough, it has been calculated, to pave over the entire city of Manchester.

A more modest 3 million tonnes of concrete will be needed to construct the Hinckley B nuclear power station in Somerset, and the proposed new runway at Heathrow will require one million tonnes.

Cement, the key component of concrete and one of the most widely used manmade materials, is now the cornerstone of global construction. It has shaped the modern environment, but its production has a massive footprint that neither the industry nor governments have been willing to address.

Because of the heat needed to decompose rock and the natural chemical processes involved in making cement, every tonne made releases one tonne of C02, the main greenhouse warming gas.

Including the new Crossrail line through London, the building of Britain’s four largest current construction projects will, if completed, together emit more than 10m tonnes of CO2 – roughly the same amount as a city the size of Birmingham, or what 19 million Malawians emit in a year. 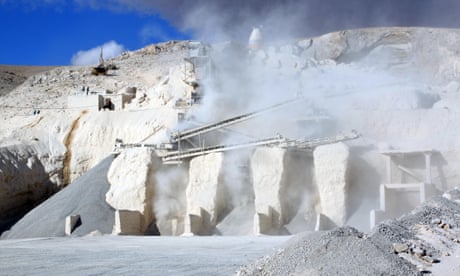 Concrete: the most destructive material on Earth

Nearly 6% of all UK greenhouse gas emissions, and up to 8% of the world’s, are now sourced from cement production. If it were a country, the cement industry would be the third largest in the world, its emissions behind only China and the US.

So great is its carbon footprint that unless it is transformed and made to adopt cleaner practices, the industry could, on its own, jeopardise the whole 2015 Paris agreement which aims to hold worldwide temperatures to a 2C increase. To bring it into line, the UN says its annual emissions need to fall about 16% in the next 10 years, and by far more in the future.

While some of the biggest cement companies have reduced the carbon intensity of their products by investing in more fuel-efficient kilns, most improvements gained have been overshadowed by the massive increase in global cement and concrete production. Population increases, the urban explosion in Asia and Africa, the need to build dams, roads and houses, as well as increases in personal wealth have stoked demand.

Industry leaders are now embarrassed, aware that they are in danger of being financially penalised and tarred as climate laggards

Annual cement production has quadrupled from nearly one billion to over 4 billion tonnes a year in 30 years. In the next decade it is expected to increase a further 500m tonnes a year. Unless there is a dramatic change, cement emissions are expected to continue to rise beyond 2050.

Industry leaders are now embarrassed, aware that they are in danger of being financially penalised and tarred as climate laggards who refuse to change in the face of the climate emergency. They well know that not only is it quite possible to build most structures safely without cement, but their own research has shown that green, cement-like products using recycled byproducts which are just as strong can be made from other industries, such as steel slag, fly ash from coal-fired facilities or some types of clay. Instead they trust that nascent technologies like carbon capture and storage which could allow emissions to be buried will come on stream, and that more efficient plant will reduce cement emissions by as much as 20-25%.

This is wishful-thinking. The great bulk of the industry is inherently conservative, ignorant of the alternatives to cement and reluctant to adopt change. Conventional, or Portland, cement is trusted to be safe and strong and developers continue to specify it because it is cheap and the alternatives are not well-known. Without major demonstration projects showing what is possible, and the education of architects and planners, progress will be incremental and possibly too late.

But technological change will not alone drive cement emissions down fast enough. What is needed to speed up cuts is a global cement, or concrete tax. Only if the whole industry is forced to pay far more for the emissions of its product will companies shift to cleaner practices.

A specific cement tax would fit well into the growing clamour for a simple revenue-neutral global carbon tax. These have been proposed and adopted on a limited basis for over 20 years, but the cement industry has strongly lobbied against them in Europe, the US, Canada and elsewhere.

The cement industry has transformed the world. But it now threatens to tip the environment into uncontrolled warming

Indeed, such is the industry’s influence that governments have not only been shy to adopt anything more than token restrictions, but have been encouraged to promote giant concrete-intensive projects like HS2 and massive road building programmes. In Europe, where an emissions trading scheme has repeatedly stuttered, carbon regulation on cement makers has perversely resulted in windfall profits for the industry and no emission cuts.

There are now at least 70 national and regional carbon tax schemes covering possibly 20% of all global emissions. Some, like those imposed in Norway, Sweden and Finland, are straight taxes; others, including California, the EU, China and South Korea, are emission-trading schemes which issue permits for industries to pollute. 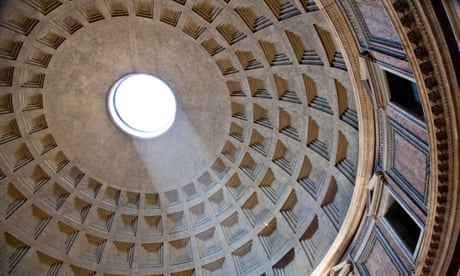 A brief history of concrete: from 10,000BC to 3D printed houses

The consensus is that the carbon in all these schemes is still priced way too low to drive change and to encourage fuel-intensive industries like cement to change practices. At best, the carbon schemes have encouraged cement makers and other big emitters to relocate to avoid charges.

Studies suggest that direct taxes not only cut emissions better than “cap and trade” schemes, but also raise more money. A high global cement tax, the theory goes, would concentrate industry’s minds and massively reduce demand for carbon-intensive cement, but any tax that raise energy prices would be very unpopular.

The solution, say some economists, is to make a cement or carbon tax “revenue neutral”, with money raised from industry returned to people in the form of tax rebates to offset any rise in energy bills, or used to specifically reduce other emissions. Where similar approaches have been used, as in Switzerland which has a tax on heating fuel, or New Zealand, high carbon taxes have proved both popular and effective.

The cement industry has transformed the world and enriched both itself and mankind. But it now threatens to tip the environment into uncontrolled warming. It’s now payback time and the industry must respond urgently to the problem it has helped to create.