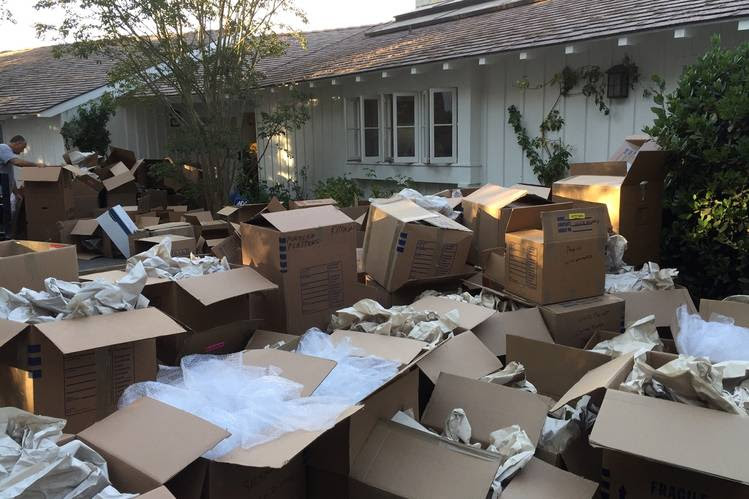 Moving after so many years can force you to confront every bad buying decision you ever made. PHOTO: KATHLEEN HUGHES

“What are you doing?” my husband asked after finding me at the kitchen island staring sadly at a massive collection of baking tools, shortly before Christmas.

I had spread out three muffin pans, two mini muffin pans, five pie tins in both metal and glass, and one Teflon-coated Bundt pan.

It’s a unique kind of personal reckoning: Moving out of your home after almost three decades can force you to confront every bad buying decision you ever made, your lack of organization, along with your bizarre outfit choices as you attempt to pack.

But I’m also in the process of finding that moving and downsizing can feel like one of the best decisions ever made, because it’s a chance to redefine yourself after years of feeling stuck and isolated in the suburban wilderness.

“Stop talking about changing your life and just do it,” said my 24-year-old daughter, Isabel, with typical practicality. “You can’t keep talking about this.”

Most of our fellow empty-nesters have already left our area, and our social life without children had disappeared. So spurred into action, we toured homes in Seal Beach, a much shorter work commute, and loved the first house we found. It seemed to be a mini version of our house—less than half the size—in a lively beach community. And the rent was way below our monthly mortgage payment.

My husband, exhausted by his commute, and perhaps my state of mind, quickly decided we should sign the lease and sell our house as soon as possible. “It’s more like us,” he said of Seal Beach. “It’s our people. It’s dress down and walk to the coffee shop. We’re interested in ideas, not things.”

But for two people who don’t consider themselves interested in things, the sheer act of packing—and tossing things—was now surprisingly daunting. The lease started in early January, but our progress was so slow that the rental sat empty, adding pressure.

Part of the problem was admittedly the walls of books in most rooms. I have hung on to my college books even though the pages long ago turned yellow. I have shelves of Fodor’s travel books, some for countries that now have different names. If I was finally going to reread “The Denial of Death,” I would get it on Kindle.

All closets, drawers and file cabinets seemed stuffed to capacity.

Instead of tossing out-of-date clothes, I had moved massive amounts of clothing into empty children-room closets, migrating the loads each season without wearing any of it. I was totally prepared for an office life I no longer have, completely ready to host parties I don’t host and attend parties I never get invited to.

We finally just gave up—and moved, sort of. I hired movers and stuck brightly colored Post-it Notes on the few pieces of furniture I thought would fit in the rental. Then we packed up the few items of clothing we actually wear, the plates and cookware we actually use, a few rugs and our dog’s beds.

We love our new Seal Beach home. The smaller house with fewer things feels cozier. Instead of an empty-nester mom in the suburbs, I am now, well, an empty-nester mom near the beach. But it feels entirely different. Everything is new. We’re meeting neighbors and walking to new restaurants.

But, of course, there’s a problem: A massive amount of stuff is still at the house we are planning to sell. I keep going back and forth, a 50-minute drive, but it’s always a deflating confrontation with the leftover things in the house.

While I started by giving carloads of clothes, cookware and toiletries to local charities, I thought it might make the decision-making easier if I could sell some of the things on eBay. But in describing item after item, I kept writing, “Never worn!” and “Used only once!” while wondering if anyone out there would detect the embarrassing pattern.

My husband, meanwhile, seemed to be making rapid progress in packing books to donate to the library—but then I discovered he was simply packing my cookbooks. The detritus from all of his hobbies—the conga drum, the guitars, the model planes, the electronic chessboard—and all his books remain untouched. “In my mind, I’m still going to read them,” he said defensively of the books. 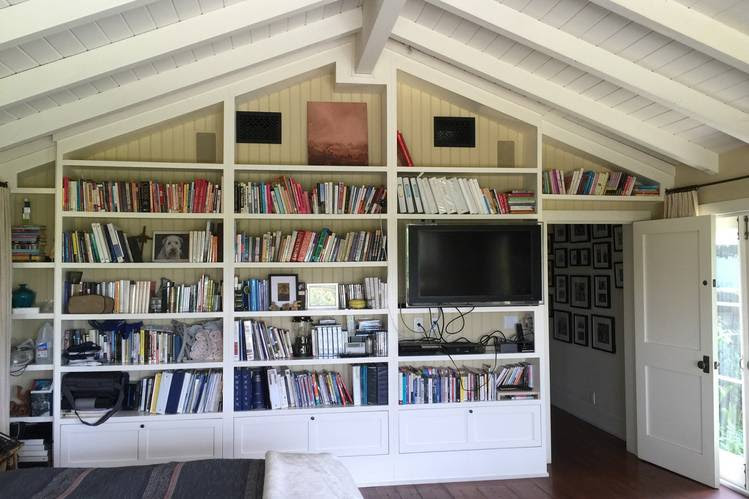 Part of the problem was the walls of books in most rooms. PHOTO: KATHLEEN HUGHES

My biggest problem is the family memorabilia. While I chronicled my efforts to scan my entire life in this newspaper a few years ago, I still haven’t been able to part with the originals—the boxes and boxes of family letters and photographs.

It was mildly comforting to discover that most of our friends seemed to be muddling through the same process and were also short on practical solutions. “Here’s what you should do,” said a friend at the gym. “Hire packers, put everything in storage and if you haven’t gone to get anything in three years, throw it out.”

That initially sounded like a terrible idea, but I’m starting to wonder.

After watching us struggle, a colleague of my husband gave us “Goodbye, Things” by Fumio Sasaki, subtitled “The New Japanese Minimalism.” At first, I felt too busy downsizing to read it. Plus, it’s hard not to notice that many of these advice givers seem to be young, single guys. Of course they have just a few items in their closets.

But after scanning the book’s “55 tips to help you say goodbye to your things,” I’m trying to apply No. 34: “If you lost it, would you buy it again?”

That answer is so often no, and I never should have bought it in the first place. And it would be a resounding no to the very large painting of a big yellow chicken leaving Cuba, purchased impulsively in Havana.

Moving forward here really means moving backward. My daughter just moved out of her tiny rental in Brooklyn. “Everything I own fit in a cargo van,” she said. “You get older and you add stuff. Now it’s like a regression to being in your 20s. You only need one baking tin!”

She’s right. We love our small house in Seal Beach, but we have a long way to go in embracing the new minimalism. My husband just returned from his second trip to buy a voice-activated garbage can.

“Tell it to open,” he said proudly.

“Open can,” he suggested.

That worked. Now we just need to learn to put more in it.

Ms. Hughes is a writer living in California and New York. Email reports@wsj.com.

2 thoughts on “How in the world do bring yourself to move “stuff” on if you’ve never used it once?”