How Feminist Dystopian Fiction Is Channeling Women’s Anger and Anxiety

On a desolate island, three sisters have been raised in isolation, sequestered from an outbreak that’s causing women to fall ill. To protect themselves from toxins, which men can transmit to women, the sisters undergo cleansing rituals that include simulating drowning, drinking salt water and exposing themselves to extreme heat and cold. Above all, they are taught to avoid contact with men.

That’s the chilling premise of Sophie Mackintosh’s unsettling debut novel “The Water Cure,” a story that feels both futuristic and like an eerily familiar fable. It grew out of a simple, sinister question: What if masculinity were literally toxic?

“The Water Cure,” which comes out in the United States in January and was longlisted for the Man Booker Prize, joins a growing wave of female-centered dystopian fiction, futuristic works that raise uncomfortable questions about pervasive gender inequality, misogyny and violence against women, the erosion of reproductive rights and the extreme consequences of institutionalized sexism.

“Building off the idea of toxic patriarchy, I decided to make it more solid and physical, because sometimes it does feel physical,” said Ms. Mackintosh, who lives in London. “I felt like I didn’t need to invent a disaster, because there was already a disaster happening.”

This new canon of feminist dystopian literature — which includes works by up-and-coming novelists like Ms. Mackintosh, Naomi Alderman, Leni Zumas and Idra Novey, as well as books by celebrated veterans like Louise Erdrich and Joyce Carol Oates — reflects a growing preoccupation among writers with the tenuous status of women’s rights, and the ambient fear that progress toward equality between the sexes has stalled or may be reversed.

[ Read this review of two new works of nonfiction about the power of women’s anger. ]

Most of these new dystopian stories take place in the future, but channel the anger and anxieties of the present, when women and men alike are grappling with shifting gender roles and the messy, continuing aftermath of the MeToo movement. They are landing at a charged and polarizing moment, when a record number of women are getting involved in politics and running for office, and more women are speaking out against sexual assault and harassment.

At a time of increased unease about parity between the sexes, both new and classic dystopian novels seem to be resonating with readers and critics. Ms. Alderman’s novel, “The Power,” a twisted feminist revenge fantasy set in a world where women develop the ability to deliver an electric shock, has sold hundreds of thousands of copies and is in development as a television series.

At the same time, readers are embracing classics of the genre that have taken on new significance in today’s political climate. Margaret Atwood’s 1985 novel “The Handmaid’s Tale,” set in a future theocratic state where women are treated as reproductive slaves, has sold more than 3.5 million copies in the United States since 2017, bringing total sales to more than five million, and was adapted into an award-winning television series.

Lately, Ms. Atwood’s imaginary dystopia has inspired real-life political activism, as protesters dressed as handmaidsin red robes and white bonnets have gathered at state capitols around the country to oppose policies that restrict women’s access to abortion and health care. In September, a group of red-robed women protested at the United States Senate during hearings for Brett M. Kavanaugh, who was confirmed to the Supreme Court after being accused of committing sexual assault, and could potentially cast a decisive vote overturning Roe v. Wade. 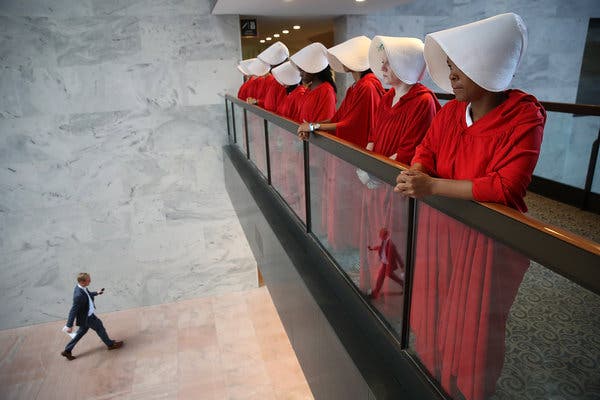 “The moment that we’re in is terrifying for a lot of women, and the story that Margaret Atwood created captures that fear so incredibly well,” said Lori Lodes, an adviser for Demand Justice, a liberal advocacy group that organized the recent protests at the Senate.

[ Read this list of novels that tackle sexual assault. ]

‘Progress Is a Fantasy’

Women have been writing dystopian fiction for decades. Some of the most influential female pioneers in science fiction and fantasy, including Ursula K. Le Guin, Octavia Butler and Angela Carter, used the genre as a framework to write about gender identity and its constraints.

The recent proliferation of feminist dystopian works builds on that body of literature, using the lens of science fiction to project current concerns onto the future, while also reflecting on the past.

“They’re in a way how-to books, or what-would-I-do books, supposing this happened to me, what would I do?” Ms. Atwood said in an interview. “The idea that history will always progress is a fantasy.”

Some of the novels are meant to serve as cautionary tales against political inaction and complacency, and as a warning that steps toward women’s equality may one day be curtailed.

In her new novel “Hazards of Time Travel,” coming out in November, Joyce Carol Oates takes an almost literal approach to exploring fears that the clock could be turned back on women’s rights. The novel opens in a future autocratic America, where students are taught that men have higher I.Q.s than women, and centers on a young woman who is arrested for treason after she raises questions about the regime in school. As punishment, she gets teleported back to 1959 Wisconsin to be “re-educated” and rendered more docile.

In Christina Dalcher’s recent debut novel, “Vox,” an ultraconservative political party gains control of Congress and the White House, and enacts policies that force women to become submissive homemakers. Girls are no longer taught how to read or write; women are forbidden to work or hold political office, or even express themselves: They are forced into near silence after the government requires all women to wear bracelets that deliver a shock if they exceed an allotted daily word count.

Ms. Dalcher, a retired theoretical linguist, said she was inspired in part by the women’s marches around the country after the 2016 election.

“I thought, there must be a ton of people who are watching this and rolling their eyes and saying, I wish they would just shut up,” she said. “What better way to force somebody into submission than to take away the one thing that makes them human, language?”

‘We Are Already in a Dystopia’

Like “The Handmaid’s Tale,” several recent dystopian novels explore how a woman’s fertility can define her worth in society’s eyes, and consider what might happen if the government mandates and controls childbearing.

Leni Zumas was struggling to become pregnant when she began writing her recent novel “Red Clocks,” which takes place in a near-future America where abortion and in vitro fertilization are illegal and embryos are enshrined with the “right to life.” The idea came to her when she was researching fertility treatments, and came across references to proposed legislation that would outlaw in vitro fertilization.

“It was very intentional to make the situation in the novel feel ordinary, and therefore more frightening,” she said. “One of the things about looking at the world through a feminist lens is that we are already in a dystopia.”

Louise Erdrich puts a more apocalyptic spin on the themes of reproduction and women’s physical autonomy in “Future Home of the Living God,” which hinges on a cataclysmic biological event that threatens the future of humanity, leading the government to round up pregnant women and seize their babies.

Ms. Erdrich began writing the book many years ago, when she was pregnant with her fourth daughter. She set it aside until shortly after the 2016 presidential election, when, with a Republican-controlled Congress and White House, liberal activists raised alarms about the potential threat to women’s reproductive rights. Ms. Erdrich began to worry about what the world would be like if the gains made decades ago through women’s liberation movements were lost.

“Fighting for women’s rights is an unrelenting battle,” Ms. Erdrich wrote in an email. “I saw that my daughters might have to live with the steady erosion of human progress.”

‘Worse Than What’s Happening in “The Handmaid’s Tale” ’

The surging interest in female-centered science fiction has spread beyond North America and Britain. While Western novelists are using dystopian tropes to explore what might happen if hard-fought advancements for women’s equality are reversed, some writers from the Middle East and Asia have turned to dystopian fiction to highlight the oppression of women in the region.

Maggie Shen King’s debut novel, “An Excess Male,” takes place in China in 2030 and imagines the aftermath of China’s former one-child policy, a rule that led to sex-selection abortion of female fetuses. In Ms. Shen King’s novel, the policy has resulted in a surplus of 40 million men who can’t find wives, and women are forced by the state to marry multiple husbands.

A similar thought experiment drives the Pakistani writer Bina Shah’s new novel, “Before She Sleeps,” which unfolds in an autocratic southwest Asian country after a nuclear war has caused a genetic mutation that unleashed a deadly strain of cervical cancer, killing millions of women. As part of a government effort to rebuild the population, women are forced to marry multiple husbands and required to take fertility drugs that cause them to give birth to triplets and quintuplets. Ms. Shah got the idea of a “gender crisis” from news reports about sex-selection abortion and female infanticide in India and China. She envisioned a society, like many traditional and tribal ones, that prizes women as “precious resources,” but still oppresses them.

“In patriarchy, women are always going to end up being the losers,” she said. “What’s going on now in Saudi Arabia, Pakistan and Afghanistan is worse than what’s happening in ‘The Handmaid’s Tale.’”

For Ms. Atwood — who has become a sort of patron saint of feminist dystopian fiction, heaping praise on younger writers who are expanding the genre — it has been both inspiring and unsettling to see the resurgence of interest in “The Handmaid’s Tale,” as women’s rights activists have taken up the language and imagery from her novel as a cultural shorthand for misogyny.

“When I wrote the book, I wished we would not be in a situation where these protests would become necessary,” she said. “There’s certainly a very concerted push toward making women’s bodies a possession of the state in the United States.”

On the other hand, Ms. Atwood is comforted to see a growing number of people reading, and writing, dystopian fiction — a scenario that would be impossible under a real totalitarian government that banned free expression.

“The mere fact that you can read it means we’re not there yet,” she said.