I’ve regularly been dragged into reading Chinese bestsellers, particularly in the sci-fi/fantasy realm, and so far have found myself having a tough time seeing the thrill. Am halfway thru the first of a trilogy by Zhou Haohui that again simply doesn’t translate, even tho in English. Perhaps our cultures are simply too alien to each other so far. Here’s a review on NPR that discusses the reader’s block.

Another less-recent example is “The Three-Body Problem” by Cixin Liu which left me puzzled and wondering where the rest of the plot was. I apparently still need a leavening of Western influence added to my Chinese fiction. For example, I’ll happily pick up anything by Ha Jin, e.g., “Waiting” from 1999, which won a National Book Award and the PEN/Faulkner Award, but the author is Chinese-American rather than centered solely in China. Similarly, “Balzac and the Little Chinese Seamstress” by Dai Sijie, is semi-autobiographical and set in the time of the Chinese Cultural Revolution, but was published in French and English.

In ‘Death Notice,’ The Thrills Don’t Quite Translate 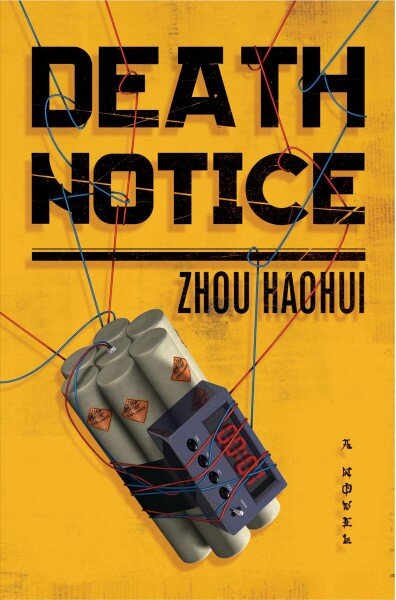 Humor is notoriously liable to get lost in translation, but the monster impact of Scandinavian noir indicates that with sufficient depth and finesse, crime fiction can successfully cross borders. That’s the test put to author Zhou Haohui, whose high octane thriller, Death Notice, is doing Dragon Tattoo-level business in China and has just come out in the U.S.

On the opening page, an anonymous taunt starts things off with a stinging slap: “I smell your eagerness,” it reads. “Your anger. Even your fear.” The tension cranks up from there — but the transition from China to America proves a bumpy ride. The essential act of taking of a human life is the same all over the world, but the cultural prism through which that act is viewed can distort, enlighten or mystify — fans of Lisa Scottoline or James Patterson, Lee Child or David Baldacci might be intrigued by Death Notice, but they may not be swayed.

We begin a deep dive into the procedural world of police in Chengdu, the capital of Szechuan province. The action in Death Notice, translated from the Chinese by Zac Haluza, follows police as they try to head off a mysterious vigilante killer. The serial nature of the murders perplexes the cops, as does their grotesque execution. The first few pages introduce a “human gargoyle” with “scars the color of mud” and an upper lip “split at the center, giving him an oddly rabbit-like appearance.” Soon, the detective who has paid a call on this odd creature is found dead. Though the cop is killed by a cleaver to the head, Zhou characterizes his murder as “a dagger through the heart of every police officer.”

Death Notice becomes an ensemble piece, with a band of complementary characters that tend toward cardboard, some more corrugated than others, but all a tad flat — there’s the captain and his assistant, a jokester digital whiz, and of course a token female psychologist brought in to assess the psychopath’s motives.

And then there’s Captain Pei Tao, an officer from another city, who brings with him experience of a cold case from 1984 that winds up driving the investigation. It seems Pei and his then-girlfriend dreamed up a prank that would involve sending “death notices” to random folks who have annoyed them or simply attracted their notice. But then Pei’s girlfriend — and his best friend — were killed in an explosion before he could save them.

Then, almost 20 years later, a criminal signing himself Eumenides (another name for the ancient Greek Furies) brings back the death notice business, making seemingly arbitrary choices about who to threaten — all while leering, amoral internet commenters exacerbate the already dangerous situation. One death notice, for example, cites “road rage, second-degree murder, abuse of the legal system” and states that the victim’s punishment will be levied on October 23. Despite every effort on the part of the task force, Eumenides commits the murder on deadline. The innocent prank has turned deadly.

What blows up big in China may prove to be a damp squib elsewhere — but some readers just may feel footsteps treading upon their own hearts.

Some of the language in Death Notice can be off-putting to ears trained in the hardboiled emotions of American shamuses and bulls, where it’s well understood that there’s no crying in noir — at one point, the author describes Pei having an emotional outburst, as “tears as thick as raindrops covered his cheeks.” And just before a killing, Zhou takes us into the command room, writing that “with every step [the victim] took, they could feel her feet treading upon their own hearts.” Elsewhere we hear about the “grim sense of shame” that afflicts officers unable to solve the crime.

Law enforcement, of course, differs from country to country. In Death Notice, the constabulary’s arsenal is outdone by pretty much every video game in existence. “‘A sniper rifle,’ Yin squinted. ‘Where do you think we are, Washington, D.C? Not even our department has that kind of equipment.'”

Even without the firepower, plenty of blood gets spilled in this novel, gore that is ultimately avenged by the crackerjack cops. After an ending as satisfyingly twisty as a cursive ideogram, we are ditched on the mean streets of Chengdu, ready for the sequel. Overall, though, Death Notice suffers somewhat from an irony deficiency. Tone wobbles abound, with romantic flourishes undermining the noir. What blows up big in China may prove to be a damp squib elsewhere — but some readers just may feel footsteps treading upon their own hearts.