A Genius Method for Making Latkes

Joan Nathan has found the crisp potato pancakes of her dreams, inspired by Swiss rösti.

A few months ago, I had brunch on the lawn at the Outermost Inn on Martha’s Vineyard, in Massachusetts. So happy to be at a restaurant after months of quarantine, I ordered the potato rösti, which arrived thick and square, topped with smoked salmon and crème fraîche. When I dipped my fork into the potato, I found that it was crisp on the outside and moist on the inside. And when I put a morsel in my mouth, I realized that this was the flavorful latke of my dreams.

I talked with the chef Nathaniel Wade, who explained the technique he’d used for the Swiss rösti. He had learned it at Misery Loves Co., a restaurant in Winooski, Vt., that he ran with his sister and brother-in-law before he left for Martha’s Vineyard.

“You want to dry the potato, but you don’t want to cook it through,” he said. “So you have starch, but not too much.”

I did what he suggested, baking the potatoes until some of the moisture had cooked out, but they remained raw in the middle. The technique worked perfectly.

I also followed his suggestion of grating the baked and cooled potatoes by hand. My food processor is always on the counter, but I was testing the recipe at my son’s house, where it’s stored in a closet. For four potatoes, I thought, why bother taking it out? Using a box grater carried me back to memories of my mother and my grandmother, who made potato pancakes in a world before the food processor. And holding the baked potato skins protected my fingers against cuts from the grater.

But I made some changes. Instead of pressing the grated potatoes on a sheet pan into a large rectangle, thicker than hash browns, I formed them into individual round patties like proper latkes, left them on a plate, and refrigerated them for a few hours. Because the potatoes were almost cooked through, I did not have to worry about oxidation: The latkes remained perfectly white. And since they went straight from the fridge to the frying pan, they crisped easily without needing to deep-fry them.

I might even dare say they are the best version of latkes, though that would be presumptuous since taste is so personal and purists might fret that there is no binder like matzo meal, onion or egg in them. (If you are vegan or gluten-free, this is the latke for you.)

The result is just pure potato with a little salt and pepper and, if you want, saffron or rosemary. Serve it for Hanukkah with brisket or top it with smoked salmon, crème fraîche and chives, or treat it as a blank slate and let your imagination take you where it will.

“The cool thing about it is you can put anything on it,” Mr. Wade said. “You can put peanut butter or chocolate on it, and it will still taste good.” 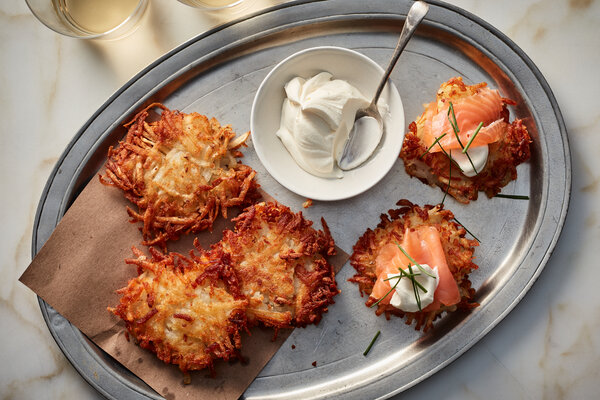 COMMENTS
How about partially cooking whole potatoes by microwaving them for five or six minutes, then allowing them to cool?

We’re eager to try this recipe, as is, though we’ll leave potatoes unpeeled — as has been our custom for years when using other recipes. Peels add crunch and flavor to latkes.

Onions are the heart of the latke. Why not add some grated onion?

What an effort! I made latkes last night and it did not take hours. I just grated potato and onion (by hand) squeezed out the water, salt, pepper, a little flour mixed with baking powder and fried them up. They were delicious and easy.

I par-cook my potatoes for roasting to get a divine outer crunch and a melting interior – but never thought of doing the same for latkes. Brilliant! I’ll use yukon gold (thin, delicious peel which I’ll leave on) – and microwave for 5 minutes, which will have the same effect as roasting. I won’t add onion (without a binder that might be tough) – but topping with *caramelized* onions and creme fraiche or sour cream? Yum!

I don’t think microwaving the potatoes would work. They don’t dry out when cooking in the microwave. They need to be dry baked, long enough to release moisture. That’s why potatoes cooked in a microwave don’t taste or feel or smell like baked potatoes. A toaster oven should work; I’ll try it.

Onion is the heart of latkes but clearly adding fresh grated onions increases the risk of “unbinding” the patties before or during frying, as grated onions release a soapy liquid. Maybe try adding some dry onion powder to the mix .

I think clearly the problem with onion here is that that would add moisture, which would require a binder like egg, which means you just make them the way you’ve always made latkes. This is a different latke, but don’t tinker with it – one thing I’ve learned over decades of cooking from her books and one lucky time cooking with her — don’t ever second-guess Joan Nathan!

I’ve been making latkes with parboiled potatoes for years. I do use onion, egg and matzoh meal (or flour). The batter doesn’t turn dark, and it avoids the semi-raw flavor latkes sometimes have. Might try the baked potato version to see how it compares.

45 minutes at 350 is too long and baked ends of some potatoes through (especially smaller ones). I’d reduce bake time by 15 minutes. Also 8 latkes from 4 potatoes are too few and the resulting latkes are too big (1/2 potato each). Aim for 12 slightly smaller latkes for better crisp and crunch through the center.

2 thoughts on “Yet another method of making latkes”